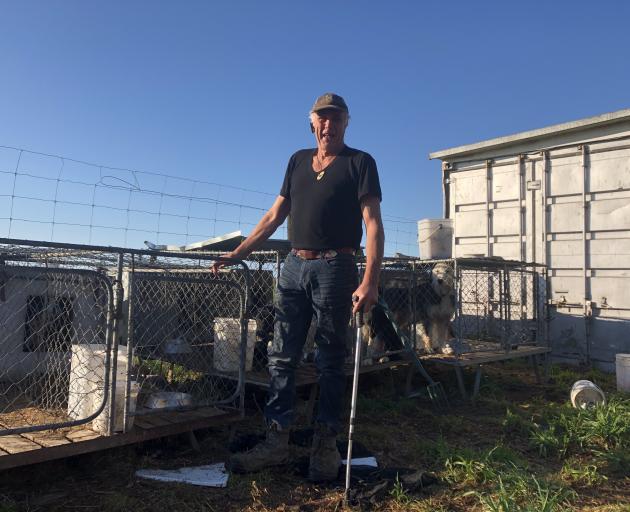 David Hanford Boyes became 78% paraplegic after a fruit-picking accident crushed three vertebrae in his back. PHOTO: GEORGE CLARK
A South Canterbury-based farm hand hopes to shed light on people with disabilities who have been overlooked for employment.

Timaru’s David Hanford Boyes has no balance and requires a walking stick to move.

While picking fruit in Australia in 1996, he was swept off a ladder by a branch and fell to the ground, crushing three vertebrae in his back.

Mr Hanford Boyes said he was lucky to have leading surgeons in Melbourne at the time offering a surgery not before tried on humans.

"I was lucky enough to be the first person in the world to have an operation where surgeons believed I would be able to walk again if they tried it. The only thing they could tell me was that it had worked on monkeys."

The 67-year-old has been farming and driving heavy vehicles most of his life and said he was proud to continue to do so today.

This past month he had been a general hand, tractor driver and stockman on a station in the Mackenzie district.

While he cannot jump out of a tractor or vehicle quickly, he has dogs that often do a lot of work for him.

He must continue to work in order to keep moving or his legs will atrophy.

"There are ways of doing things as a disabled person, especially in this day and age. When I am operating a vehicle my disability basically disappears."

Nicknamed "Wobbly", because of the way he walks, he can use his thighs while his feet are behind pedals.

"I do have to sit higher than the average driver, so that my butt is above my knees. But I can operate a truck."

His ability to work in some jobs had been disputed but Mr Hanford Boyes said he had continuously provided proof of ability.

"To me, it seems that people with disabilities who are qualified to work are basically ignored," he said.

"I have been lucky enough to have some really good bosses but I know there are people in the community that are encouraged to stay on the sickness benefit."

Mr Hanford Boyes believed business would rather not hire someone than bring their safety infrastructure up to scratch.