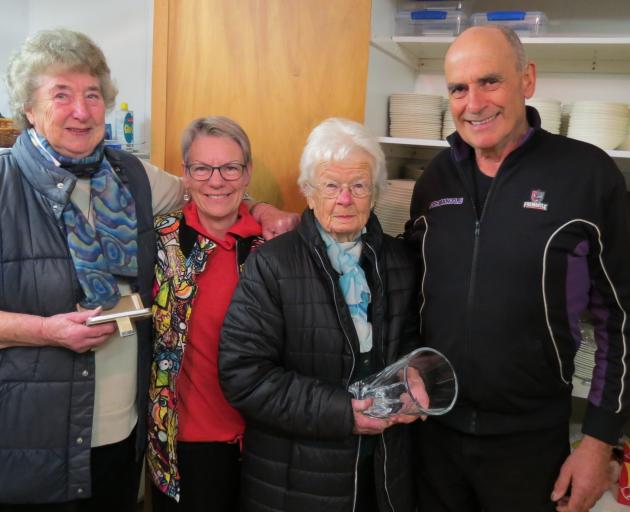 The Millers Flat Hall kitchen has been run by Daphne Crawford for many years as part of her role with the Millers Flat Hall Committee. From left is Betty Adams, committee member, secretary Christine Young, Mrs Crawford and chairman John Asher. PHOTO: YVONNE O'HARA
People who volunteer to sit on local committees "keep the wheels turning," in farming communities, says 90-year-old Daphne Crawford.

Mrs Crawford is a wheel-turner from way back and is the "pixie caramel" of the Millers Flat Hall Committee.

She has served on the committee for 52 years, for most of that time as its secretary, and her service was recognised with a presentation of a crystal vase from chairman John Asher last week.

"She is the pixie caramel of the committee, the member that is longer lasting," Mr Asher said.

Mrs Crawford joined in 1947 and was also treasurer for a short time.

Although she withdrew from the secretary role at its annual meeting in June this year, she is still involved.

She was surprised at the presentation.

"If I had known, I wouldn't have come," Mrs Crawford said.

"I don't know what to say, but over the years I have probably said it all.

"So long as I have got two legs and two hands I'll still keep coming." 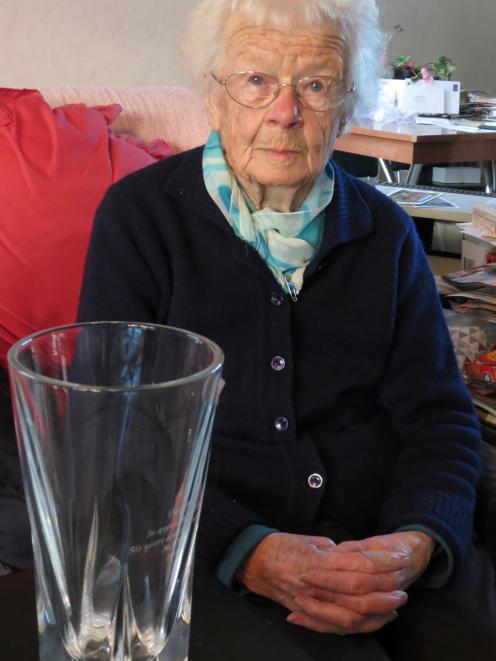 Daphne Crawford, of Millers Flat, was surprised when she was presented with a crystal vase to mark more than 50 years of service to the Millers Flat Hall Committee recently. PHOTO: YVONNE O'HARA
Committee member Betty Adams said Mrs Crawford was dedicated and probably the longest-serving committee member, who kept perfect records and ran the catering arm of the committee.

"On many occasions Daphne orchestrated [functions] to make sure everyone was well fed and well watered," Mrs Adams said.

She remembered when the hall renovations were under way during 1983, Mrs Crawford climbed into a cupboard to make sure it was big enough.

Farmer and committee member Peter Macdougall said the 50-plus years of service was "incredible".

Mrs Adams said when Daphne got tired of the hall tea towels going missing, she embroidered the hall's name on them to ensure they stayed in the kitchen, but that did not work as there were none of the original ones left.

Mr Macdougall said there was one still in his woolshed and it had been there since 1980, when Mrs Crawford catered for a party to watch Halley's comet.

Mrs Crawford agreed to be secretary on June 15, 1971 and remained in the role until June this year when she decided to step down.

She said someone at the annual meeting said "Of course you will be secretary again."

"Betty said I should have told her but I did not know myself until then [when the question was asked]."

She then worked at the Otago Electric Power Board office in Milton.

She met husband Harry and moved to their land, Crawford Gardens, near Millers Flat, where they grew strawberries and raspberries, which the local school pupils picked.

Later they established their orchard and grew Moorpark, Trevatt and Roxburgh Red apricots and peaches.

The fruit went to Invercargill by truck and they also supplied apricots to Roxdale factory, Roxburgh, for jam.

"Some kids wanted to work.

"Some kids didn't, and the kids who didn't want to work, ate the most."

She and Harry had two children, Laurie and Denice, and she has six grandchildren and 10 great-grandchildren.

One of her focuses has been the hall's catering committee, which has supplied food for weddings and other functions, as well as the bus farm tours from Australia and America, to raise money for the new roof and cladding.

She said the hall was used by most community groups.

"The Central Otago District Council had said, of all the halls in the region, it was used the most.

"It is the focal point of our community."

She said it was important for the community's committees to attract new members and it was increasingly hard to persuade younger people to join.

"It is the older ones who volunteer and keep the wheels turning," she said.