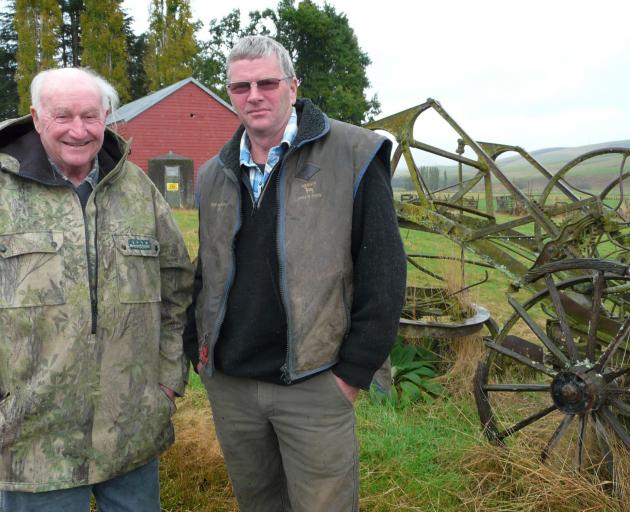 Father and son Maurice and Tim Kempthorne are looking forward to making their family's more than 100 years of farming Spylaw Valley at next month's Century Farms event in Lawrence. Photo: Richard Davison
Here's to the next 143 years.

Not just farming, but farming a particular patch of rural paradise is a way of life for one West Otago family.

The Kempthornes, of Spylaw Valley, near Heriot, have been farming sheep and beef on the same 530ha of hill country and river flat since 1876, and will be among 40 rural New Zealand families marking their toil, perseverance and successes at next month's Century Farm awards in Lawrence.

The annual awards - which this year take place over the weekend of May 24-26 - honour farms that have remained in the same family for 100 years or more.

Father Maurice and son Tim Kempthorne are confident there will be at least one more generation of Kempthornes striding the farm's tussock-clad hills.

"Tim's got a great couple of girls," Maurice said. "You see them out on the bikes heading up the farm after a mob of sheep, and mucking around with the animals, and it gives you hope for the future."

Isobelle (12) and Sophie (8) had the love of farming in their blood, Tim said.

"Perhaps passing the farm on down the line is a bit of a dying tradition with the value of farms nowadays, and the temptation to break them up and cash in, but why not? We'd love to see the traditions carried on."

In common with other long-standing family farms, Spylaw Valley's history served as a microcosm of rural history, Tim believed.

"You listen to some of Dad's stories and it's the story of New Zealand, as it came up through history. Events like this [Century Farms] mean there's a permanent record of that history that can be passed down the generations. Otherwise it gets lost, and a family's sense of place with it."

Originally settling "just over the hill", forefather Edward Kempthorne first established a property at the Heriot end of what became Kempthorne Rd, before in 1876 acquiring extensive valley blocks.

That year, a small homestead was built on the valley floor. It was extended in 1908 and remains the family home today.

"Back then there was a team of about 10 Clydesdales they used for crops of swede and oats. Although machinery was introduced down the years, horses were still used for some work right through the Second World War, and beyond," Maurice said.

As the families of farm workers and local residents began to grow around the turn of the 20th century, Maurice's grandfather Silas established a school on the farm.

"It had about 18 pupils at its busiest. The headmaster lived on the farm and headed up the hill on his horse every morning."

The farm had been responsible for its fair share of innovations locally, Maurice said.

"We had the community sheep dip for many years, and were the first to introduce winter shearing and aerial lime spreading in the 1950s. Now you wouldn't think twice about it."

The farm had been "kind" to the family, and neither father nor son would give up the area.

"The climate's ideal, the land's fertile and the view's pretty good too. Why would you go anywhere else?"