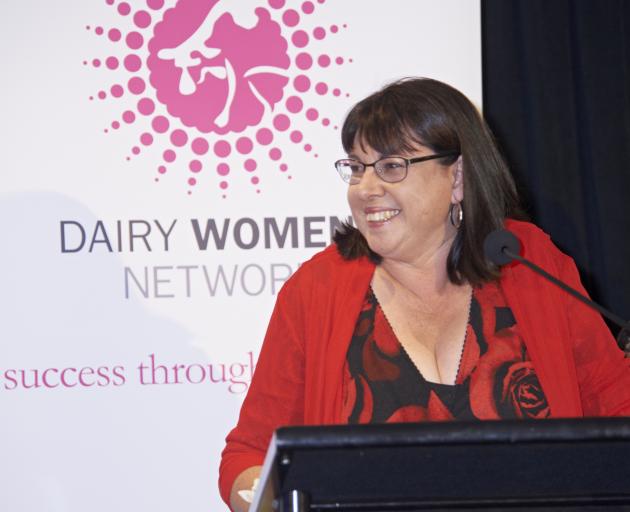 Wreys Bush dairy farmer Katrina Thomas is looking at new opportunities after resigning from her role as Dairy Women’s Network southern regional hub leader for Otago and Southland last month. The photo was taken during a DWN conference in Queenstown in 2017 when she received her Dairy Community Leadership award. Photo: Supplied
‘‘It was like being dropped into the mothership of emergency management.’’

That is how Katrina Thomas describes her involvement with the recent flood recovery effort in the South.

However, this year she decided she wanted to try other challenges.

The Southland Rural Support Trust approached her to see if she wanted to help southern farmers recover from the extensive flooding that took place in early February.

She was offered a short-term Ministry of Primary Industries-funded contract with the trust, managing social media and communications to ensure there were consistent messages being released.

She also utilised her extensive list of contacts as part of that role.

‘‘The trust approached me as they knew I was going to be available.

‘‘I wanted to find new challenges and this was an opportunity to transfer my skills within the agri-sector.’’

After four weeks her role was winding up - while she did not know what her next job would be, she was aware of several opportunities she would like to be involved with.

In the meantime, she was working on the dairy farm at Wreys Bush with her husband James.

The couple converted their property from sheep to dairy in 2011.

Before that she had spent 20 years working in the tourism sector but had little knowledge of dairying.

She joined the DWN to learn more, first as a member and then as a regional leader.

She won the DWN Dairy Community Leadership award in 2017.

She has also had input in the Dairy Women's Network's activities as a social media assistant.

‘‘I learned far more about cows through the DWN than I would have [if I had not joined],’’ she said.

‘‘The learning curve [from sheep to dairy cows] was very steep but it has been a fantastic journey.’’

She was stunned to be called up on stage and honoured for her work.

‘‘They got the Southland (DWN) crowd up along with Cathy Brown, who is the immediate past chair of DWN trust board.

‘‘They talked about working with me and shared stories, which was a huge acknowledgement, which was fantastic, a wonderful thing,’’ she said.