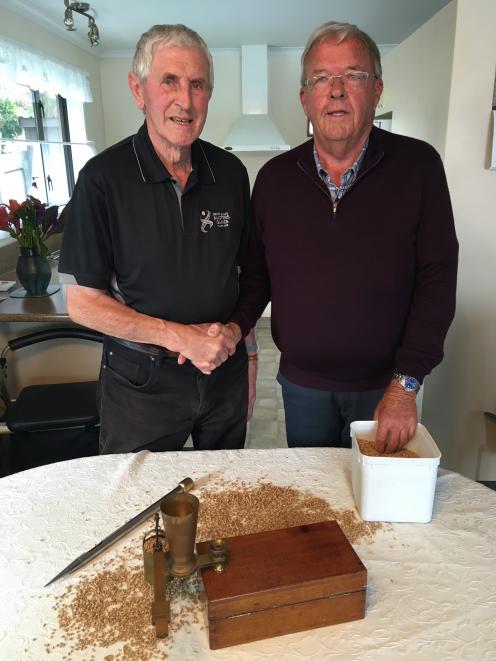 Temuka and Geraldine A&P Show grain judge Lindsay ‘‘Slim’’ Green (left) hands over to new judge Geoff Tubb. PHOTOS: CLAIRE ALLISON
As a child, Lindsay Green was fascinated when he tagged along with his Waitohi farmer father to buy grain from the local CFCA.

But with health issues limiting his mobility, this was to be the year that 86-year-old Mr Green handed over the judge’s reins to Geoff Tubb, a 52-year veteran of the grain and seed industry throughout South Canterbury and North Otago.

An increase to Alert Level 2, however, has seen the show cancelled a week out, and Mr Tubb now has a year to prepare himself to step into the big shoes of Lindsay "Slim" Green.

Grain convener Warren Stratford said Mr Green had been a longtime loyal judge for the show.

"We’ve pieced it together that it’s been 31 years . . . and Slim might have missed just two shows in all that time.

"I think it’s nice that someone born in Temuka took an interest in the local show, and I think that’s commendable and needs to be acknowledged, that 31 years of loyal service.

"Another thing that thrills me is that Geoffrey Tubb will carry on — he’s another local and I think it’s wonderful that these people want to put their bob’s worth into the show. I’m so appreciative."

Mr Stratford said Mr Green would turn up to the show each year with his brass measuring equipment tucked in its wooden case under his arm.

Mr Green says he will miss the show. 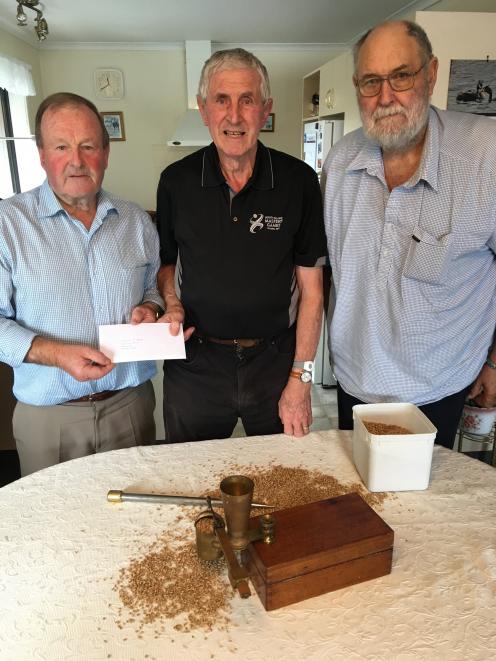 Temuka and Geraldine A&P Show grain convener Warren Stratford (left) hands over a thank-you gift to grain judge Lindsay Green (centre), while former convener Max Millar, who brought Mr Green on board, looks on.
"A lot of the grain boys, they’d come to say gidday and check that we were doing the right thing."

Taking credit for getting Mr Green on board is former grain convener Max Millar, who said he chose well, despite not even knowing what Mr Green’s real name was.

"Somebody suggested Slim, so I asked him, and he just carried on doing it forever. He was very good, very thorough.

"And he was well respected by all the farmers in the area. They’d come in and have a yarn with him."

Mr Green would cast a well-trained eye over the entries, smell them, feel them, even squeeze a handful. Narrowing entries down, he would then pull out the weighing equipment before identifying the pick of the crop of entries.

He has had that eye for seeds since he was a little boy tagging along with his father to buy seeds at the CFCA store in Temuka.

"Clovers always took my fancy, they were beautiful seeds in those days."

So when it came time for a young Lindsay to enter the workforce, it was fortunate there was a job going at New Zealand Loan and Mercantile’s seed store in Washdyke.

In 1952, the 17-year-old’s first job was treating grain. There were no masks, and arsenic and mercury were among the products used.

He stayed with the company through various mergers and new names — in the early 1960s, the company merged with Dalgety’s — and took over the foreman’s job in 1962, living in the company house out the back of the property for 27 years.

A move to bulk handling came in 1967, farmers had silos on farm, and the grain merchants swapped sacks and sack barrows for boxes, pallets and forklifts.

Mr Green moved down the road when the Loan and Mercantile site was sold to Tregenzas, to the CFCA site opposite the intersection of State Highways 1 and 8.

The business was eventually to become Seedlands, and he worked out his time there until 1997, when he retired at the age of 62.