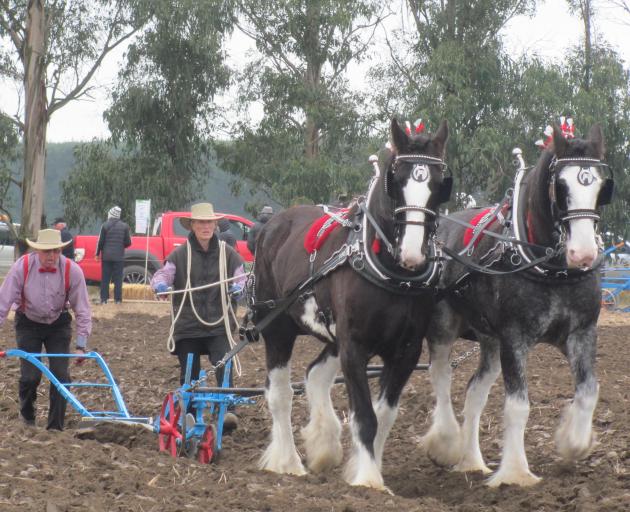 Title winners John and Sharon Chynoweth, of Oxford, show their winning form in the 2019 horse plough championship.
Ploughmen Bob Mehrtens, of Timaru, and Scott McKenzie, of Clinton, will represent New Zealand in the World Ploughing Championships in Russia next year.

The men were declared the reversible and conventional silver plough winners, respectively, following the New Zealand Ploughing Championships in Chertsey on May 11 and 12, after a computer error caused a delay in official results being known.

New Zealand Ploughing Association president Willy Willetts apologised to competitors for the error, which was made in the points programming system and affected the overall results announced at the awards evening.

The other national titles went to vintage ploughman Paul Houghton, of Hamilton, and horse ploughers John and Sharon Chynoweth, of Oxford. Neither of these two classes attends the world event.

Mehrtens, the defending reversible champion, is no stranger to the competition. It was his 41st time competing at the national championships, an event he has won 11 times now.

Defending national ploughing champion Bob Mehrtens, of Timaru, has done it again, winning his 11th national reversible title.
He is due to leave for the United States in a couple of weeks to compete at the World Championships in Minnesota.

That is his prize from last year's win, which he will attend with Ian Woolley, last year's conventional winner.

Up against four other competitors in this year's nationals, Mehrtens scored a final tally of 406.5 points, well ahead of second placed Ashley Seaton, of Courtenay, on 388.5pts. Third was Malcolm Taylor, of Putaruru, on 376pts.

In the heavily contested conventional silver plough competition, with 15 competitors, McKenzie scored 360.5, second was Kelvin Stokes, of Taupiri, with 355pts and third Mark Dillon with 335.5pts.

In the vintage plough Houghton got 341pts, second was Pearce Watson, of Ashburton, with 337pts, and John Stalker, of Lincoln, took third with 335pts.

In the horse plough, the Chynoweths scored 371.5pts, convincingly ahead of second placed John Booth, of Ashburton, on 292pts and third Paul Eaton and Des McGregor, of Dipton, with 255.5pts.

The event, hosted by Rakaia Ploughing Association members, drew 40 competitors from around the country compete across the four classes, at the Wilkinson Farm, in Wilkinsons Rd, Chertsey.

The Wilkinson farm, ''Higham'', which has been in the family since 1876, is run by fifth-generation family member Kate Wilkinson.

It is a sheep and crop farm spanning 546ha. About 32ha, or three paddocks, were used for the ploughing championships.

There was also a new Young Farmers members competition, trade displays, a barley to grass challenge (using high-powered modern machinery) and the Mid Canterbury Vintage Machinery Club had a display of machinery from yesteryear.