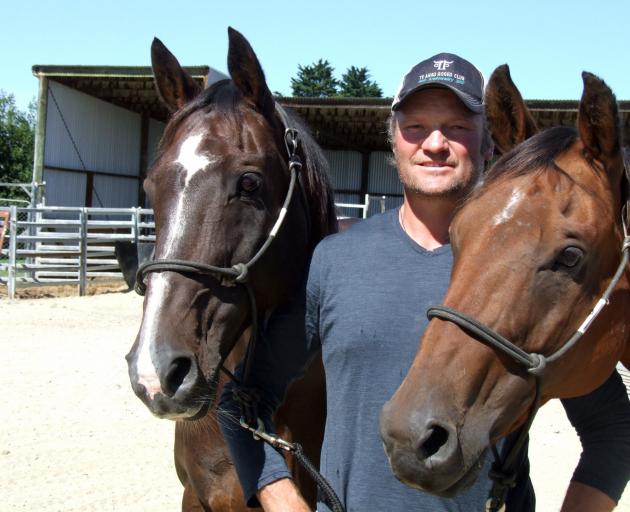 Greg Lamb at home on his Wendon Valley farm with his hazing horse Rocket (left) and steer wrestling partner Ace. PHOTO: SALLY RAE
As the rodeo season continues around the country, Southland farmer and cowboy Greg Lamb has overcome a few hefty obstacles to get back in the saddle again. Business and rural editor Sally Rae reports.

That sums up Greg Lamb, a Southland sheep and beef farmer and rodeo champion who has battled injury — and a brain tumour — while pursuing and succeeding in the sport he loves.

Mr Lamb (43), who farms near Waikaka, might be a bit banged up at the moment — he hit the ground with his shoulder "fairly hard" at Wairoa rodeo last month, fracturing his shoulder blade, four ribs and a vertebra — but he is focused on making a return this season.

There’s not long to go; the inspirational cowboy acknowledged he would not be right for the Waimate and Maniototo rodeos this weekend (February 27 and 28) , but he was working on building up his strength to tackle the tail-end of the season.

With the two-day Waimarino rodeo at Raetihi on March 20 and 21 and then four rounds at the National Finals in Taupo on April 3 and 4, there was still the potential to win some money and his ultimate goal of a second consecutive national steer-wrestling title.

His wife Jess (often referred to as Ding) asked him recently if he thought he was going to be fit enough by Raetihi. 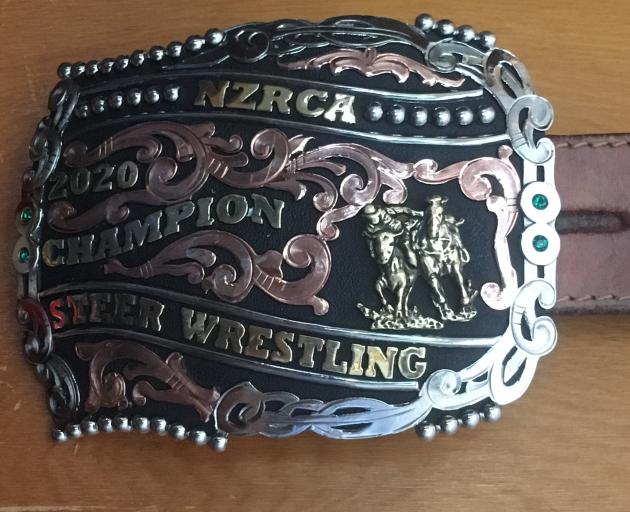 A buckle and saddle (below) were awarded to Greg Lamb for winning the 2020 national steer wrestling title. PHOTOS: SALLY RAE
For looking forward is something that Mr Lamb does and what has got him through various injury and health challenges.

"What’s that next thing, that’s how I work. Keep going forward, otherwise you get stuck in a hole," he said.

Injuries were nothing new for the cowboy whose lengthy list includes a shoulder reconstruction, two knee reconstructions, a fractured ankle, and a dislocated and fractured hip.

But his biggest test was four years ago when an MRI scan revealed a brain tumour — "that was the one that rolled me," he said.

The diagnosis followed headaches he had been experiencing similar to migraines, which could be "banging away for half a day".

He was prepped for surgery in Christchurch the night before his operation was scheduled, when a young patient was admitted in a serious condition and he got pushed back to another date. 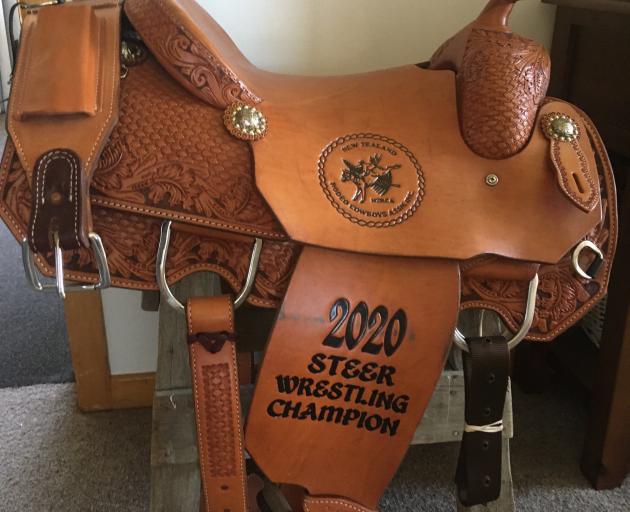 So he promptly rang the secretary of the Te Anau Rodeo Club to see if he could make a late entry.

He acknowledged he had struggled with the diagnosis and what it potentially meant he was going to be able to do. So entering the rodeo was to "keep myself right".

It was to be a special day, as he won the steer wrestling and his sister Kerry won the open barrel racing event. A week later, the tumour was removed.

Reality set in when his children — Stevie (now 8) and Mac (7) — came to visit him after the operation.

"Seeing the shock on their faces when they saw me really knocked me around a bit ... they were scared. It was pretty tough, eh," he recalled.

His speech was not initially too good and part of his face dropped for several months but the nerves grew again and it was no longer really noticeable. One eye was a little bit slow.

He was now totally deaf in his left ear, as the surgeon went through his ear to get the tumour out, and he had a hearing aid.

One aspect of being resilient was setting "wee goals for yourself". Every day he did that, whether it was standing a little bit longer, or starting to feed himself.

Medical professionals suggested he should not be riding horses because they feared his balance would not be up to it.

But he was always going to get back on a horse and get back to steer wrestling. Never ever did he think he would chuck it in.

"It’s fairly addictive. You’re only here once, you’re a long time not doing it, so you’ve got to make the most of it," he said.

After a break from rodeo, Mr Lamb made his return to the sport at his local Mataura rodeo where he won the steer wrestling competition. That was a good feeling. 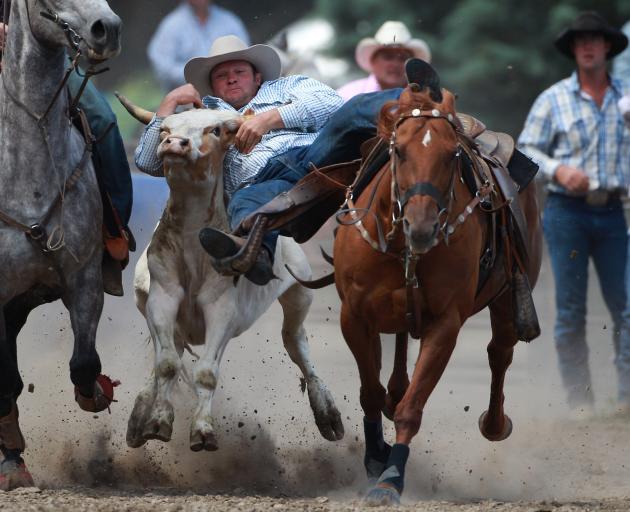 Greg Lamb in action during the open steer wrestling at the Millers Flat rodeo in 2011. PHOTO: GETTY IMAGES
He won the national steer wrestling title for the 2019-20 season and his aim was always to win three consecutive titles.

"To do three in a row would be the ultimate for me, back to back to back, to prove to yourself and other cowboys it’s not just a one-off."

And it was at the national finals where competitors found out whether they were a "champion or a choker" — "that’s what I strive for, just to be up among the best, and to beat them on that day is what you look for," he said.

Another important factor was winning on horses which he had produced himself and that was something he held in high regard.

Asked what made him want to leap off a horse at speed and wrestle a steer to the ground, in the fastest time possible, Mr Lamb said it was all about "that buzz".

Sometimes the transition from travelling at 60km an hour on to the animal went as "smooth as silk", sometimes it didn’t — "it just depends how well you do your job".

And stockmanship was a big part of that; a skill that was imparted to him by his parents. His mother Ngaire — who remains a huge help with his horses — was a well-known showjumper, and his late father, Jeff, was a rodeo pick-up rider and won a steer wrestling title.

Greg — who is fifth-generation on the land — grew up at Glenham, where he was surrounded by horses.

He rode ponies when he was young but broke his collarbone, and equine pursuits were halted until he was in his teens. Motorbikes and karts took their place in the interim.

Always country orientated, and with a love of machinery, farming was always going to be part of his career plan.

After leaving school, he worked in a motorbike shop for a year in Edendale and then went to Telford for a year, which was probably responsible for setting him definitely on the farming path, he said.

He spent a couple of years driving tractors in Australia during harvest, and he later worked on a conveyor, and then on a scanning run which he ended up buying.

That set him and his wife Jess up to get ahead in farming. They had sold the cattle side of it and now just did sheep pregnancy scanning.

They farm sheep and beef on two properties, with a total of 260ha, including some trading, fattening and grazing.

Jess Lamb is a beauty therapist who has become involved in hands-on farm work when her husband was away.

She did not grow up on a farm and she had done ‘exceptionally well" with both the practical and stockmanship side of farming, Mr Lamb said.

"What we do here with rodeo and scanning, you can’t do it by yourself," he said. Whether that was his wife helping on the farm, or his mother with the horses, he was very grateful to have that family support.

Greg’s own rodeo career started with riding calves and, apart from injuries or during stints overseas, he had not really stopped.

"The wheels are too slow now [for those]," he quipped.

He was named pick-up rider of the year in 2009-10 and again in 2013-14 and he has represented New Zealand twice in a transtasman teams competition at the Sydney Royal Easter Show.

He is also the steer wrestling stock contractor for the South Island, supplying the cattle throughout the island for rodeos, and is president of the Mataura Rodeo Club.

When he was scanning sheep, sitting on a seat for 60 days, his mind was invariably on rodeo; thinking about how he was going to get the steers ready, get his horses better, how he would steer wrestle better, and now, increasingly, about how to get young people going and get horses for them.

Mr Lamb acknowledged he had got a lot of help when he was starting out in the sport and now, helping others get into it, was "another kick you get out of it".

He recently hosted a group of young people at his arena and he enjoyed seeing them improving. He also lent his horses to young competitors.

It was the family aspect of rodeo and the camaraderie that he also enjoyed. "People have got to help you in this sport, you can’t do it yourself."

And that support had been evident in the messages and offers of help through his own health and injury battles.

As for the question of retirement? It was not happening yet but, when the time came to give away steer wrestling, he had thought about the likes of car racing — "something that’s still got plenty of speed involved".

But when that day came, it would not signal the end of his rodeo career.

"I’m going to rodeo for the rest of my life, whether it’s running stock or contracting, being involved in it. I love the horsemanship and stockmanship side of it."