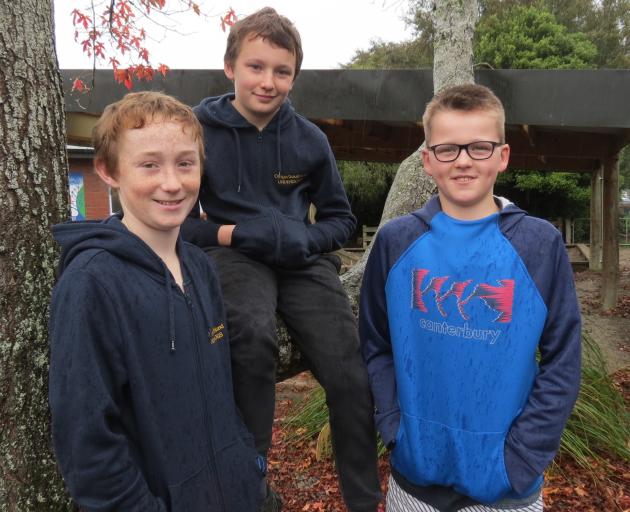 After their adventures at the AgrikidsNZ competition in Napier recently, the Limehills School's Underdogs are back working on the school's glebe or on community projects. From left are Cooper Mitchell (11), Danny McDonald (11) and Ben Cairns (10). Photo: Yvonne O'Hara
Limehills School's Underdogs, Danny McDonald, Cooper Mitchell and Ben Cairns had fun representing the region in the AgrikidsNZ competition in Napier recently.

Ben won the competitor of the year award, after receiving the most nominations from those running the various modules, who thought he showed leadership and sportsmanship.

Ben said they worked as a team.

He said he was shocked when he heard his name announced.

''As they were announcing it, it seemed like a really long wait before they said the name.''

He won a Hunting and Fishing jacket, handwarmers and insect repellent from Ospri, a bean bag and a jersey from New Holland.

Danny said they had a lot of support from the community to raise money to attend the final.

Now they are back at school they are all involved with various community and school projects.

The school's glebe boasts a 228% lambing increase from scanning this season.

They have seven donated sheep, and a couple of chickens.

The school has a large garden and two tunnel houses, and produce is sold.

The school also has a student volunteer army, which helps with community projects and pupils help on-farm or in the garden as well.

They receive support from parents and community to help with mowing, drafting, etc.