Velvet a surprise passion for sparky 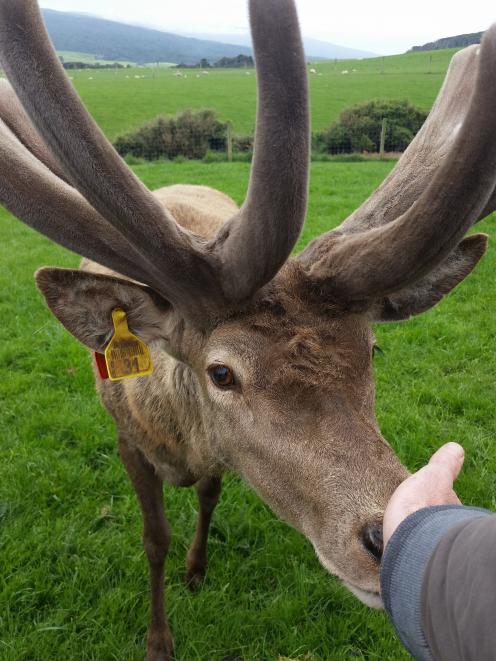 One of the late Beverley Anne Dowling’s stags that provided the founding stock for B.A.D Deer, Nathan and Selena Coburn’s farm at Colac Bay in Southland. PHOTO: SUPPLIED
A combination of good management and great genetics have contributed to a Colac Bay deer farming couple’s success in the production of consistently top-quality velvet. Mary-Jo Tohill reports.

Nathan Coburn never intended being a deer farmer, yet less than a decade on from his first exposure to the antlered beasts he is well and truly hooked on velvet.

In fact, the sparky who owns Riverton Electrical, has become something of a live wire in the Southland deer industry.

About nine years ago, the self-confessed former townie and his wife Selena inherited a mob of English reds from her mother. The Coburns called their farm B.A.D Deer, using her initials, Beverley Anne Dowling.

"I’d not been interested or into it at all. It was really to carry out her legacy. Selena is why we are velveting because they were her mother’s animals," Mr Coburn said.

Initially, the 180 deer were looked after at Taieri, before being moved to Southland. The Coburns split the mob and took half to Colac Bay, where they were able to use a neighbour’s deer shed on the boundary of their new 26ha block, which was converted from a dairy run-off.

They had since built a house on the land and bought another 19.5ha for their 74 hinds, 86 velveters, 30 spikers, 30 weaner hinds, with another 64 fawns on the ground. Sheep were run for weed control.

At the start, it was just something the Coburns did at the weekends. That was until six years ago, when their daughter Rosie was a baby, and they entered their first velvet competition.

"We couldn’t find a babysitter, so we went with the intention of popping in to look at the velvet for 20 minutes, and someone told us we’d won. We couldn’t even stay for the prize giving. It was a huge surprise."

The stag won the Southland competition and was fourth in the open section. This spurred them on, and since then, they had continued to do well in competition with their small number of stags, as they had slowly built up their numbers.

"It’s definitely getting past the hobby stage to a job, with over half my time spent on the farm," Mr Coburn said. 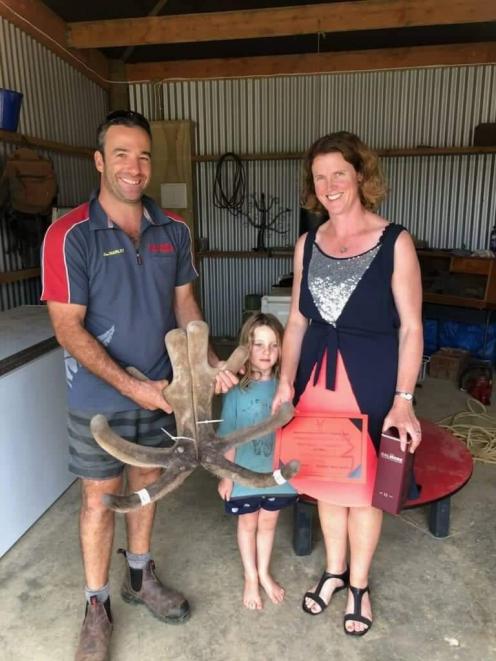 As he had become more involved, he had employed more electricians and a manager to cope with business so he could devote more time to the farm.

Mrs Coburn had continued to work fulltime in the School of Business at the Southern Institute of Technology.

He was fond of their deer and even gave a few of them names.

The couple had gleaned much knowledge from being involved in competition and talking to experienced people in the deer industry.

"As far as our quality of velvet, I would like to think I am OK at farming but we inherited some great genetics. I am also part of a farming advanced party (Southland Next Generation) and this group has helped me immensely. We also have fantastic neighbours who have helped us, along with a childhood mate who is a farmer, who provides me with knowledge when I am lacking," Mr Coburn said.

There are two stages of antler development, velvet antler and hard antler.

Velvet antler is the growing antler which contains blood and nerve supply and has a fully intact skin with a covering of soft fine hair. The annual growth cycle starts in spring and the velvet keeps growing through the summer. Deer velvet is a unique structure, because it is the only organised mammalian tissue that regrows completely.

Hard antler is produced when growth has ceased and calcification has occurred and the skin, nerve and blood supply are no longer functional. The bony cores are all that remain in the rutting season in autumn.

Antlers do not grow out of skull but from the bumps on top of the head called pedicles. They grow as spikes, so a yearling stag is known as a spiker, but sometimes there are multi-spikes.

Trophy animals are stags bred to carry a full hard antler head, for instance on a game farm.

Velvet production is based on beam size (the central stem of antler), thickness, weight and blood component, whereas a trophy head will be evaluated on the number and length of tynes, which branch out of main antler such as brow, bay and tray tynes, and for the spread and style, none of which are critical for velvet.

He would describe himself as a "bit more of greenie" farmer, he said.

"We do try to be as environmentally conscious as we can with no sprays, as little synthetic fertiliser as we can get away with, and no nitrogen application. Any land that can’t handle the deer is usually fenced off and returned to native bush (as we can afford).

"We’re always looking for ways that we can adapt our farming practice to work with nature instead of fighting it. We also all-grass winter so have no crop; as a down side to this we have to feed baleage, which we make in the summer to get us through.

"I don’t farm for venison. I’ve got a hind who is 20 [years old]. There are some stags that are 16 and 17 — that’s quite unusual but it shows their potential longevity. If they’ve got an antler and can produce velvet, they stay."