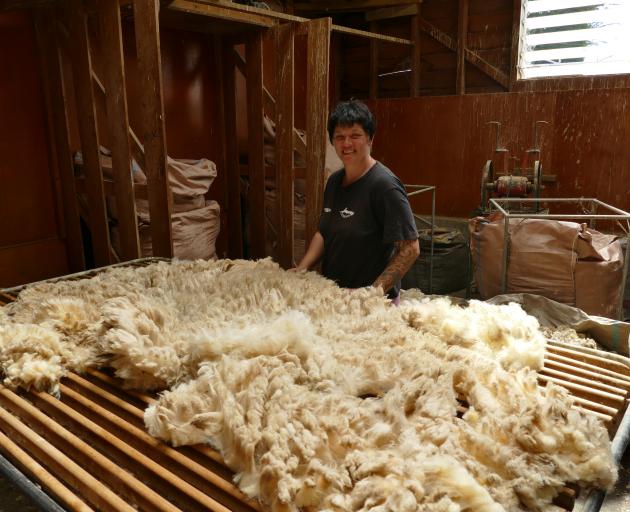 Tina Elers at work on a classing table at a farm in the Caroline Valley. Photo: Ken Muir
For Mataura wool classer Tina Elers, being a wool classer is part of a life-long family journey in the shearing shed.

Father and mother Bill and Gloria Elers have run their shearing business out of Mataura for more than 40 years and Ms Elers began working in the wool-harvesting industry full-time in the sheds at 15, after she left school.

''My father would take me for a ride to the sheds just to do the smokos and lunch in the weekends and holidays when I was still at school,'' Ms Elers said.

''By the third run he would persuade me to do belly and crutch for him and by the end of the day I was doing the board at one end.''

Ms Elers has made steady progress from being a wool handler through to gaining certification as a Q stencil holder, classer, and classer award winner.

Q stencil is the industry's trademark of expertise for certificated wool classers.

''I got my Q stencil qualification and then waited till my kids were old enough not to need my full attention. I then did my papers to become a NZ registered classer about 2012,'' Ms Elers said.

She has worked mainly in Southland and Central Otago, and has been grading and classing since 2012. She has also classed in the Longreach area of Queensland and the Balmoral area in Victoria.

She said she had had a passion for wool and work in the sheds from an early age.

''My goal now is to broaden my knowledge with wool any chance I get,'' she said.

''I find you are always learning something new or a new way to do things in the sheds.''

She said she was also committed to passing her knowledge on to others.

Ms Elders said that while she enjoys life in the woolshed, there are some things that do annoy her, including occasional lapses in the quality of shearing work and people smoking inside the shed.

While the wool industry has been going through some tough times, Ms Elers said there are still a surprising number of shearing teams working throughout the South.

''Mataura alone has five teams based in the town,'' she said.

Mr Elers said because his team had been well established in Southland for so long, they continue to work on the same farms as they change hands.

''We work on a lot of properties where the second generation is now in charge and we're even moving beyond that into third generations,'' he said.

Beyond her wool classing activities, Ms Elers represented the Cook Islands at the Golden Shears World Championships in Invercargill 2017 with her daughter Maiden, making the podium and receiving World Council medals. She was third in both the world individual and team wool handling events.

Ms Elers is a committee member for the Gore Southern Shears after being co-opted by her father, once again .