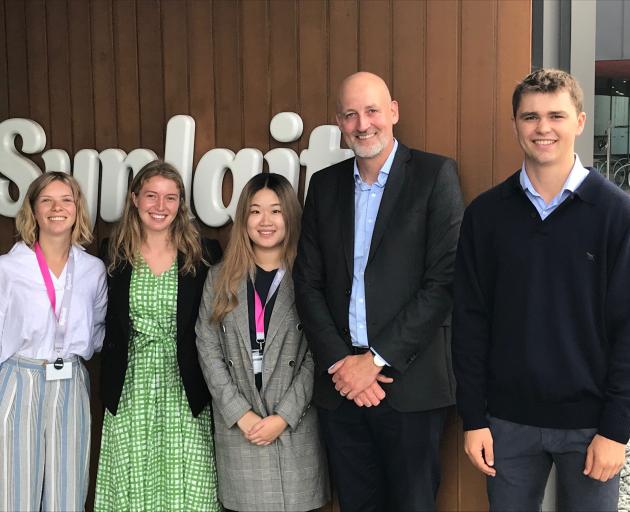 Synlait chief executive officer Leon Clement (second from right) with Future Leaders Programme 2020 intake associates Issy Davies, Giorgia Miller-Thevenard, Claire Ye and Lachie Davidson. Photo: Supplied
Lachie Davidson has travelled to the other side of the world, been crowned a world champion egg thrower and has just embarked on a career with an internationally recognised company which prides itself as being an outside-the-box thinker.

The 22-year-old former Ashburton College head boy is one of four to gain a place in the Synlait Future Leaders Programme. More than 300 people applied.

Under the three-year accelerated development programme, developed by Synlait organisational development manager Tony Aitken, he will undergo leadership training as he learns different facets of the company.

It was a rigorous application process involving application, several interviews, psychometric testing and group assessments including working on tasks under pressure, while under observation, with other applicants.

But Mr Davidson is no stranger to pressure.

In 2019, he and fellow Massey University student Ben McColgan, under the team name New Zealand Yolk Ferns, went to the final of the World Egg Throwing Championships in Lincolnshire, England, and won.

They were up against a Canadian duo and battled it out in 10m increments trying to throw and catch the most of three uncracked eggs in the longest distance. The win came down to a final throw by Mr Davidson, made from the 60m mark, and successfully caught by Mr McColgan.

It was an “eggstatic” victory and when national media came calling, many egg references came, too.

The free trip fitted perfectly with the university break and he got to travel through Europe over a three-week period.

Before global success, Mr Davidson was better known in Mid Canterbury for his role as head boy at Ashburton College back in 2015.

He attributes his career direction as being subliminally planted during his final year at high school, during agriculture study with teacher Stephen Millichamp.

It involved an international view and looked into production systems with a focus on deer, which Mr Millichamp farms.

In 2016, Mr Davidson took a gap year as a Lattitude Global Volunteer, travelling to Ecuador and then Argentina working with special needs children and as an English tutor at a language school, respectively.

It was something he had wanted to do while he was younger and said it helped him mature and gave him a better understanding of being “street smart”.

“Nothing too bad happened,” he says, of the experience.

Midway through the year he applied to university.

While the world was his oyster, he chose Massey University in Palmerston North doing a bachelor of agricommerce – international agriculture.

By the time Synlait launched its annual nationwide recruitment drive in early 2019, he had an even better understanding of his world.

Impressed by the Synlait view of “doing things differently” with environment and sustainability listed among its top priorities, he applied to the programme.

“I was blown away by the environmental side of what the company was doing ... was impressed by their message.”

Among some of the initiatives were the change from coal-fired boilers to gas and electrical options, and the set-up of the 15ha Whakapuawai native tree nursery. It will grow up to one million trees a year which will be given to farm suppliers, and incorporates an annual volunteer planting day for all Synlait employees to get out on farm and help plant trees.

In returning to Canterbury, Mr Davidson has relocated to Christchurch and is living with high school mates, Matthew Rae, Jack Fleming, Logan Coote and Alicia Calles.

His parents, Niki and Rennie, have also moved from rural Mid Canterbury to Little River, at Banks Peninsula, although they have kept a little slice of 24ha, which is being used for cropping, at Greenstreet, just out of Ashburton.

“It’s made the transition easier coming back [to Canterbury],” he said, of living with his mates.

The programme will give him insight into all areas of the Synlait operation, from milk supply to manufacturing, quality to business development and sustainability.

He has started in business development based at the Dunsandel site, but will spend four to six months in each role, working shifts where necessary, alongside others, to learn the process.

“It’s good to have an understanding and be able to relate to people on the floor. It’s a good foundation,” Mr Aitken said.

He is also mentored by a company director to gain insight into senior leadership which is a valuable connection with a visible presence.

And there was a high likelihood of relocation to another of Synlait’s national sites: Auckland, Pokeno, Palmerston North or Temuka but less likely Shanghai in China. It teaches them how to relocate.

Mr Aitken said the programme allowed Synlait to ensure there were future leaders, with the necessary knowledge, to support the company’s purpose of ‘‘doing milk differently for a healthier world’’.

Synlait has about 1100 employees; 800 of them at the Dunsandel plant.

“We recruit for the programme in late February, the year prior, targeting final year students at key universities around the country, which offer degrees [with] the best fit to our business operation,’’ Mr Aitken said.

The three year programme rotates participants, such as Mr Davidson and fellow associates Issy Davies, Giorgia Miller-Thevenard and Claire Ye through a variety of roles while they receive leadership training.

“It’s reassuring the programme we are offering is attracting such talented young people,” Mr Aitken said.