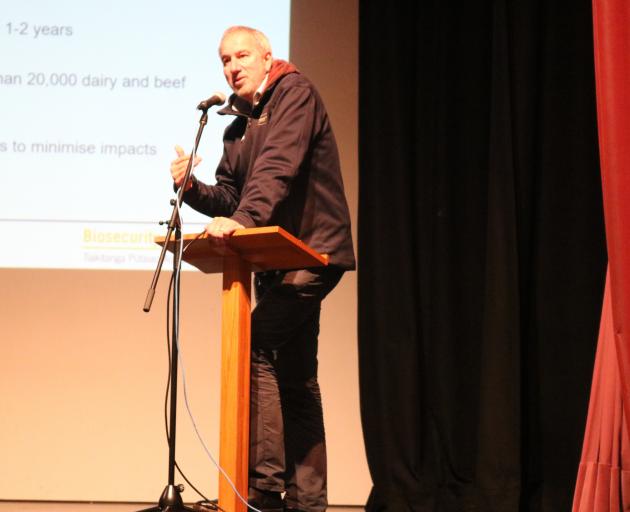 Ministry for Primary Industries director of response David Yard talks about Mycoplasma bovis to a crowd of about 80 in Alexandra yesterday. PHOTO: TOM KITCHIN
Government officials say they are doing all they can to eradicate Mycoplasma bovis but there are still major concerns from farmers in the Central Otago region.

About 80 people attended a meeting held by the Ministry for Primary Industries in Alexandra yesterday.

A woman in the audience said she thought the ministry was "struggling".

"You're telling us to have confidence in who we are dealing with but the tests can't tell us if [M. bovis] is truly positive or negative."

Ministry director of response David Yard said he understood there was "pain" and "frustration".

But he admitted the ministry could not give anyone "absolute assurance" that cattle would be free of the disease.

"We've got probabilities ... but we cannot give guarantees."

Although Central Otago was not hugely affected by the disease, many Central Otago farmers were interested in how M. bovis would affect biosecurity on their farms.

As part of a nationwide tour, the ministry is holding nearly 80 meetings around the country, informing people of its plans to manage the disease and gathering feedback.

Mr Yard said because no country had attempted to eradicate the disease before like New Zealand was planning, the ministry was "learning as we go along".

"We accept that mistakes have been made and we're learning from our mistakes."

The tour continues in Gore today.