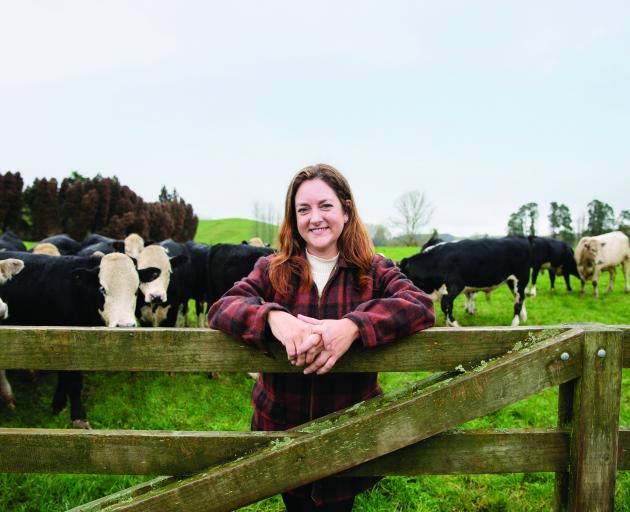 People should make their own choices about what to eat, but need to be fully informed when they do and not rely on marketing, United States nutritionist Diana Rodgers says.

Also an author and the director of film Sacred Cow: The Case for (Better) Meat, Rodgers is in New Zealand to talk to farmers and help the animal industry push back at the messages that eating meat is unhealthy, unsustainable and unethical.

"There is no substitute to real food."

She spoke at the Silver Fern Farms’ Plate to Pasture conference recently and was due to visit Dunedin last week, but weather changed her plans.

The South Island is one of her favourite places after she visited six years ago for a health and nutrition conference in Queenstown.

"I fell in love. I was very sad to have to come home from that."

Since Covid restrictions had lifted, Rodgers, a regenerative agriculture proponent, says her work has been in demand especially as the world focuses on reducing carbon emissions in the livestock sector everywhere.

"It’s really intensified. There is pressure on the meat sector ... it’s really complicated. I usually equate it to a game of Whac-A-Mole."

That meant every time she put up an argument for eating quality animal products she was hit with a counter-argument.

"I might talk about about meat not causing cancer its just association studies, then someone will say it takes up too much land and I have to explain most of agricultural land can’t be cropped, it has to be grazed, its not cattle using up land its utilising uncropable land then they’ll say greenhouse gases or water use, or its wrong to kill beautiful animals, it’s a constant fight."

Rogers believes "as a mother and dietician" eating meat and animal sources of food were really import to humans traditionally.

"It is what made humans human. There is no a good case for eliminating them."

Animal food sources can be raised in ways that are good for the environment and improve ecosystem function, she says.

"Ethically my message on that front is there is no no-death solution to eating, all life requires death. If you want the most ethical food system it should be to raise healthy food in the way that is the least destructive to the environment — grass-fed beef fits perfectly into that."

A major issue is the pressure and messaging young people are hit with, especially in the United States, Europe and in New Zealand, from the well-resourced alternate meat sector, she says.

"People over 40 get that meat is important but young people are really motivated by the carbon reduction idea and the nutrition argument that you can swap it out for alt meat and by doing that save the planet and still get their nutrition," she says.

However, many alternate meat products are nutritionally inferior, ultra-processed and use extractive chemicals that are damaging to the environment and young people do not realise that, she says.

"Meat is a real food, it is unprocessed, it has nutrients that are hard to get or impossible to get from plant proteins."

As there is a lot of profit to be made from the alternate meat sector, cows have become the convenient scapegoat in food arguments, she says.

"I have no problems with whatever people want to eat, it is personal choice, but environmentally, grass fed beef is way better."

Rodgers does not eat alternative meat products and does not believe they are a necessity in the food system.

However, she is concerned that some children are not getting adequate nutrition, with iron and vitamin D deficiency the most commonly found nutrient deficiencies, even in high-income countries, as many children’s diets are made up of more than 50% processed food.

"So I don’t see there is any reason to pull meat away from children."

Rodgers spent years in food marketing before she went back to school after becoming a mother to do a graduate degree in nutrition.

She was diagnosed with coeliac disease when she was 26.

"That drives my passion for nutrition and that children in particular nourishment they need."

She found the curriculum to be "anti-meat" and felt the science did not back it up as she did more research.

It was particularly interesting to her as she was married to a farmer and raising vegetables using animal fertiliser in a "closed loop system" to be as sustainable as possible.

"In order to fertilise vegetables you either use chemicals or animal manure or animal blood and bone. Any truly organic system that is sustainable must have live stock as part of the mix."

As a nutritionist she has a particular interest in malnutrition and often sees people with conditions such as coeliac disease and irritable bowel syndrome, and children with particular nutritional needs.

"I try to help people focus on real food and less-processed food for gut health or to lose weight."

The messaging she was seeing in schools against eating meat jarred with her and drove her to write a book, Sacred Cow, which she describes as a science text, and she then made a film as a more accessible way to get her messages across.

"I wanted to bring people on to farms, to explain regenerative agriculture and why grazing animals are so important for the land, why the land needs them."

She is aware there is a cost to eating meat and her advice is for people to eat the best meat they can afford.

"All meat is healthy it has iron and B12. Grass-fed is better for animal welfare, for the environment and there is some research that it has a slightly better nutritional benefit, but regular meat in America is not toxic."

New Zealanders are very lucky their meat is raised on grass, she says.

"It’s the most perfect system. I can’t believe there is so much pressure to reduce carbon emissions from animals on land when they benefit the environment and sequester carbon."

The methane from cattle is part of a biogenic carbon cycle which sees the methane get broken down, she says.

"After 10 years the methane turns into CO2 and water and gets cycled back again. What they are doing improves the environment, improves the water holding capacity of the land, increases biodiversity above and below ground, can sequester carbon and can feel a whole lot of people."

Rodgers says farmers feel under attack, and her mission it to make them feel better through her social media platform Sustainable Dish.

"I’m trying to point out how to get that message [about sustainable farming] across as it’s very complicated to explain to the consumer."