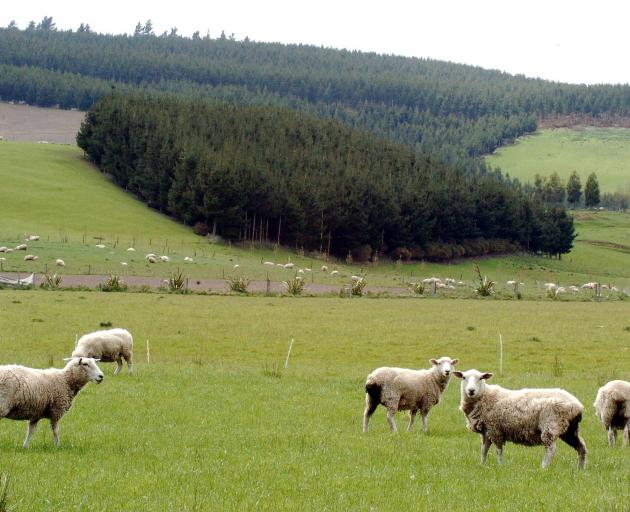 Concerns have been raised about the conversion of sheep and beef farms to forestry. Photo: Gerard O'Brien
Government forestry incentives have seen a 45% increase in forestry farm prices over the past year.

Figures released this week by the Real Estate Institute of New Zealand showed the median price of forestry farms had increased from $6487ha to $9394ha.

That increase might be largely the result of the Government incentives to plant trees, making forestry land more desirable and leading to increased sales of sheep and beef farms.

The impact on prices was greater in the North Island than in the South Island, REINZ said in a statement.

The Government has set a goal of planting one billion trees by 2028. It was ahead of that target, Forestry Minister Shane Jones said last month.

Forestry directly employed 20,000 people and was forecast to contribute $6.8 billion to New Zealand's economy in 2019, an increase of 7% from 2018. Wood products were New Zealand's third-largest export earner behind dairy and meat.

But the focus on forestry - which Mr Jones said would drive regional revitalisation - has been controversial; REINZ chief executive Bindi Norwell said feedback from farmers and rural salesmen around the country was ''increasingly one of concern''.

Many were saying that once beef or sheep farms had been converted to forestry, they would never be converted back again because of the loss of infrastructure and the high barrier to entry, Ms Norwell said.

National organisation 50shadesofgreen has called for the Government to ''stop the blanket planting of good farmland immediately''.

It is requesting a full and independent assessment of the long-term effect of the current government policy.

It also wants the Government to put on hold all Overseas Investment Office applications for new planting until the full assessment has taken place.

The group believes close to 300,000 stock units will be lost this year from the Wairoa, Pongaroa and Wairarapa areas to new farm forestry.

The problem, it says, is that it is not just steep hill country being planted, but productive farmland.

''50shadesofgreen is not opposed to forestry on land appropriate for trees. We are strongly against highly productive farmland being lost to food production forever,'' spokesman Mike Butterick said.

''I don't believe the Government has the faintest clue what its programmes are doing to the provinces. Our view is that they're a wrecking ball hitting food production and rural employment.''

Ms Norwell said prices had risen by 95% in the North Island yet had fallen in the South Island by 4% year-on-year.

The incentives might also be the reason for a reduction in farm sales. The number of farms sold across New Zealand fell 29% from the same time last year. However, the South Island had been affected more than the North Island: the falls were 32% and 26% respectively.

Incentives towards forestry assets were introduced in October last year and changes to the Overseas Investment Act that now prevented foreigners - with the exception of Australians and Singaporeans - from buying existing residential or lifestyle properties meant it might now be easier for foreigners to invest in forestry, REINZ said.