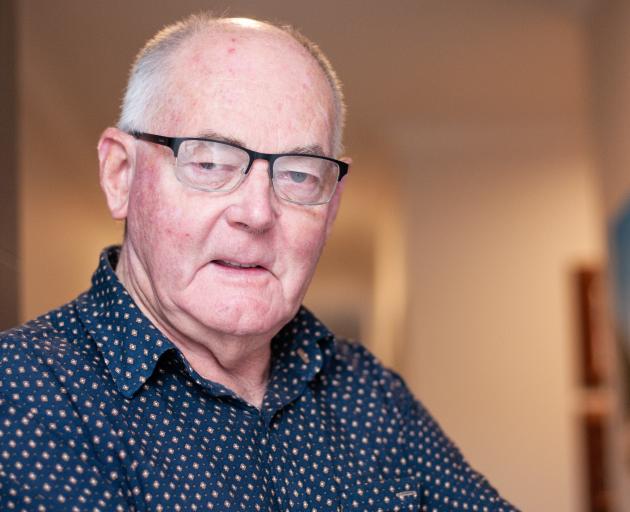 Pisa Moorings Peter Gibson. He and his wife Margaret say they will no longer put up with laser lights from a nearby vineyard shining into their house. PHOTO: SHANNON THOMSON
Central Otago residents angry at bird-scaring lasers from a nearby vineyard lighting up their living rooms like a dance party have complained to the police.

But the manager of the Pisa Moorings vineyard where the laser is used says no-one has talked to him about their concerns and if they do he will fix it.

The Gibsons complained twice to the police between mid-February and the end of last month that beams of light into their lounge were an "invasion of privacy".

They were upset the police "have done absolutely nothing", but a police spokeswoman said they did not deal with laser light complaints.

The Gibsons said the beams had now stopped, but for nearly two months, their lounge had been filled with light, day and night.

"You should not be able to shine them in a built-up area," Mrs Gibson said.

"We are not going to put up with it next year ... They have got no right to shine lights into our house," Mr Gibson said.

Most of Cromwell’s harvest is now over and the two known laser light units in the area are no longer operating.

One, on a cherry orchard, was switched off at the end of February.

The other, on Domaine-Thomson vineyard, was switched off on April 4.

The Gibsons suspected the beam came from Domaine-Thomson near the end of Sugarloaf Dr but were not sure.

Mr Gibson said he complained to the police rather than to the company because he could not find the owner.

He was also concerned the lights could be a hazard to planes and helicopters at night.

Domaine-Thomson vineyard manager Simon Gourley said he was disappointed to discover complaints were on social media rather than receiving them directly.

"We can’t resolve an issue if we are not aware it even exists. We are not hiding. If it was our laser, they can tell us.

"We are signposted from the road, directly opposite Pisa Moorings and there was no contact all. A bit of communication would be ideal," Mr Gourley said.

The new technology had been a "good news story". It did not harm birds, it saved operating costs and he would use it again next season.

"Nets are very expensive to put on and off and maintain while being used. It is also a lot of plastic, a very limited amount can be recycled. If we can avoid those things, it is better for everyone."

Mr Gourley said negative complaints about reverse sensitivity issues affected the entire industry, so it was important for neighbours to talk.

The reality was that living in rural areas was not as romantic as people thought, and growers did not intend to annoy others, Mr Gourley said.

"We have had issues with the gas gun that was supposed to be on a light sensor. I think it was last season. A neighbour rang me up and sent me a message and we fixed it. If someone rings me and says ‘your laser is in my house’ I am not going to say ‘tough s...’. We are going to fix it," Mr Gourley said

Maintrac sales manager Charlie Johnson said if the lighting units were beaming into flight paths or houses at night, they were set up incorrectly.

If installed properly, between dawn and dusk, the most the human eye could see was a quick flash of a green dot around vines or cherry trees.

There was no need to have them going at night, when birds were roosting, he said.

The company supplied hundreds of automated units, mainly in Marlborough, Hawke’s Bay and Central Otago and exported the units to Australia.

They were being used to keep protected red-billed seagulls off Oamaru buildings and in other built up industrial areas without issue, Mr Johnson said.

"Mostly what I am saying, if it is going at night in a vineyard or cherry orchard, it should be a simple fix. Check the timer," he said.

Civil Aviation Authority communications spokesman Mike Richards said there had been just one complaint in New Zealand about a vineyard light unit interfering with an air traffic control tower.

It was rectified as soon as the tower got in touch with the vineyard.