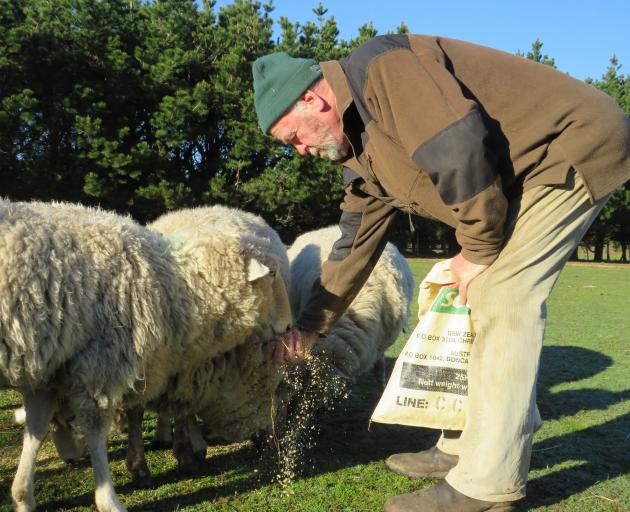 The lambs, mostly singles, were born the week of the Canterbury floods in late-May; just a few hundred metres down the road, the Hinds River broke its banks and flooded areas of the town.

Mr Thomson can hand feed most of his sheepmeat breed flock, including the Texel ram.

He put a lack of twins born this year down to the condition of the sheep at mating.

There was limited feed even then, he said.

The Thomsons lost just one lamb during lambing, and another four when the air temperature dropped just three weeks later.

It was also wet when they were born, but just too cold, he said.

Early season lambs, from Windermere just south of Ashburton, were born the week following the Canterbury flood in late May. PHOTO TONI WILLIAMS
The Thomsons have been on the Windermere property for the past 22 years.

It is a 9ha block, with about 25 sheep bred for lambing in time to suit their dryland property.

Along with their flock they have some cattle and grow lucerne or oats for horse char. Mrs Thomson also has horses.

Mr Thomson, a former school teacher (30 years) turned real estate agent (19 years), can turn his hand at most jobs on farm. He does the shearing from a one and a-half pen shed.

He was proudly “a Highlander by birth” and had a rural upbringing; his late-father Allan was a truck driver but had a flock of around 200 sheep.

Dave learned a thing or two from his dad.

And when the Thomsons moved to Mid Canterbury for Dave’s teaching role at Allenton School in 1975 he took his skills with him.

Every year the lambs are sold through Carrfields at the Temuka saleyards once they weigh 35kg-live weight.

They are raised in time for the pre-Christmas market and make the most of spring grass growth before conditions dry on the property. There is no irrigation and by Christmas, if not November, the site is dry.

This year there had been less growth than usual and the flock feed was supplemented with hay, baleage and crushed barley.