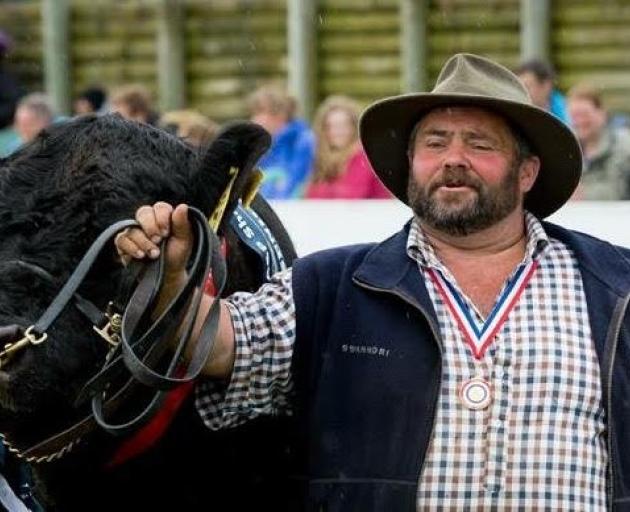 He once worked with Blue Mountain Butchery in Tapanui to sell his Galloway meat at Otago Farmers Market in Dunedin.

Due to a change in his working life, he no longer sells his meat at the market.

A challenge of selling at the market was chasing a constant supply of Galloway meat, to be able to sell it all year round.

Rather than constantly chasing a meat supply, he now sells about 30 Galloway heifers a year to Waimate’s Chopped Butchery.

Chopped Butchery would be successful focusing on the Galloway breed, he said.

"They’ll do very well with it," he said.

He had been breeding belted Galloways for more than 20 years.

In the time, he also started breeding straight Galloways.

An appeal of the breed was its ease of calving and the belt provides an "instant marker" on a newborn calf when crossed with another type of cattle, such as a dairy breed.

"It is easily identified as a beef calf, which is especially good when it comes to the big dairy operations, where you have a lot of staff who can’t tell a beef calf from a dairy calves. These ones have an instant marker of a belt round the middle."

The meat from the breed tasted good and had a "extra depth of flavour" than more popular beef breeds in New Zealand.

"It’s a slower maturing type beast, which adds to its meat quality."

Galloways could be farmed commercially but they took longer to add value as they grew more slowly than other breeds, such as Angus and Hereford.

A lack of Galloway cattle in New Zealand would make it difficult to compete commercially against other beef breeds.

"Much of our hill country is dominated by Angus and Hereford maternal cows."

Most farmers were paid for the weight of the beef cattle they sent to the freezing works, rather than the quality of their meat.

"That’s where the problem is."

The customers wanting the same quality of meat as in a farmers’ freezers would maintain a steady demand for quality beef breeds, such as Galloway.

"Homegrown is always the best."

The niche market would grow as more people bought beef on its quality and would be repeat customers after having better dining experiences.

He doubted Galloway meat would ever supply an export market in New Zealand but it had a place in a domestic market.

If two stews were made, one using Galloway meat and the other using a similar cut of meat from a supermarket, the difference was like "chalk and cheese", he said.

"The Galloway is that much more superior."