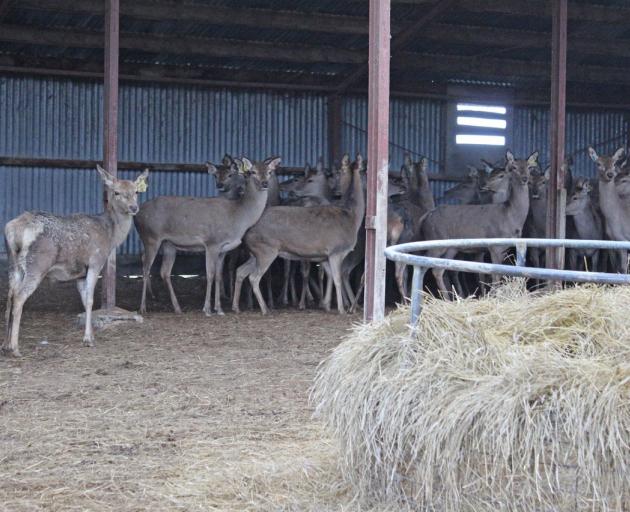 There was renewed interest in wintering deer indoors because of increasing pressure from the Government and regional councils to address winter-cropping issues, deer farmer and chairman of Southland Environment Advance Party John Somerville, of Pine Bush, said.

Mr Somerville’s father converted two existing buildings into deer barns and he had one covered yard with a silage bunker for deer, while Bruce Allan, who farms deer near Gore, has built two new ones.

Mr Somerville can have up to 70 velveting stags per shed.

"My father started it and we have been doing it since the late 1980s."

He has found the operational costs of wintering his stags indoors comparable to winter cropping.

"We are able to control their environment and there is better utilisation of feed as they don’t trample it into the ground and it is easier to feed out."

Woodchips, sawdust or straw is used and remains considerably drier than that used by dairy cows under similar conditions.

One shed has a self-feed area on a feed pad, while the others are fed silage and stock nuts each day.

"If using stock on crop the paddock is out of commission for a whole year apart from the months it is winter-grazed."

Mr Allan has 79ha near Gore and runs 650 deer, including 240 deer indoors during the winter, and feeds from a silage wagon.

He built a new shed with a plastic roof in 2018, and built a second one with a tin roof in 2020 for his velvet stags.

"We put the stags indoors for two months and we also put in the hinds for two to three weeks after they finished the crop.

"It takes away some of the risk associated with grazing on crop, like the mud getting into the waterways.

"It means we have got a paddock available for more feed in spring. That helps in the shoulder season and if the weather turns to custard in May or August.

"Effluent is not an issue as they produce pretty solid dung."

"They maybe require 20% less feed on wet cold days and there is less wastage as they are not standing it it."

"The bigger the shed the cheaper it is per square metre."

Operational costs for wintering indoors compared to wintering on crop were about the same.

"It is a bit too early to say what the production benefits are, except last year the stags’ velvet weight was significantly up during a significantly poorer season.

"They came out of the shed in reasonable condition.

"It is a fair amount of money, no question, but it is a worthwhile option for some people."