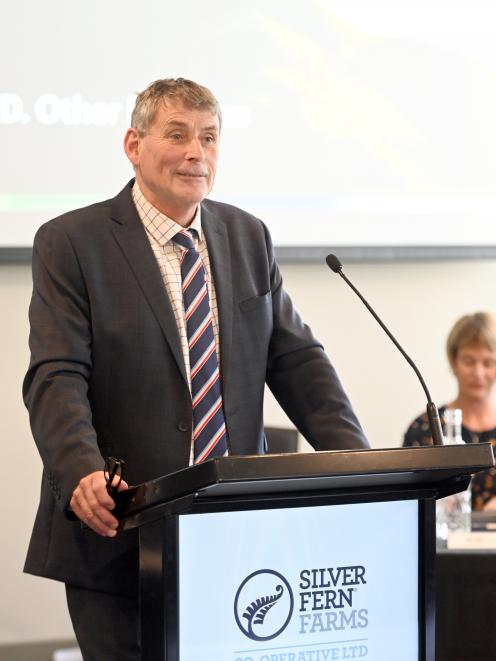 Mr Young made the announcement at the conclusion of the meeting, saying he intended to see out his remaining two-year period as a director.

He was appointed as a farmer director in late 2013, after standing down as chairman of Meat Industry Excellence — a group that was seeking industry reform — to seek election to the board. He was elected chairman of Silver Fern Farms Co-operative — which jointly owns Silver Fern Farms Ltd with Shanghai Maling Aquarius — in 2019.

In farmer director election results announced yesterday, Rob Hewett, the co-chairman of Silver Fern Farms Ltd, was re-elected to the co-operative’s board, along with Gabrielle Thompson, who was previously a board-appointed director.

Speaking after the meeting, Mr Young said with Mr Hewett being re-elected to the board, he felt it was the right time to step aside.

He was delighted to see the depth of candidates coming forward for governance positions and said there were good learning opportunities to be more hands-on in the co-operative. The interest in the last election was encouraging for the future of the co-operative.

A lot had been achieved in the past couple of years and it was in a "really good spot". It was a good time to "bow out" and let the next person take it on for a longer period.

When it came to his successor, Mr Young said there would be a board discussion over the next couple of days.

Reflecting on his past eight years, Mr Young, who operates a 300ha sheep and cropping property at Tapanui with his wife, Keri, said collaboration within the meat industry had improved so much.

"I think everybody is working for better outcomes for the whole industry, that’s really encouraging," he said.

In his address, and reflecting on 2020, Silver Fern Farms chief executive Simon Limmer said it had been a year of uncertainty.

It had meant disconnectedness, the board had not met face-to-face for 18 months, and constant change in a phenomenally dynamic environment.

The financial result was "really satisfying". It had a strong balance sheet and a strong environment to allow the company to continue to execute its strategy.

In 2018, a five-year plan was set and it was very satisfying to be so far ahead of where it had expected to be.

2020 had been a roller-coaster in the markets, with a move away from food service and the growth in retail and e-commerce.

Global supply chains were "doing us hard". There had not been a recovery from the closure of Chinese ports and the disruption today was significant.

When that eventually led to a compromise in processing capability, farmers were left with very little option and, when coupled with drought, that made for a very challenging situation, he said.

Silver Fern Farms had moved "substantially" away from using third party agents. That had been a significant challenge the company was taking a lead on and it had been very successful in the South Island and there was further work to do on in the North Island, he said.

As far as the outlook, Silver Fern Farms was "tracking well". There was very strong demand for its products in markets and there were some positive signs around global economic growth in an environment where there was "a lot of doom and gloom" six months ago.

Overall demand for protein was very strong and Covid-19 vaccines around the world were building momentum. Vaccines needed to be rolled out in New Zealand and priority made for businesses like Silver Fern Farms, he said.

New Zealand’s reputation remained strong, there would continue to be a shift to new channels, and political challenges were going to be tough for politicians to navigate.

There were no immediate solutions to global supply chain challenges but there would have to be innovation and solutions, other than containers, potentially found.

Regenerative farming practices were something that was real in the market and whether people liked the term or not, they had to acknowledge that was "what we have to be doing".

Silver Fern Farms spent $52million in capital investment last year and it had already committed to a much bigger investment this year.

Mr Young said it would work on environmental support for farmers and be a stronger voice on areas of Government policies that had a material impact on the way sustainable food was produced.

He thanked outgoing Co-operative director Fiona Hancox, who decided not to seek re-election, saying she had been a "tireless worker".