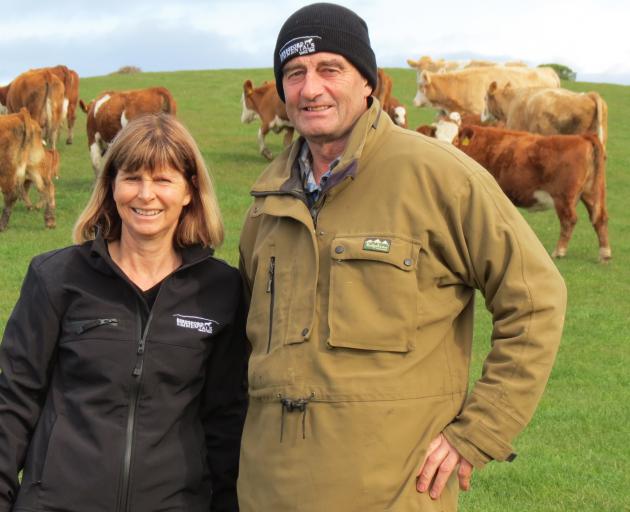 A press release from the Simmental Council said the breed was ''hitting targets for both growth and eating quality quicker than other breeds''.

''We have had Simmentals on the property since the early 1980s after trying several European breeds.

''We found the Simmental growth rates and hybrid vigour superior to any other breeds we tried.''

The couple have three children - Rebecca, Harriet and Cam - and they farm on a steep to hilly 1200ha (with 950ha effective) property in the middle of the Catlins.

Their 200ha of native bush provides warmth and shelter for lambing and calving.

Lambs are drafted at 18kg from Christmas to April, with surplus ewe lambs used as breeders, and their lambing percentage was about 145%.

The ewes are easy care and left to their own devices during the lambing season.

Of the Simmentals, 60 are replacement heifers and 50 are sale bulls, with the top 40% of calves retained and the surplus sold as weaners.

''When we first crossed Simmental bulls with Herefords, they had hybrid vigour and it gave us very good first cross calves for market.

''From our experience, the progeny finish earlier with a high carcass weight.''

The Burgesses held their seventh annual on-farm bull sale in May this year after selling at the combined sales at Owaka for 20-odd years.

''We get a premium for Simmental-cross calves as they are recognised for their growth and carcass attributes.''

Each bull was scanned for traits including eye-muscle area and intramuscular fat, an attribute that is important for taste and eating quality.

Their Simmentals also score well for meat quality and taste.

''We also cull heavily for docility, structure and temperament,'' she said.

''We don't take them through a second winter although some farmers carry them through to heavier weights for specific markets.''

They intend to concentrate on introducing polled genetics in the future.

''At this stage, about a third of our progeny are polled,'' Mr Burgess said.

When not farming, Mr Burgess is a member of the local Lions Club and the Tahatika Collie Club.

Mrs Burgess is a member of the Owaka Combined Sports Bodies Committee, which oversees the rugby, bowling and cricket grounds and is also involved with catering as a fundraiser.

They have one granddaughter, Charlie, who, at 21 months, is a keen farmer, and there is another one arriving shortly in the North Island.