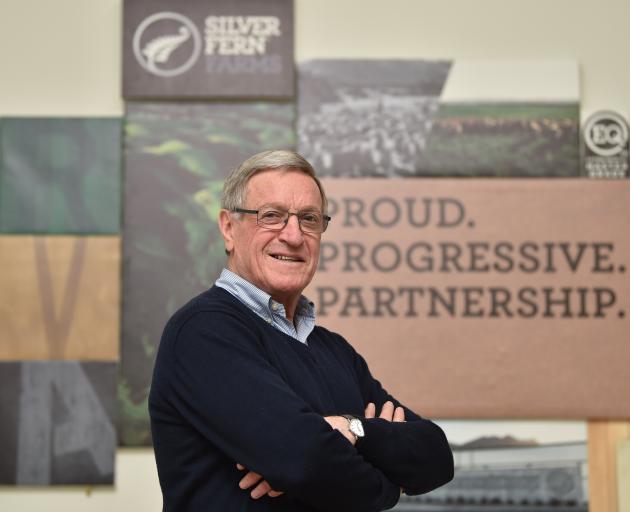 Lyn Jaffray is retiring from Silver Fern Farms after a lengthy tenure with the company. PHOTO: GREGOR RICHARDSON
When Lyn Jaffray walks out the door of Silver Fern Farms’ headquarters in Dunedin tomorrow, it will be the end of an era, as business and rural editor Sally Rae reports.

Lyn Jaffray is preparing to close his last deal with Silver Fern Farms.

When he retires tomorrow, it will mark a 48-year association with the company which has included more than 20 years managing its China market.

The former All Black’s departure follows a discussion about succession and a year-long transition period, and he was happy with the timing of it.

Mr Jaffray acknowledged he would miss China, a country that had consumed a large part of his life since he became Silver Fern Farms’ (then PPCS) first sales representative there, and which is now the company’s biggest market.

Last year, Mr Jaffray was nominated for the unsung hero award in the Otago Export Award; in nominating him, Silver Fern Farms said he played a significant role in driving export sales growth — from $28million of product in 2008 to more than $600million today.

"Lyn’s cross-cultural intelligence is a significant strength. Lyn has an exceptional ability to educate people in a way that builds trusted relationships through the supply chain.

"His belief in the potential of the market stems from his ability to understand customers in China and respond to their cultural needs and their consumer preferences.

"To Lyn it is clear that it is not just the product that needs to be sold, it is the story that accompanies it, and that story must be relayed in a way that resonates with his Chinese customers."

Mr Jaffray had been a "champion" for that market within the business, educating people in the company’s operations, sales and marketing and procurement teams about the diversity of the market and the needs of its customers and consumers.

He was also ever-present at farmer-facing events where he explained the benefit of developing the China market to farmers.

A Green Island boy, Mr Jaffray’s love for the rural sector could be attributed to time spent on farms in the Becks and Cambrian areas of Central Otago during school holidays.

After leaving school, he joined stock and station business Donald Reid and Co for five years as an office boy through to a junior agent. He was then offered a job as a PPCS lamb drafter, servicing East Otago farms.

He loved that time; the timing was fortunate as many young farmers were just taking over their parents’ farms. It was all about work and sport, and he quipped that they would "kick the stones and talk about rugby".

Times had changed since then and the skillset required to service farmers today was totally different; however, the work he had been doing in China was really no different.

"You’ve got to earn respect. Then there’s that trust, loyalty, integrity you’ve got to have," he said.

And that was no different from driving up to a farmer’s driveway to secure their drafts of lambs. And it was a character building industry — the year prior to becoming a drafter, farmers had been paid 20c a head — so it was important to be able to ride through those difficult times.

After five years in East Otago, he moved to Timaru where he had a co-ordinating role and, in 1980, he was asked to relocate to Dunedin and join the sales team.

The transition from drafter to sales was "pretty dramatic" and involved a different skillset. "We’ve all got different skill sets. I just love closing the deals, that’s what I’ve done all my life. That’s what we get out of bed for," he said.

Mr Jaffray felt fortunate to have had such a long association with China, describing himself as "the lucky guy", having managed that transition from "nothing" — "I was the first one to get on a plane to go up there" — to a business that was now doing "sensationally well".

Having previously managed South East Asia and been in the Middle East, he had some global experience, but it was still daunting heading into China.

Due to climatic conditions in northern China, there was a lack of protein which saw it initially buying lamb flaps from New Zealand to use for its popular hotpot. That was where it all started.

Mr Jaffray stressed the importance of the Chinese market. To put it into perspective, people must first acknowledge and respect the influence it had had over New Zealand’s agricultural sector over the past 20 years.

Beef, mutton, lamb, horticulture and dairy had all "benefited enormously" from the increased sales to China on both volume and price, he said.

If farmers wanted to achieve what they needed to, with the increased costs they faced, China was "very, very important" — "without China, you can virtually shut your gate," he said.

Asked how he managed the transition into a very different culture, Mr Jaffray said "just be a Kiwi and be yourself — that ticks a lot of boxes".

Mr Jaffray was proud of what had been achieved at Silver Fern Farms. Having a story, a brand and a point of difference was critical, and the company’s challenge was to continue to grow its brand and recognition.

The timing to leave "couldn’t be better".

He cited the strength of the company: "There’s a feeling out there we’re certainly on the front foot."

Mr Jaffray and his wife Karyn intended to stay in Dunedin at this stage; they also had a property at Wanaka where they enjoyed spending time.

With two sons in Auckland and five grandchildren, they were keen to spend more time with them.

"I’ve got plenty on the plate I think. I’m going to miss it [the job], but I won’t miss parts of it. When you have growth like that, there’s a lot of pressure to deliver."

His involvement with rugby these days was limited to "enjoying watching it". The Green Island Rugby Club’s first All Black, Mr Jaffray — a first or second five-eighth — represented Otago and South Canterbury at provincial level.

Selected to play for the All Blacks in 1972, he subsequently played 23 matches including seven tests from 1975-79.

He visited South Africa and Australia and toured England, Ireland, Scotland and Wales during what was an "unbelievable" time.

"You’re very fortunate, aren’t you, to have the opportunity to represent your country," he said.