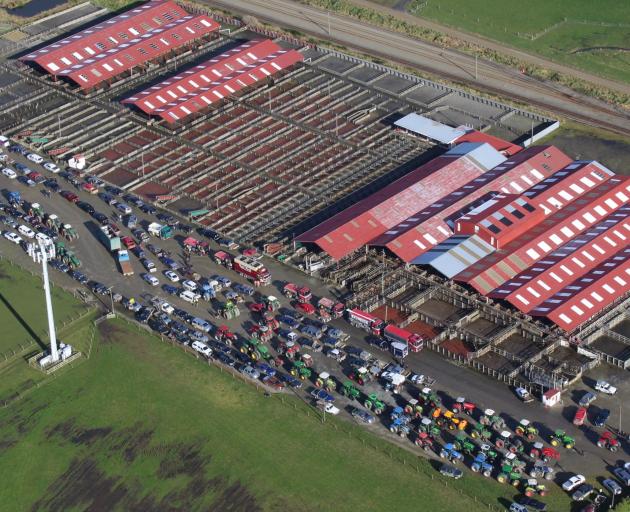 Tractors and utes gather at the Invercargill saleyards. PHOTO: MATTHEW ROSENBERG
Farmer-owned co-operatives have come under fire from the farming community for telling staff they were not allowed to represent their company’s brand at last Friday’s Groundswell New Zealand protest.

Some farmers have indicated shifting their support from co-operatives that took such a stance ahead of the Howl of a Protest, which drew thousands of people from throughout the country.

Clarks Junction farmer Jim Macdonald wrote to Farmlands chairman Rob Hewett before the event saying he was concerned and angered by the decision, and urged a change of heart.

Staff were told if they wanted to support Groundswell the company asked that it was done independently of Farmlands "to protect the Farmlands brand". It is understood some other rural companies made similar requests to staff.

Mr Macdonald said as Farmlands was New Zealand’s largest farmer-owned rural supply company, he would have considered a show of support for those farmer owners would be a priority of the company’s board.

"These companies need to wake up. Without us they are nothing. These directors of these companies are paid large directorship fees by us, the farmer, and it seems to be for nothing.

A farmer makes a statement during the Howl of a Protest event in Gore on Friday. PHOTO: GERARD O’BRIEN

"It will make farmers look for smaller identities to support. Don’t expect farmers now to support any of their own co-ops.

"Isn’t it one of the unique features of co-operatives that they should be operated with a focus on members’ needs?"

Members were hurting both financially and mentally and needed all the support they could get. Farmlands was not an advocacy group or an organisation which needed to "have a foot in each camp" and it should only be acting in the best interests of its members, he said.

When contacted, Mr Hewett said the company had a "high degree of sympathy" with what Groundswell was trying to do. He personally, and the company, had made an effort to build good relationships with various ministers and ministries, stretching back to before Covid-19.

"We think we are able to effect better change by dealing with them through channels we’ve earned the right to operate in."

The company was dealing with some of the same issues raised by Groundswell, "just doing it a different way", Mr Hewett said.

Farmlands had no issue with staff going to Groundswell rallies. It just did not want its brand to be "out there" and that had been made very clear to staff in communications, he said.

When Fonterra was asked if it issued a similar directive to staff, a spokesman said some of its employees were farmers in their own right and were free to support it "in a personal capacity".

"Fonterra is a business that’s built on farms passed down from one generation to the next and we see first hand the hard graft that goes into making farming more sustainable.

"We respect anyone’s right to protest peacefully. Fonterra’s focus continues to be on working collaboratively with others who care about New Zealand’s long-term sustainable future, including primary sector organisations, iwi and the Government."

Another bunch of corporate word-soup.
Farmers own it and they are being told what they can't do?
Talk about being cutoff at the ankles.
Next protest has to be bigger

Isn't it interesting how these very well paid CEO's of farmer co-operatives would rather align themselves with who they consider the ruling elite, rather than the people that pay their salary and expense accounts.
I think an audit needs to be done on the lifestyle of ALL these ELITES to determine the wasted (nonproductive) resources they control and their personal emission levels.
I'm sure that while NZ'ers average house size decreased from from 200m2 in 2010 to the current 156m2, theirs increased.
I'm sure they will be buying a new EV once the upward wealth transfer tax is applied to workers vehicles, that their families enjoyed the school holidays on the ski slopes or boating in the Bay of Islands and their children get the best education and start in life.
Don't get me wrong, apart from the upward wealth transfer tax, I do not begrudge them their success. It's the pungent odor on their breath as they utter words like social justice, climate justice, environmental protection, sustainable practice, with their holier than thou attitudes, that irritates my nostrils. It's as if their bodies are unable to secret faecal matter like the rest of us.

Bay of Islands! And they buy a violin.

Unimpressed with Farmland's lack of support for the farmers. The directors need to remember who pays them.

By that logic the protesting nurses and teachers must have too much time and money ae?

Happy to pay increased costs for food and clothing? Didn't think so...

I think it’s time you grew your own food Grizz.
Hope you’re not living off the taxpayers' dollar or using any of the services meat eaters provide, because that would by just a tad hypocritical, don’t you think.

Do you actually think a business expense is a "tax concession"? Do you know how GST works when you buy something as an intermediate producer and not an ultimate consumer?

Happy for your food and clothing costs to increase are you or are you happy to keep importing goods made in sweatshops overseas.....

So logically, all tax concessions to all businesses should be scrapped. Have you ever run a farm? Have you ever depended on a farm for your income? Do you even know what a farm is? I suspect you have little knowledge of farming (and business) to make such silly suggestions. Presumably you would prefer NZ to have very little in the way of GDP!

Too right, it's not as if they run like any other business that get tax deductable expences. Why do we even have farmers and farms? As everyone knows, milk comes from plastic bottles, meat is from a meat tray, tomatoes come in cans, veges are obviously frozen and eggs are on the shelf at the supermarket. And we ALL know where wool comes from.....there's a guy that spins it and makes socks! How's the aggrogant selfish entitled attitudes of these pesky filthy rich lazy farmers that produce nothing but enviromental damage! Complaining that there is so much red tape and regulation they won't be able to drive utes anymore. Yeah, too right, let's make them turn it all back to native bush so we can charge tens of thousands of tourists for the pleasure of walking all over it. Better still, let's get those wonderful cruise ship thingys back in action and increase visiting numbers. Too right, that'll bring in the 'climate friendly' income this country needs to invest in batteries for our EVs! It's not the townies that do the polluting, they diligently leave their bins out the front and it all goes to a better place. You don't see townies spraying millions of litres of Roundup everywhere! :)

You appear to have been bitten by the green eyed monster...
Who farms/grows your meat?
Who grows your fruit and veg? (If you are a vegetarian and say you don't eat meat so you don't care about others)
Who grows your soy beans etc (if you are vegan)? Which, by the way, takes more water and resources in general per kg yield than growing a kg of beef.
But hey, whatever helps you sleep at night champ

Everyone should simply boycott these business's

New management is what is required.
Sure there is an emissions problem and there is a fear of the future, but this holier than thou attitude needs to be knocked on the head along with all the identity tribalism oozing out of our taxpayer-funded universities.
Humanity has always faced problems and anxiety is an emotion built into us. That doesn’t mean we should turn on one another like a pack of Marxist, group by group, identity by identity, what ever the fashion of the day is.
The attitude stinks.

Farmers - you have lost my support now.
I don't care whether you are shareholders or not - you don't get corporates or businesses associated with a protest.
Especially when SOME of the protest is based on scaremongering conspiracies.

All co op corporates hide in farmers money do what they want and when it goes bad they go oops and straight back to the farmer for more they should be able to stand up by themselves but they don't and forget who created there jobs , and as for the winey townies on here I'm quite happy to export all my produce and let you eat food from any other country with no rules or quality control see how your heavy metal pesticide levels go !!!!!!! I'm sure the supermarket doest care it's all about extracting the most money from your pocket