Prime Minister Jacinda Ardern was in Southland today for the Southern Field Days event and to check in with people affected by recent flooding.

The region was badly hit by torrential rain on February 3, including Waimumu, where the annual event is being held.

Ms Ardern spoke with members of Fed Army and Rural Support Trust and thanked the work of volunteers which she described as “amazing.”

She said it was important to keep in contact with how the recovery is going.

"We just want to make sure that we are staying in touch - there will be fencing loss, debris, there will be probably some days before we'll even know the full extent, and feed loss.

"So it's a matter for us of staying in touch with the Rural Support Trust as they work through that. They've made contact with roughly 700 farmers who are directly affected and I want to make sure that ministers know the full extent - not just in days, but weeks and months." 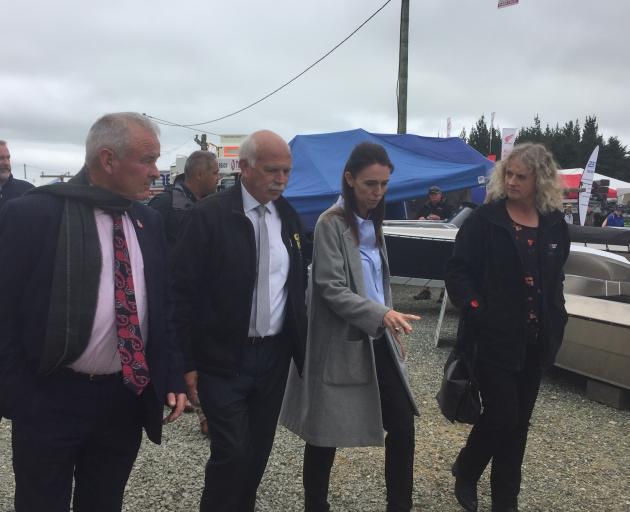 From left: Environment Southland chairman Nicol Horrell, Gore mayor Tracy Hicks, Prime Minister Jacinda Ardern and Invercargill MP Dr Liz Craig at the event in Waimumu this afternoon. Photo: Luisa Girao
The Government has so far contributed $100,000 to the Southland regional Mayoral Relief Fund, which opened on Tuesday to help those affected by the flooding and Ms Ardern did not rule out further help if needed.

"We'll be working with those on the ground to see what other needs might exist and whether or not there is extra support that might need to be provided."

The Invercargill City Council will consider topping up the fund at an extraordinary council meeting next week.

A state of emergency is in place until February 18.

This PM is a joke.
While swanning around flashing cash for iwi at Waitangi, she didn't even make an official statement on the floods.
100k: only to be used for counseling yet spends at least that of taxpayer money on the Waitangi celebration/BBQ/bribefest announcements
The nerve of her to show up afterwards and show a little bit of verbal support, a complete charlatan and a poor excuse for a 'leader for the people'.
Roll on Sept 19!