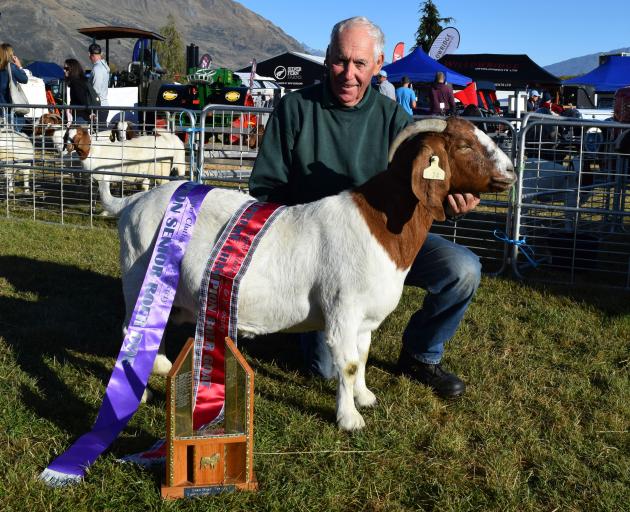 Whitestone Boers owner Owen Booth, of Milton, said his "exceptional doe" beat nearly 50 other Boer goats from across the South Island to win the top prize.

The doe won the same competition — run by the New Zealand Boer Goat Breeder Association — at the show last year.

"She is just so correct and so well put together as an animal."

The "very productive" doe had five sets of kids — four twins and a set of triplets.

A key to his success of producing goats to win the supreme show prize for the past four years was importing Boer goats — 15 does and a buck — from Australia in 2012 and improving herd genetics.

"That’s really put us where we are today."

At the competition he also won three other champion classes — junior buck, junior and senior doe.

He farmed goats mostly as breeding stock rather than for meat, he said.

He had exported goats across the world including to Argentina, Japan, New Caledonia and South Korea.

Boer goats were a meat breed and the global demand for the protein was "huge" but the national herd was too small to maintain a continuous supply to market, he said.

He encouraged farmers in New Zealand to run a herd of goats.

The beauty of goats was their ability to integrate and lift the performance of other livestock.

Goats could enhance pasture on a farm by controlling weeds — eating thistles and mature gorse — while leaving other pasture behind.

"They’re not too fussed on clover so your fattening stock — your cattle and lambs — can follow behind goats and do extremely well."

If every farm ran a herd of goats it would have a range of benefits to the rural sector.

His dream was for each farm to have a herd of goats so there was enough goat meat available to build an industry.

Boer goats originated in South Africa so his herd of 100 goats had to adapt to cold and wet conditions on his 10ha property.

The biggest issue with farming goats was survivability because of their vulnerability to the cold, especially newborn kids.

The only shelter he provided his herd was trees, so they adapted to surviving when living in a commercial environment.

Boer goats had many benefits including being good for the environment as they ate weeds and wilding pines and did not go near waterways, he said.

"They are an all-round animal. they’re intelligent and tremendous to work with."

More positives of farming Boer goats was not needing to shear or dag them and them never getting cast.

The biggest challenge to farming Boer goats was them building a resistance to drench, which required management to combat, such as rotational grazing and integrating the herd with other types of stock.

"Once you understand how to farm them, they are a great animal."