By John Cosgrove
0 Comments
Hundreds gathered at Moneymore, south of Milton, on Saturday to remember a mate and snap up a bargain or two.

The estate of the late John Goldsworthy (Goldie to those who knew him well) was offered for sale and more than 600 people turned out for the auction, which was held on his neighbour Barry Allison's property. 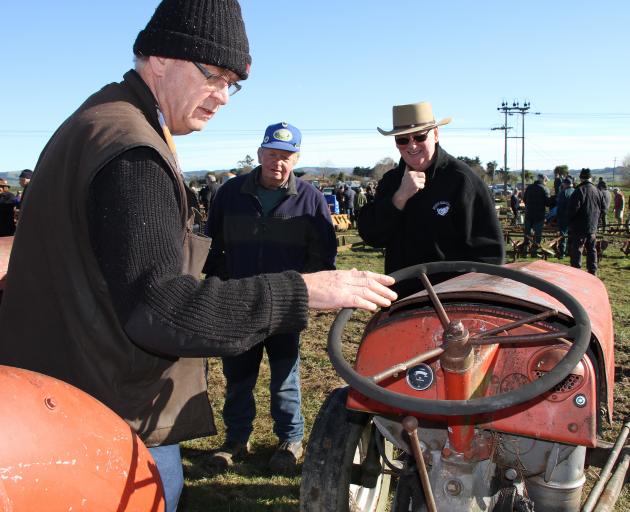 Reminiscing about their days as young men driving tractors on farms are (from left) Rodger Anderson, of Lawrence, Stuart McCraw, of Waitahuna, and Neville Hanley, of Lawrence. The trio had travelled down to attend the Goldsworthy vintage machinery auction at Milton on Saturday. PHOTOS: JOHN COSGROVE

Many came to marvel at Mr Goldsworthy's extensive collection of Massey Ferguson tractors.

Others came with wallets full of cash because they knew Mr Goldsworthy - a well-known aficionado and collector of all things Massey and Ferguson - had amassed an extensive collection of vintage memorabilia.

And then there were those who came along simply to reminisce about days of their youth on the farm driving Massey Fergusons.

Charlie Davis knew Mr Goldsworthy well and recalled his own experiences as a young lad driving Massey Ferguson tractors on the family farm.

"It was great to come along and see all his collection laid out in one place. You never quite knew just how much Goldie had hidden away on his farm and we probably won't ever see a collection like this come up for auction ever again," he said.

Sue Wilkins came along to remember the fun-filled days of her first job, on a farm in Wales - when, although she did not have a driving licence, she was told she had to drive a Massey tractor to earn her keep. 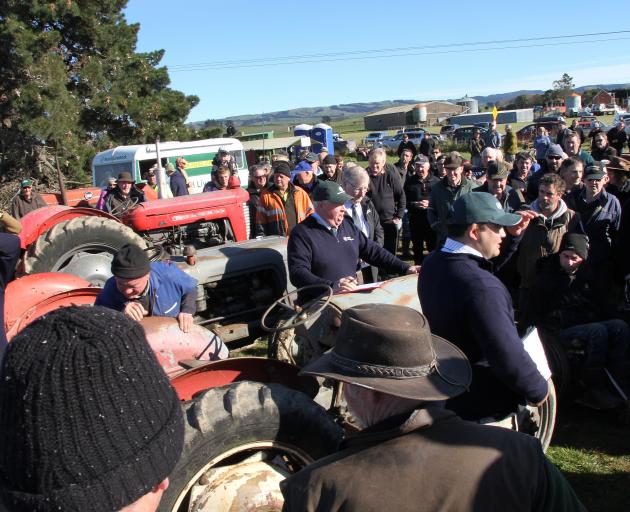 With over 600 buyers eager to hear the bids the Rural Livestock auction team of Rob Fowler, Logan Moore, Terry Cairns and Hamish Lowe had their work cut out for them.
Others, such as Richard Hill of Palmerston, came looking to add to their own collections of vintage machinery.

"It is a great collection and I'm hoping to add some more toys to the six I already have," he said.

A lifetime of collecting by Mr Goldsworthy led to 31 tractors, including Massey Ferguson TEAs, 135s, 168, some Fordson tractors and a Ferguson TEF 4-cylinder diesel, plus hundreds of vintage machinery bits and pieces all going under the hammer.

Auctioneer Rob Fowler of Rural Livestock said he was amazed by the turnout.

"We had serious buyer interest from Tauranga to Bluff, plus Ireland and Korea for the auction.

"In just over two hours we had a 100% clearance of all lots.

"Many of the tractors on sale were sold as restoration projects. You don't often see an auction like this ever coming up as many sales are for fully restored vehicles, but with Mr Goldsworthy's estate, buyers knew they were getting a project to continue," he said.

Mr Fowler said most of the 31 tractors on offer went for $200-$500 and all 252 pallet lots of tools, implements and collectables were quickly sold.