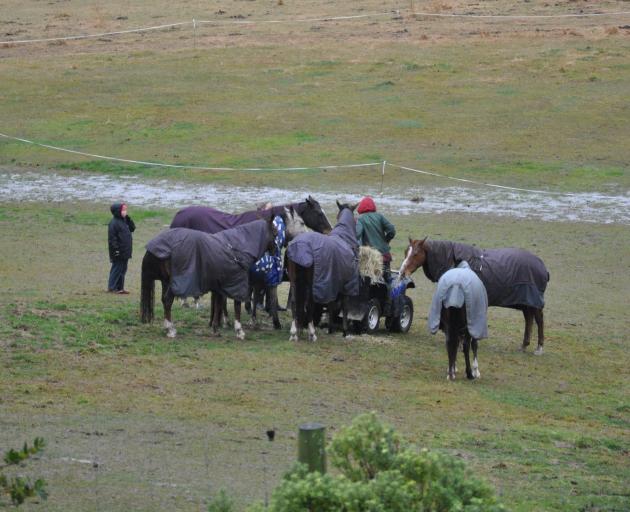 Horses in Ashley get their morning hay ration, in a scene that played out across the region on Sunday, May 30. PHOTO: SUPPLIED
When the Lumsden family looked out the window late on Saturday, May 29 and saw the Ashley River coming towards their Okuku home, they grabbed their four cats and five dogs, threw them in their car, and drove to the neighbours.

"Within minutes, the river was a raging torrent.

"We were lucky to get out," Joanne Lumsden said.

Neighbours then banded together, wading through waist-deep water in the dark, to guide the family’s 11 panicking horses to safety, along with the family’s four cows and 15 sheep.

The Lumsden family, with their cats and dogs, spent the night with the Gyde family down the road. 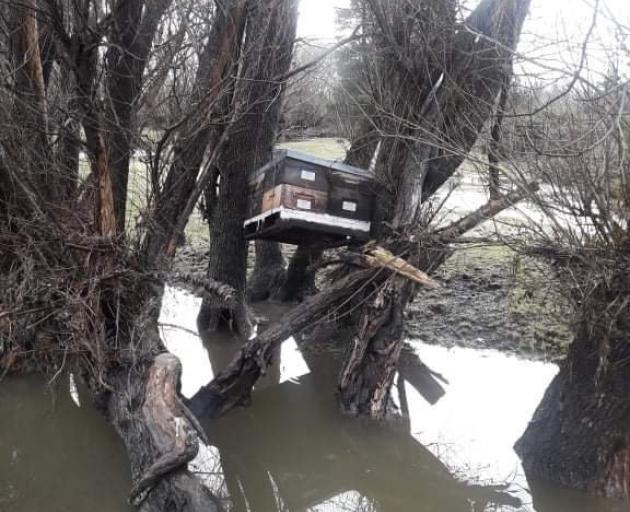 Part of a beehive lies wedged in a tree in Okuku, after being washed over deer fences by flood waters. PHOTO: SUPPLIED
They were relieved the following day to find their home had been spared, with water lapping the bottom of the deck.

But the power of the water left a telling mark when they found part of one of their beehives up a tree, having been swept over deer fencing.

A couple of hives ended up in a lake created by the river, but the remainder had vanished.

Logs, flattened fences and debris litter properties on the south side of the road, and beyond to Bullock Creek.

Six people trying to rescue alpacas, which were threatened by the flooded river near its confluence with the Okuku River on the Sunday, were helped to safety by emergency services, including the Westpac Rescue helicopter, after they became trapped by floodwaters. 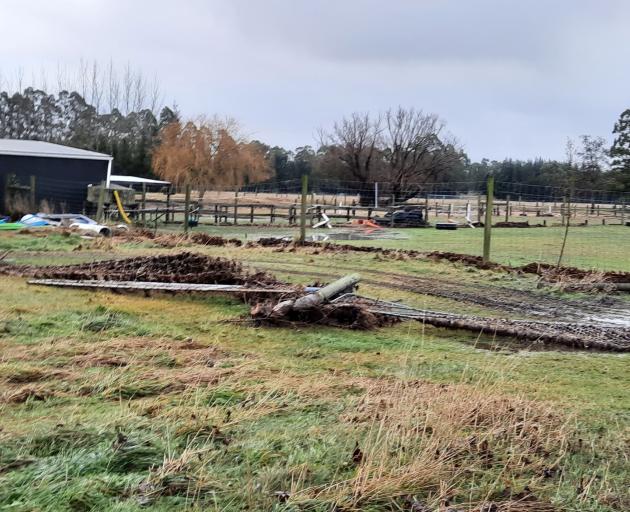 Damage to an Okuku property. PHOTO: SUPPLIED
The 34 alpacas were choppered out in slings by a local operator the next day.

Earlier on Sunday, the rescue helicopter had been called to look for a man swept down the Okuku River in his four-wheel drive.

He managed to get out and cling to his vehicle for a time, before being swept away, suffering a harrowing time being tossed about in the river.

He clambered out of the river through willows and blackberry to a paddock more than a kilometre downstream, where he was found, battered, bruised and hypothermic.

The man was flown to hospital in a serious condition, but was discharged later that night.