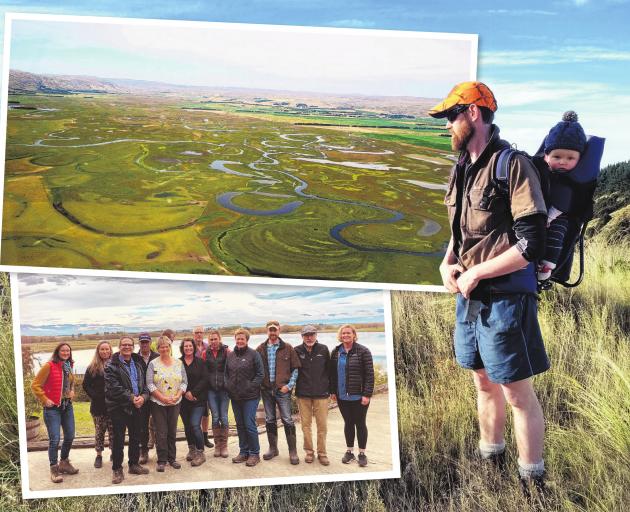 Tiaki Maniototo project manager Morgan Trotter, pictured with his young son Digby, is looking forward to kicking off field projects; also pictured, the scroll plain near Paerau, and representatives of local iwi, the Department of Conservation, Otago Fish & Game, New Zealand Walking Access Commission and Tiaki Maniototo during a meeting at the Sangster family’s property at Ranfurly. PHOTO: SUPPLIED
The green light has been pushed on the Tiaki Maniototo — Protection Maniototo project which will receive $4.55 million funding from the Freshwater Improvement Fund over the next five years, as part of the Jobs for Nature programme. Rural editor Sally Rae talks to project manager Morgan Trotter about what the project entails.

When he reflects on his rural upbringing, Morgan Trotter acknowledges it was a privileged childhood.

Trotters Gorge, near Moeraki, was named after his family and he could often be found playing in Trotters Creek, fishing and eeling, or chasing ducks.

The area comprised lots of farming and fishing families and the vibrant community centred on the local primary school at Moeraki. But the advent of drought, Rogernomics and changes in Government regulations in the 1980s caused a lot of small businesses to fall over, and the school to close.

For an area which was "like a big family", it had a big impact on the community and that was one reason why he was passionate about helping rural communities with regulatory changes coming through now .

"It’s important looking after the vibrancy of rural communities. I know what a great experience it is," Mr Trotter said.

He developed an interest in ecology and he has spent the past 20 years in freshwater environmental management in Otago. After 17 years at Otago Fish & Game, he left the organisation in April to join the Tiaki Maniototo — Protection Maniototo project, as its fulltime project manager.

He saw it as an opportunity to help with the development of a community-led catchment management approach which he believed was the way forward for improving water outcomes.

That project could now begin following the signing of a deed of funding between Upper Taieri Wai and the Ministry for the Environment.

The Freshwater Improvement Fund was part of the Jobs for Nature programme focused on benefiting the environment, people and the regions. Tiaki Maniototo would receive $4.55 million over the next five years towards the $6 million project.

The funding would provide jobs for riparian fencing, native plantings and weed control across the Upper Taieri Scroll Plain wetlands and tributaries of the wider catchment.

It would also see the development of a catchment-wide management plan, the protection of native fish habitats, and enhancement of recreational areas.

Mr Trotter had practical farming knowledge and could understand why farmers were concerned about coming regulatory changes and the uncertainty they presented.

He saw the project as a great opportunity to "bring everyone together and work collaboratively".

Rather than a "top-down regulatory approach", he believe the key was getting everyone involved and working from the ground up.

Upper Taieri Wai was a multistakeholder group whose goals were to enhance environmental and community values throughout the Upper Taieri catchment.

The group was a collaboration between landowners/farmers, interested members of the public and stakeholders. It was a continuation of the Upper Taieri Water Resource Management, New Zealand’s first large-scale integrated catchment management project.

That was developed by Puketoi farmer Geoff Crutchley, who was "well ahead of his time" in terms of promotion of community-led management of freshwater resources, Mr Trotter said.

An application to the Ministry of Business, Innovation and Employment for the Provincial Growth Fund, submitted by Mr Crutchley, Matt Hickey and Mr Trotter in July last year, was unsuccessful.

However, it provided a good template to apply for the Freshwater Improvement Fund and Mr Trotter and Mr Crutchley’s daughter Emma, who has also been heavily involved in water management in the Maniototo, started working on the application in the evenings.

Ms Crutchley is a director of Puketoi Farming with her family on their 2900ha sheep, beef and cropping farm and she is actively involved in farm operations, alongside raising two young children with her husband Kyle Hagen.

The application process was very thorough; the main document was about 70 pages and lots of revisions and editing were required, which was understandable, given the amount of money involved, he said.

It was submitted in November last year and, following an initial approval letter, there was a very thorough due diligence process and revision.

The amount of volunteer time and effort members of the farming community had put into the project was the reason the group had got to this stage, he said.

The project’s administration officer Janine Smith was "really much more than that" and had been a great support.

"Without the ongoing support and commitment from people such as Jo, this catchment group would have folded some time ago and we wouldn’t be in a position to start the Tiaki project now," he said.

Leaving Fish & Game was a big step, particularly as the project did not have approval at that stage, but he was encouraged by his wife Helen, who knew he was passionate about community-led management of freshwater resources.

He was also becoming increasingly concerned about the amount of money and stakeholder relationships being lost on freshwater litigation and court processes.

"We see the Tiaki project as an opportunity to demonstrate the benefits of collaboration and community-led holistic management approaches, as opposed to top-down regulation and litigation.

"I feel it’s a great opportunity for me, if not a privilege to be involved in something I’m really passionate about. This gives us an opportunity to demonstrate another way forward," he said.

Mr Trotter was pleased to see the proliferation of catchment groups throughout Otago. There were now 22 and he hoped local and central government would continue to support and encourage those efforts.

Being able to start Tiaki Maniototo field projects now was exciting, although Mr Trotter acknowledged there was a lot to do.

The backbone of the project was development of a catchment management plan. That would be developed over the next five years but it was hoped it would will be enduring.

There were regionally significant wetland areas scattered across the Upper Taieri scroll plain and the group needed to work closely with the Otago Regional Council to ensure there were achievable workable outcomes with the redelineation process so boundaries made sense. Once that was done, then fencing off sensitive wetland areas could begin.

The Upper Taieri contained the only example of a large scroll plain wetland in the country and presented a dramatic image, especially when viewed from the air.

It was one of the 10 most important waterfowl wetlands in New Zealand and performed an important hydrological function in terms of ameliorating downstream flood peaks and low-flow events, the group said.

One of the first jobs for the project was a large goose cull, which was planned as the geese could affect water quality when numbers built up and they could also affect grazing, Mr Trotter said.

He was particularly excited about a pilot planting programme on dairy partnership land near Patearoa. With its extreme climate, Maniototo was quite a challenging environment in which to get native plants to grow.

The group had some expert advice from the University of Otago on a species list and planting methods which it was going to trial. It had a very ambitious goal of planting 90,000 plants and fencing 200km over the five years.

It was also working with the Walking Access Commission on improving some public access. Maniototo was also home to rare galaxid populations and it wanted to work closely with the Department of Conservation and ORC to identify areas for habitat enhancement.

It also wanted to work closely with ORC to develop an environmental monitoring programme looking at water quality and instream habitat.

The area was highly valued by Ngai Tahu for cultural and spiritual beliefs, values and uses, including mahinga kai and waahi taoa.

Department of Conservation river restoration ranger Christopher Kavazos had been working alongside mana whenua towards the development of a restoration plan for the catchment.

Mr Trotter said a lot of farmers were working hard to improve environmental practices and many had fenced off streams and wetland areas. It was fortunate the group was in a position to help them increase their efforts.

Ms Crutchley said there had been "amazing" support from businesses, especially those that had done work for the group which was not able to pay them for three or four months until its money came through, which was both humbling and embarrassing.

"But I think it is a testament to the project that people could see how amazing it could be," she said.

It was important to communicate back to policy makers why so many of the national and regional policies were unworkable and would not achieve the desired outcomes.

"Over the past few years, we have written submission after submission and also spoken in court.

"But it is so easy to have focus pulled in that direction of what we can’t do and lose sight of what we can do and where the opportunities lie to create resilience and future proof our communities.

"This project has set bold objectives designed with a focus on keeping them specific but open enough to leave a space for everyone to be involved and take ownership.

"We probably haven’t got it all right but that is something that we will work through as things come up.

"We are hoping that, while this is a five-year project, we envisage it becoming much longer-term."