Otago Federated Farmers president Mark Patterson has described the past 12 months as "one of the most tumultuous in recent farming history". 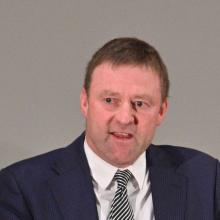 Mark Patterson.
In his report to the province’s annual meeting in Lawrence yesterday, Mr Patterson said agriculture had not faced such a challenging set of circumstances since the Rogernomics era reforms in the 1980s.

On top of that, Otago had been "book-ended" by back-to-back autumn droughts which had resulted in a medium-scale adverse event being declared in large swathes of the region, adding extra stress.

Fortunately, strong demand for dairy and red meat products had resulted in record product pricing at the farm gate.

Tempering that was the re-emergence of significant inflation which threatened to "to take the cream off" what should be a rewarding financial year, he said.

As well as industry levy bodies becoming more involved in direct advocacy, there had been the emergence of the Groundswell movement.

"The mobilisation of large nationwide tractor rallies and a formidable social media presence have done an exceptional job of raising rural concerns into the mainstream.

"Unfortunately, in recent times this has tended to take the shape of trying to divide farming leadership at a time when finding solutions to ill-designed legislation requires a unity of purpose and a willingness to engage face-to-face with the actual decision makers," he said

Pleasingly there had been significant wins on winter grazing regulations with an end to arbitrary resowing dates, impractical pugging metrics and clarification around the status of underground drainage.

The remaining fish-hook remained the ability to sow winter crops on slopes of more than 10 degrees and the need for either a freshwater farm plan or resource consent.

How onerous or restrictive those measures would be was unknown and a key area of focus.

The tripling of the carbon price under the Emissions Trading Scheme had led to fierce debate about the scale of potential afforestation and its effects on rural communities and export earnings.

The effects in Otago could be significant as Otago hill country was seen as increasingly suitable and attractive to investors.

It had been a difficult policy for area for Federated Farmers given its default position around protecting individual property rights.