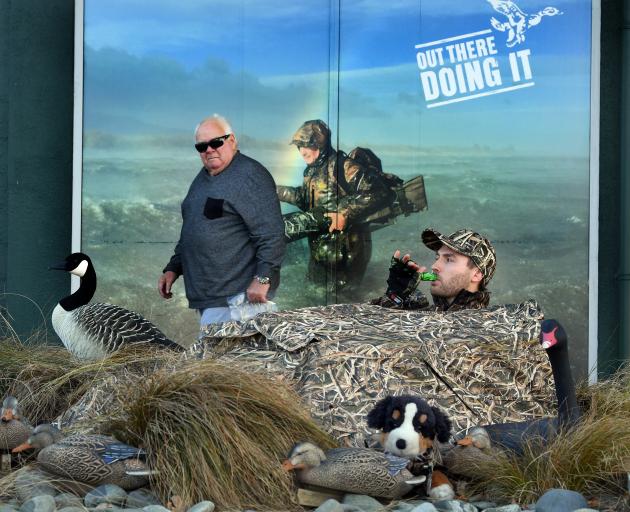 Leaving the Dunedin Hunting and Fishing store, Ian Reeves is intrigued to find Mason Court trying out a single-person mai mai. PHOTO: STEPHEN JAQUIERY
It will be game on for duck-shooting next weekend.

Hunters across the South breathed a "sigh of relief" over the decision to begin a delayed 2020 bird game season on May 23, following the move into Level 2 on Thursday.

The Level 2 announcement meant access to hunting grounds and mai mais by air, road or boat travel would be allowed.

Staying overnight would also be allowed as long as people "play it safe".

"Playing it safe means hunters will still need to maintain social distancing from people they do not know but can share a mai mai with family and friends."

Mr Pacey said duck-shooters would also need to record contact details of everyone they hunt with for contact tracing.

Reports from farmers to Fish & Game had pointed to high numbers of birds across the region.

"With the delay to the season, birds are likely to be well-fed and in great condition," he said.

"It will be licences, ammunition, decoys, firearms and clothing.

"It is one of our busiest time of the year."

He said Hunting and Fishing had extra staff on board and had mapped out the shop to adhere to Level 2 regulations, so was ready when it opened its doors on Thursday.

Southland Fish & Game general manager Zane Moss said it had been "very excited" to hear the news and the 6000 people who took part in duck-shooting in Southland alone would feel the same.

"It is shaping up to be one of the most memorable seasons yet."

He said it would be a good way for people to reset and catch up with family and friends, following the sacrifices they had made during lockdown.

BOOM!!
man shows once again his might
as another frightened bird
crumples up in flight
and plummets
head first
to the ground
impacting
with the sound
of breaking bones
and ripping flesh
and lying there
a last view
through the grass
of the sky
the dog sees the life
leave his eye
and picks him up
just as he dies.