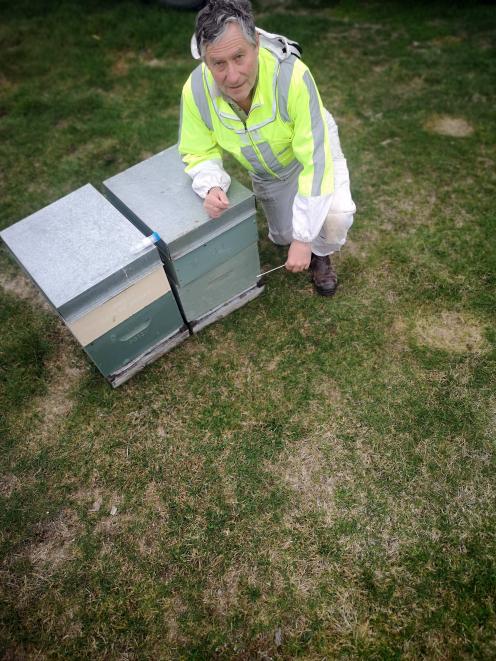 New Zealand Alpine Honey owner Peter Ward, of Hawea, swabs the entrance of a hive to check for American Foulbrood disease. PHOTO: SUPPLIED
A new technology helping fight against a bee-killing disease is a "massive breakthrough", an Otago apiarist says.

The operation was one of the biggest in the South Island.

He had been beekeeping for nearly 45 years and the highly contagious American Foulbrood disease was a "constant concern".

Although the Government approved a strategy to eliminate the disease more than 20 years ago, there had been "no real gain" in stopping its spread.

Healthy bees could steal honey from an infected hive and spread the disease.

"The potential for it to spread is very high."

Every beekeeper, including hobbyists, needed to be "vigilant" and check their hives often, to try to stop the disease spreading.

A new method of detecting the disease by swabbing the entrance of a hive and sending swabs to a lab was providing "definitive results".

Swabbing a hive entrance was much quicker and easier than the most common method of checking for the disease by opening the hive for a visual inspection.

He described looking for signs of the disease as a "hearse at the bottom of the cliff" scenario.

Once the disease could be seen, the infection had reached a stage where the hive had to be destroyed.

The swabs could detect the disease before it reached a clinical level and infected hives could be managed to stop the disease spreading.

He believed the technology would be the primary tool for eliminating the disease in New Zealand.

Helping to develop a tool — the first of it kind in the world — was "hugely satisfying".

"It’s been fun developing some new science which you can see will potentially make a difference in New Zealand and internationally — it’s a game-changer."