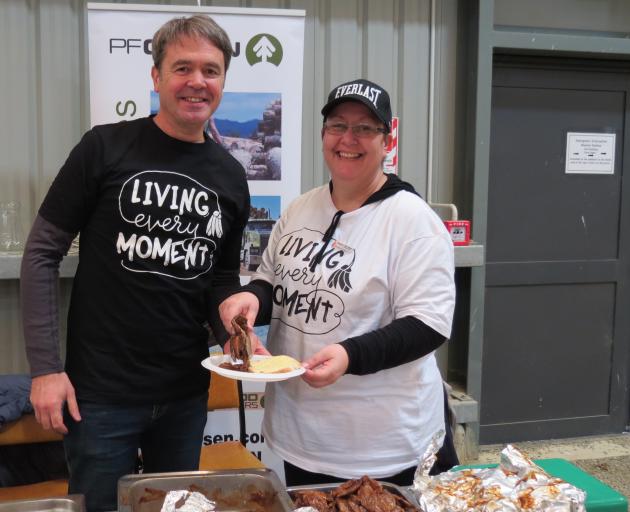 Hospice Southland will benefit from money raised from the event, although the final amount will not be known for another week or two.

Mr Leys said after the success of the Calves for Hospice donation programme, which started in 2017, Hospice Southland had a soft launch of the Lambs for Hospice programme at the dog trials.

''In 2017 we were approached by Jenny Holmes, of Winton's Farm Source store, who wanted to do something for the hospice.

''We worked together to set up the calf scheme, with Jenny, and Katrina Thomas, of Dairy Women's Network,'' he said.

They were supported by businesses, who donated prizes, as well as six trucking firms, who provided free pickup and cartage, and Peter Walsh and Associates, who auctioned the calves at Lorneville.

''Last year we wanted to do it again for a second season, but it was not going to work because of the uncertainty around Mycoplasma bovis.

''This year we worked with Ministry for Primary Industries, which thought it was a low-risk activity and were happy for us to carry on.

''Nearly all the farmers who supported us last time came back on board, plus a few more.''

One hundred and fifty animals had been donated, and the hospice-tagged calves are to be collected in early December after weaning, by the trucking firms, who are giving their services for free. Thesale will be on December 10.

''It was a wonderful fundraiser for us, both in terms of the money raised and the close connection with the rural community, because of the work the team does,'' Mr Leys said.

Farmers could still register for this year's scheme, if they wanted to support the hospice, at https://www.hospicesouthland.org.nz/pages/calf-rearing-scheme/

Both dairy and sheep farmers can also make monetary donations.

The Lambs for Hospice programme was launched at the dog trials, and sheep farmers who wanted to support it could register on lambs@hospicesouthland.org.nz, and donate the value of one or more lambs.

The programme is supported by Farmlands, and HS has approached Alliance and Blue Skies and Prime Range meat processors, who will credit the value of the number of lambs indicated to HS' account, the next time the farmers send stock to the works.

''We are hoping to get other processors on board.''

''Added up it makes a significant difference to our ability to get out right across the rural community to help people in need, allowing them to stay in their homes for as long as possible.''

He said one of their biggest costs was replacing the cars used by the nursing teams.

They have a fleet of six which needed to be replaced every couple of years.

''For a large rural community like Southland, a car is an essential piece of equipment to make sure we can go where needed.''