The Manuherikia: Twists and turns in river’s history 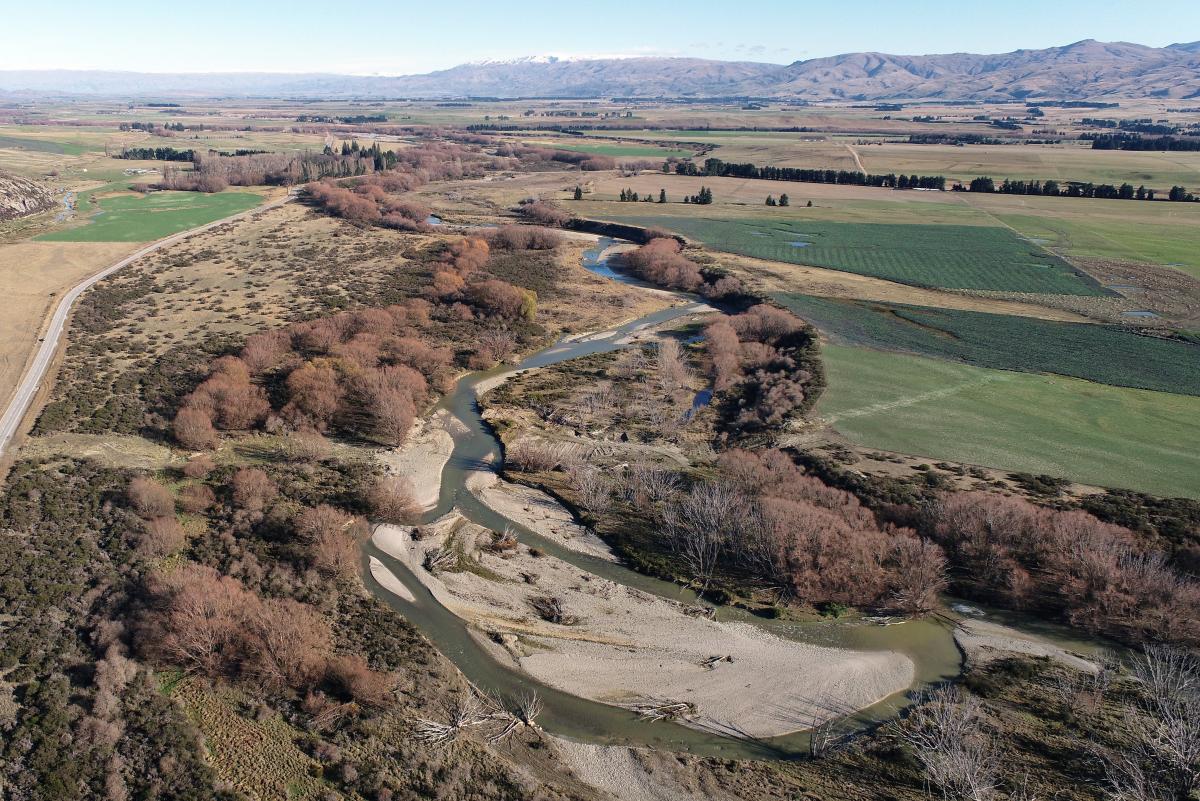 A complex web of water rights and interest groups means the Manuherikia catchment is one of the most complicated catchments supporting irrigation in Otago and possibly New Zealand. PHOTO: STEPHEN JAQUIERY
The Manuherikia River will today again be under the microscope as public workshop is held at the Otago Regional Council’s headquarters in Dunedin to look at minimum flows for the river. The history of the Manuherikia has always been one of give . . .and take. Jared Morgan reports.

Setting minimum flows for the Manuherikia River marks the latest episode in a long-running saga and it is a storyline that will play out for some time.

Today’s workshop called "Manuherekia Issues" is the culmination of months of discussion surrounding management scenarios for the river.

The basis of the workshop is expected to be a summary report following consultation on five flow scenarios for the river.

The consultation will inform the provisions that are part of the development of the Otago Regional Council’s new land and water regional plan to be finalised by 2024.

The scenarios for consultation were developed with input from the Manuherekia Reference Group.

A full report from regional council staff based on the 1089 public submissions made on the proposals will be presented to councillors on August 25.

That report will include a summary of the submissions, a preferred flow from iwi, a report from the Manuherikia Reference Group and a staff recommendation.

It does not end there.

The council’s decision on a management scenario for the Manuherikia River will be made when it notifies the land and water regional plan at the end of 2023, at which point the public will be able to have their say through submissions and hearings.

The history of the river is colourful.

A report prepared by McKeague Consultancy for the Manuherikia Catchment Group offers a potted history of the river.

The first rights to take water from the Manuherikia were issued in the late 1860s for goldmining.

The rush became a trickle and it became uneconomic, meaning many of those rights and the associated infrastructure were used for irrigation as agriculture and horticulture filled the breach left by the miners.

Early irrigation came in the form of private ventures in the Fruitlands and Earnscleugh areas.

About the early 1900s, settlers in the Alexandra and Manuherikia areas lobbied the Government to help with investment in larger schemes.

In response, the Government, reluctantly, purchased the assets of the Bonanza Mining Company after it went into receivership in 1906.

The assets of the company included the Greenland Dam in the Upper Manorburn catchment and a network of water races that carried water to the south end of the Ida Valley and into the Dip Creek catchment at Galloway, where the first area to be irrigated was on Galloway Station.

The infrastructure was later used to develop the first large irrigation scheme in Central Otago in the southern area of the Ida Valley.

The Ida Valley Scheme was extended further with the construction of the Upper Manorburn Dam in 1914 and the Poolburn Dam in 1931.

The flurry of activity was the result of public works, a government response to unemployment and resettlement — firstly, the return of troops from World War 1, secondly the Great Depression.

The third scenario was a repeat of the first — creating employment for soldiers returning from World War 2.

The outcome would transform the catchment.

Built in 1935, Falls Dam has been used to supplement water supply to the four schemes which take water from the Manuherikia River. PHOTO: STEPHEN JAQUIERY
Public works

The Idaburn Dam was also constructed in 1931 in conjunction with the Hawkdun-Idaburn Scheme and supplied water to the northern end of the Ida Valley.

The Galloway Scheme was developed in 1934 with the construction of the Lower Manorburn Dam to irrigate the lower half of the Galloway Flat. The upper half of the flat was irrigated from the Ida Valley Scheme via the Dip Creek water races network until the 1950s.

In response to increased demand in the Ida Valley, in 1954 the Government installed pumps in the Manuherikia River to supply the Galloway Scheme and leave more water available from the Upper Manorburn for the Ida Valley Scheme.

The Manuherikia Scheme was designed and constructed by the Public Works Department over the period of 1910 to 1922 and by 1925 was irrigating 2282ha in the Chatto Creek, Springvale, Letts Gully and Dunstan Flat areas.

In the Omakau area, irrigation was first developed from the mining races in the Thomsons, Chatto, and Lauder creek catchments in the early 1900s.

In the 1930s a larger scheme was developed by the Public Works Department for the Omakau area.

Over time, the Public Works Department used Falls Dam to supplement water supply to the four schemes that took water from the Manuherikia River.

In the years that followed, water users developed their own ways of managing the river.

The initial flow-sharing regime was developed by the Ministry of Works using the water stored in Falls Dam to supplement the supplies to the four irrigation schemes.

The irrigators in the catchment developed flow sharing agreements to more efficiently use the water resource. 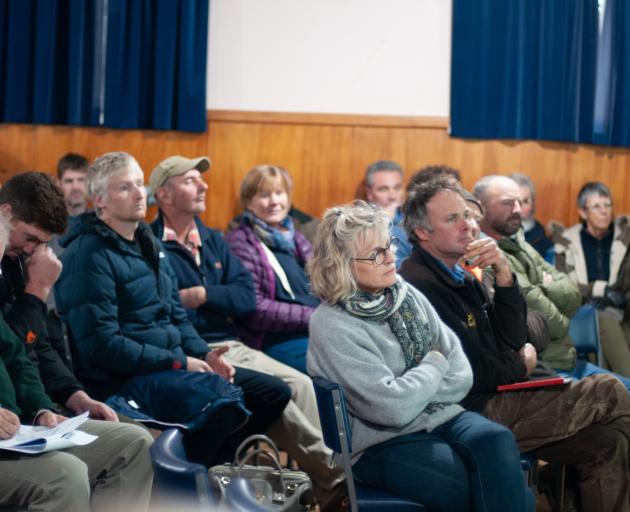 Feelings have run high at packed public meetings in Alexandra and Omakau over the Otago Regional Council’s five flow options for the river. PHOTO: SHANNON THOMSON
Privatisation and complication

The flow-sharing agreements were formalised when the schemes were sold to the irrigators in 1990 and the Falls Dam Company was formed to manage the dam.

Agreements were also extended to include the other private water right holders in the catchment.

This allowed for a rationing regime, whereby irrigators agreed to cut back on irrigation based on the remaining water stored and the level of flows in the lower Manuherikia.

The flow sharing agreements were based on a priority system of the old mining privilege water rights (now referred to as deemed permits).

Under the mining legislation, water rights were granted a priority based on the date that they were issued.

Accordingly, an early water right had the right to take water over any other water rights in the catchment that were granted at a later date.

As long as the mining rights were being used and were renewed before they expired, they retained their priority.

The four schemes that are shareholders in Falls Dam have water rights with an array of priority dates.

The Blackstone Scheme and the Manuherikia Scheme hold the oldest water rights (of the four schemes) and the Omakau and Galloway Schemes have older water rights on the tributaries.

A water-sharing agreement between all the water right holders based on their relative priorities would be very complex and most likely unworkable.

It was also critical to have the higher-priority takes located lower in the catchment be parties to the agreement so that water was shared the length of the river.

However, the existence of the priorities was controversial and a catalyst for the agreement.

During low flow times, some of the irrigators from the subcatchments also reduce their takes along with the four on the main stem of the river.

When the Crown sold the schemes, Falls Dam was included in the assets of the Omakau Scheme, although the company was formed on behalf of the four irrigation schemes in the Manuherikia Valley to operate and maintain the dam.

The company’s constitution sets out how the members are to share water in the event of a water shortage. The overriding determinant for the flow sharing regime is to keep flows in the lower Manuherikia River above the current voluntary minimum flow of 900l/s at Campground.

Water users in the Manuherikia have been preparing for the replacement of deemed permits and water permits for years, and have been active in seeking a  comprehensive, appropriate limit setting plan change for the Manuherikia that is compliant with the national policy statement for freshwater management.

This work included the formation of Manuherikia Strategy Group in 2011.

This group was formed to investigate the best way to use the valley’s available water, to jointly benefit landowners who need water and the environment.

Its focus included the expiry of deemed permits, the possible effects of a revised minimum flow and allocation limit for the catchment, and options relating to Falls Dam.

A large body of studies and assessments was commissioned by the group, including the development of the GoldSim hydrology model for the catchment.

The GoldSim hydrology model had since been used by the council to further understand the hydrology of the catchment.

This highlighted the catchment had been actively working towards a catchment-based solution for at least a decade, including regard to the replacement of permits.

The Manuherikia catchment is the most complicated catchment supporting irrigation in Otago and possibly New Zealand.

Characteristics of the catchment include high values for recreational fishing, swimming and boating in selected reaches; habitat for indigenous species; cultural values and mahinga kai; and more than 600 water users supporting rural businesses and tourism as well as one central rural town — Omakau — and other smaller rural centres.

Others are all the tributaries, one large instream communal storage dam and augmentation of river flow for downstream abstraction.

Juggling these competing interests is at the heart of the minimum flow debate and that is a chapter that is yet to be written.