The deal, worth an estimated $1 billion over 15 years to the New Zealand economy, would eliminate tariffs on all New Zealand exports, including honey, wine, kiwifruit, onions, most industrial products and - crucially - a range of dairy and beef products.

It also includes provisions ensuring animal welfare, and commitments to address environmentally harmful subsidies like those for fossil fuels or overfished stocks.

More than 97% of tariffs will be removed as soon as it takes effect, but would take up to five years for dairy and 15 for sheep meat and beef tariffs to be completely removed.

Britain and New Zealand would now work towards getting a final agreement in place, just over a year after talks first began in June last year.

New Zealand, after Australia, is the second country to secure a Free Trade Deal with the United Kingdom, post-Brexit.

"It's one of our best deals ever and secured at a crucial time in our Covid recovery," Prime Minister Jacinda Ardern says.

"The deal substantially cuts costs for exporters and businesses and provides greater access to the United Kingdom's market." 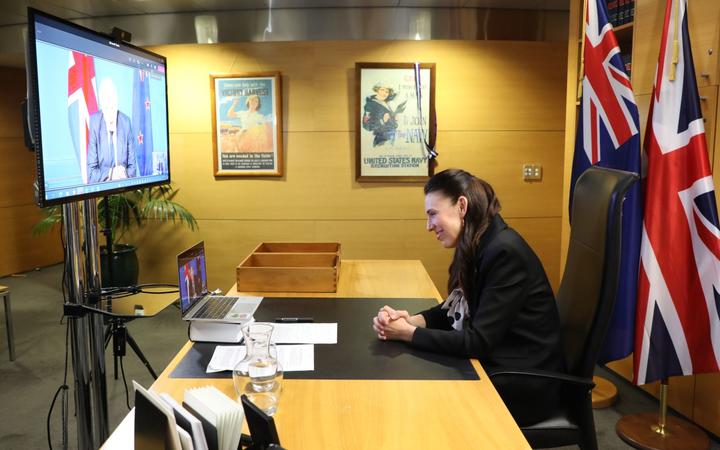 "This deal serves New Zealand's economy and exporters well as we reconnect, rebuild and recover ... and look forward into the future," she said.

In a statement, Johnson described the new trade deal as "the cherry on the top of a long and lasting partnership between the United Kingdom and New Zealand".

"It is good for both our economies, boosting jobs and growth as we build back better from the pandemic. We already share deep ties of history, culture and values, and I look forward to the next chapter in our friendship."

Speaking from his managed isolation and quarantine room after a trade trip to Europe, Trade Minister Damien O'Connor, said this represented "a new era of market" for New Zealand exporters.

"It was crucial our agreement needed to provide comprehensive and commercially meaningful access for New Zealand exporters and businesses, and especially to those sectors that are the backbone of New Zealand's economy such as our dairy and meat producers."

Investor state dispute rules were a major bone of contention in the Comprehensive and Progressive Agreement for Trans-Pacific Partnerships, but O'Connor said they would not feature in this deal.

O'Connor said it also "recognises the unique and historical relationship that exists between Māori and the British Crown which is reflected through an indigenous chapter creating a platform for cooperation on a range of issues important to Māori," with New Zealand the only country globally to "successfully include such a chapter in two Free Trade Agreements".

"I want to personally thank Secretary Trevelyan who made progressing this free trade agreement a priority and I look forward to working closely with her on a range of future matters," he said.

The agreement in principle released today sets out the key elements of the free trade deal with the UK, with the text to be finalised over the coming months. O'Connor said they hoped to have it done by the end of the year.

Alongside the deal are talks to "improve and extend" working holiday arrangements, with Ardern saying that would be similar to what was recently agreed with Australia, to "consider how people-to-people links can be deepened even further".