Ploughing with horses 'luck of the draw' 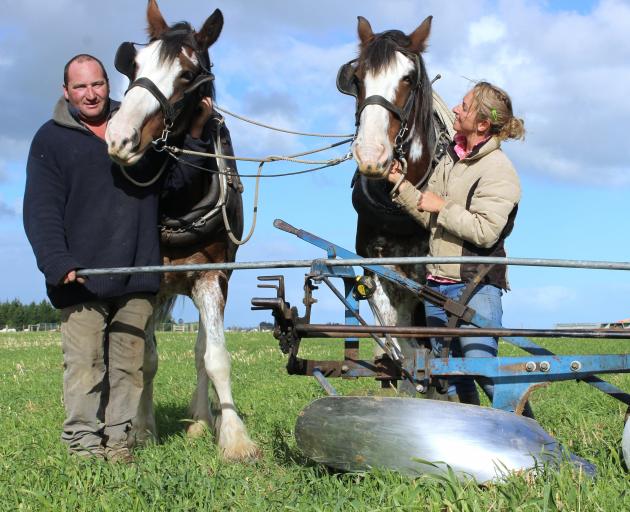 Middlemarch horse ploughers Sean Leslie and Casey Rae give Anna and Nugget a pat for a job well done after practising for this weekend's National Ploughing Championships at Thornbury. PHOTO: NICOLE SHARP
Straight and steady is the aim of the game, but it is no easy task with Anna and Nugget, who have minds of their own.

The two Clydesdales are part of Sean Leslie and Casey Rae's horse ploughing team, from Middlemarch, which will be competing at the New Zealand Ploughing Championships in Thornbury this weekend.

They are one of six horse teams competing in the event and they will attempt to plough the straightest, neatest and tidiest plot, but a lot of it was luck of the draw, Mr Leslie said.

"It does depend on soil conditions and being able to tackle it and master it."

Every paddock ploughed was different, and it was all about being able to adjust to the conditions, he said.

A ploughman since an early age, Mr Leslie began horse ploughing five years ago, while Mrs Rae started in May last year.

Wanting to give it a go, she said to Mr Leslie if he ever needed a driver, to give her a bell.

When Mr Leslie's old partner hung up the reins, he got in touch with her, and the rest is history.

Mr Leslie, on the other hand is a contractor, but it was still quite the learning curve going from horsepower to horses, as well as going back to a single-furrow plough, he said.

He started out after some arm twisting from renowned horse ploughman Dave Murdoch, also of Middlemarch.

Nugget and Anna were Mr Murdoch's horses, and while Nugget had three finals under his belt, Anna was a rookie, competing for the first time at a national event.

Mrs Rae will drive the horses, while Mr Leslie will do the ploughing, with a Reid and Gray single furrow plough.

In preparation for the nationals, the team competed at Waimate and Palmerston ploughing matches at the weekend.

"It's a bit hard because the season is May to November, so you don't get a lot of practice in," Mr Leslie said.

Following back-to-back wins at the last two national finals for Mr Leslie, the pair had high hopes of winning again this year.

The horse ploughing final will include two North Island teams, two from Canterbury and two from Otago-Southland.

The New Zealand Ploughing Championships are being held on a property on the Thornbury-Waimatuku Rd tomorrow and Sunday.

There are 20 competitors in the Silver Plough and Reversible classes, including seven from Otago-Southland.

They will be vying for two places to represent New Zealand at the world championships in Ohio next year.