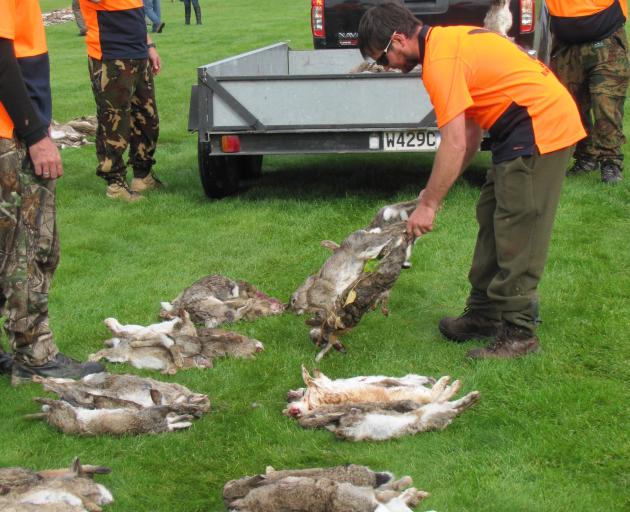 The first batches of the virus were released in Central Otago this week at two sites monitored by Landcare Research.

Hunt convener Dave Ramsay, of the Alexandra Lions' Club, said because there were so many rabbits in the district, the organising committee decided it was necessary to support the introduction of the virus by not holding the hunt, which attracts hundreds of people from across the country.

"We made the decision to see this thing [the virus] work," Mr Ramsay said.

Otago Regional Council environmental monitoring and operations director Scott MacLean said 10 of the council's 100 doses were released on Monday night and the virus had since been released at sites in Central Otago and Coastal Otago.

"Fairly soon we should see any sort of results coming from the immediate release site, because the incubation period is quite short. But then ... from there the natural spread of the virus, that will be a little bit longer to see the natural effects of that."

The virus, which does not affect other animals, could be spread through rabbit-to-rabbit contact, but also through droppings from animals that preyed on infected animals, or carrion flies and blowflies.

Council staff would work every night until the 100 doses were distributed, by hand, in laced carrots.

The Landcare Research website says farmers are asked to leave rabbits and rabbit carcases undisturbed at release sites for six weeks after the release so the new strain could become well established.

Mr MacLean applauded the move to postpone the hunt.

"We recognise this is an iconic annual event that attracts people from far and wide and understand many people will be disappointed by the decision," he said.

It showed the Alexandra Lions Club had its "community's interest at the forefront of their minds".

Mr Ramsay said the club had not yet decided on another date for the rabbit shoot as it needed to consult with farmers.

The only other time the hunt has been postponed was in 1999 because of drought.