Her family has had the hunting operation for about 30 years and in a normal year she employs seven staff and provides accommodation for 70 to 100 clients in Wanaka and the Leithen Valley, near Heriot, who come to shoot red and wapiti deer, tahr, chamois and fallow bucks on guided trips.

Clients are mostly American, with some Europeans and a few Australians.

"It was heart-wrenching to let our staff go, as we are a tight team.

"I still have to cover all the running costs. My brother, sister and parents have a farm and I have been able to fall back on them." 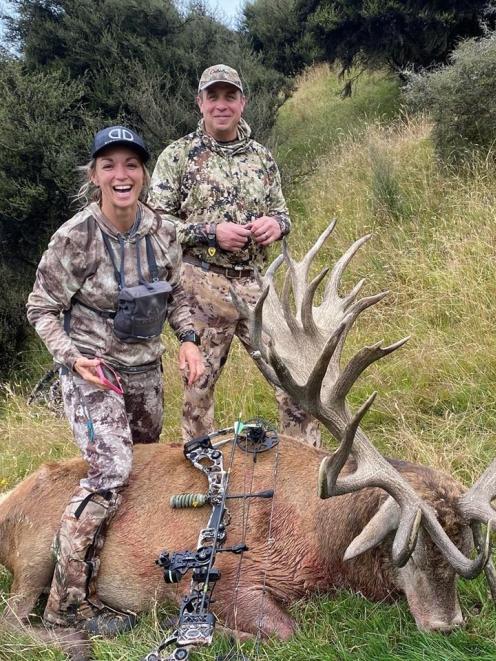 Rachel Stewart, of Leithen Valley Hunts, has had no trophy-hunting clients from overseas since New Zealand’s borders closed earlier this year. She usually has up to 100 clients during the season, most of them from the United States, like Corey Sanchez. PHOTO: LEITHEN VALLEY HUNTS

Although she buys in some trophy deer, Ms Stewart breeds most of them on the farm.

The operation is going into winter fully stocked with trophy animals.

"There is a couple of hundred animals that have not been shot, that could have been.

"What makes it tougher all round is that some of the animals that have not been shot will not survive through winter.

"We do have some that will come down to the crops in winter and some will carry on to the next season."

One or two local hunters were allowed to hunt to fill their freezers.

"That is keeping me sane."

Each hunting package was a different price, although she declined to say how much she would earn because it was commercially sensitive.

In addition, the trophy market was competitive, with about 70-plus other companies vying for the same market.

"I am looking at different options and ways of making money as it looks as though it will not be much of a season next year either.

"We could have people from Auckland coming down for a getaway, maybe kids’ hunting camps or retreats.

"After 30 years we thought it would be gun laws rather than Covid-19 that would see the hunting die out maybe.

"We never thought Covid would happen.

"When we are back up and running, I will be happy."

Chris McCarthy, and his wife, Bronwyn, have been running their hunting and guiding business, Lake Hawea Hunting Safaris, since 2006 with leased access to nearly 35,000ha.

He had been fully booked for this season and had bookings into 2021 and 2022.

This year, they had one client through, just before the border closed, for eight days of hunting.

About 40% of his clients usually came from Australia, with the balance from the United States, Canada and Europe.

He also spends three months a year, during the off-season, as a full-time guide in British Colombia, but was unable to go this year because of Covid-19 restrictions.

Usually the business focuses on overseas clients with only one or two New Zealanders booking guided hunts a year.

However, he has been promoting his business to New Zealanders.

"Since lockdown I have had one Kiwi client hunting stag and have two Kiwis booked in to hunt tahr and one to hunt chamois in September.

"They are helping to take the bottom out of the [economic] drop so at least we have got something."

He usually has bookings for up to three years in advance and has deposits that have been paid, which will go some way to tide them over until next season.