Second visit this month for Guy 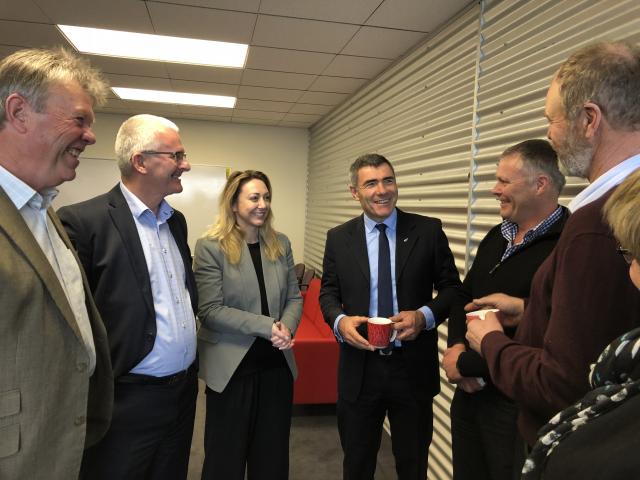 National's agriculture spokesman Nathan Guy (centre) and Invercargill MP Sarah Dowie, talk with agribusiness representatives in Invercargill last week. Photo: Supplied
Areas of the primary sector continue to thrive in Southland and it is being noticed.

National's agriculture spokesman Nathan Guy was in Invercargill last week with Invercargill MP Sarah Dowie, talking to businesses and leaders in the sector.

Mr Guy said it was the second time he had been in the region in a month.

''I was down for young farmers [the Young Farmer of the Year contest] as well which was hugely successful.''

Mr Guy met with scientist Clint Rissmann and talked to an agribusiness audience at a lunch on Friday.

He said there were some huge things going on in the primary sector in the region, both positive and negative.

One of the major issues faced by farmers was Mycoplasma bovis, he said.

''My sympathy goes out to all farmers who have had their herds culled.''

It was a big challenge in front of the sector and as the bulk milk testing got under way, a better picture would be painted.

Economically, things were looking positive in the dairy and red meat sector, he said.

''Farmers have been talking $150 a lamb which is fantastic.''

In the dairy sector the forecast payout of $7 per kg of milk solids was also good news.

''That's really the engine room of the primary sector [in Southland].''