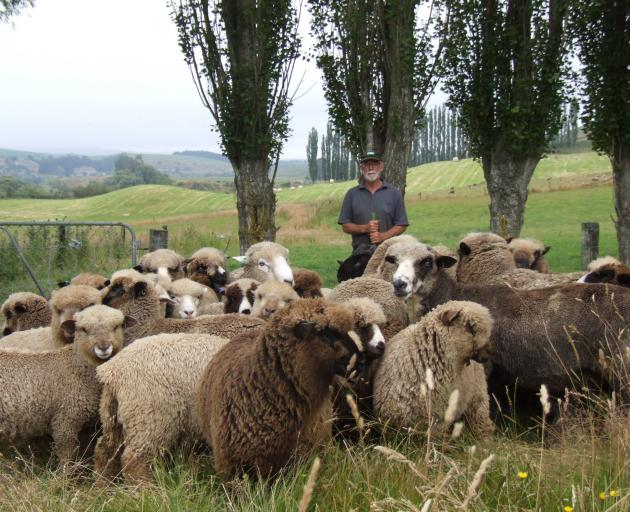 Waimate teacher and black and coloured sheep breeder Stuart Albrey at home on his farm. PHOTO: SALLY RAE
Fancy a black sheep in the family?

Then South Canterbury is the place to be on Saturday, February 5, as the Black and Coloured Sheep Breeders Association of New Zealand holds its annual sheep sale, followed by an open day for all interested people.

The sale was expected to attract entries from Canterbury to Southland. Sheep viewing would begin from 10.30am and the sale would begin at noon.

In a new initiative, the sale would be followed by an open day at Stuart and Sue Albrey’s farm, near Waimate, from 2.30pm, where local breeders would display different breeds and highlight their specific characteristics.

Usually, after the sale, breeders headed to the Albreys’ for a couple of workshops, followed by a barbecue. But they had run out of workshop ideas that were not repetitive, and there tended to be the same people each year.

Mr Albrey, who is the South Island delegate to the association, was thinking about what they could do "a wee bit different". Generating membership was something that was often discussed and so it was decided to hold an open day for the public; the sheep sale had always been open but only members could sell sheep at it.

His aim was for people to see how they could use black and coloured sheep to fit their needs on their own properties, whether it was as a "lawnmower" through to producing fine fibre to be made into lightweight garments.

"The whole gambit," he said.

Information would also be available on breeding sheep while Canterbury breeders Leo and Karen Ponsonby would show how to process the raw fleeces through to yarn.

Mr Albrey was originally from Palmerston North and moved south in 1986 to a teaching position at Waimate High School.

He coached athletics and the parents of some of the children he coached had a small coloured flock and the couple got half a dozen hoggets from them. A close relationship with the late Bruce and Ellen Anderson provided access to "some of the best genetics" and their flock numbers grew.

After tiring of having "little lease blocks here and there", the family later bought their 50ha property.

Having knitted from the age of about seven or eight, he was very keen on handcrafts, using his homegrown wool.