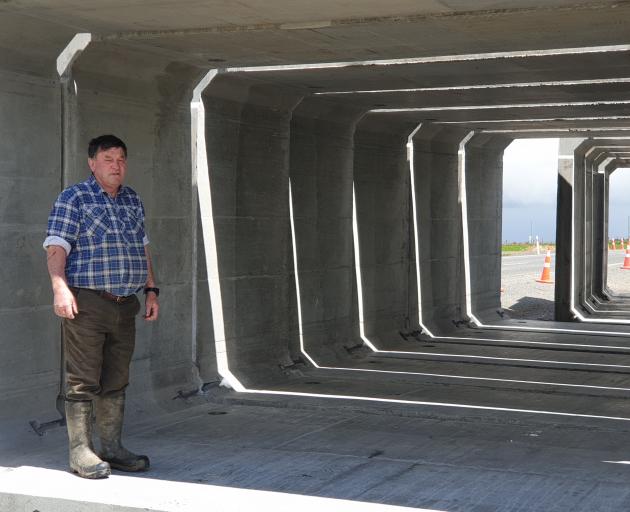 Jim MacDonald stands inside the concrete panels that are soon to be installed as a stock underpass on Mt Gowrie Station on State Highway 87.PHOTO: SUPPLIED
In 1930, Jim MacDonald's father was one of many stock drovers on what is now State Highway 87 to take sheep through from Waipori to the Waipiata saleyards; he would pick up different station mobs on horseback with a couple of heading dogs.

These days the MacDonald family require three staff, high-visibility vests for people and dogs and flashing hazard lights on the top of their utes, and that is just to get the stock across the road.

This year Mr MacDonald said the time had come to install a stock underpass as it was no longer safe to cross stock over State Highway 87.

"We've had a few dogs go under the wheel of a vehicle and the logistics have just become very difficult. The road just seems to get busier and busier.

"The way the farm is set out, we have all our finishing ground on the other side of the road from our yards. We need to cross stock over the state highway a lot."

Road users, Mr MacDonald reckons, have changed over the years. "We try to avoid Monday mornings when the agents are coming through and Friday afternoons when the holiday-makers are on their way to Central Otago. People are just always in such a bloody hurry these days."

Mr MacDonald adds the most patient drivers are the truck drivers; "stock trucks, milk tankers - they are just great".

Underpass ups safety
Mr MacDonald investigated the stock underpass back in 2014, but lamb prices at the time made it untenable.

"We've had a couple of good seasons since then. We decided to crack on and do it this year. Good lamb prices may not be around forever," he said, laughing.

"There's no return on investment for this; it's just ticked up as capital development for the farm. It's for the safety of everyone concerned, and makes stock movement a lot easier. We won't know ourselves when it's finished," he said.