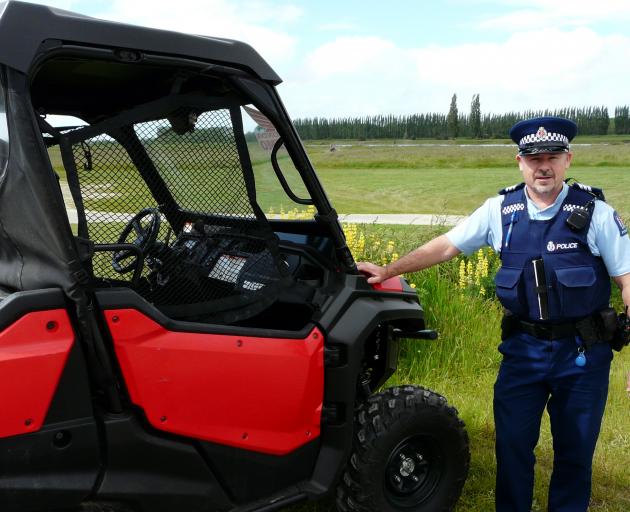 Sergeant Robin Hutton, of Balclutha, says easy-to-steal farm vehicles like this side-by-side should be stored out of sight in locked sheds with the keys removed. PHOTO: RICHARD DAVISON
Those living rurally should be taking simple steps to avoid falling prey to current trends in country crime, police say.

Levels of most types of crime remained steady in rural South Otago, and on average police were dealing with an incident every week, Sergeant Robin Hutton, of Balclutha, said.

Because of the remoteness and isolation of many rural properties, a certain segment of criminals targeted them specifically, regarding them as "easy pickings", he said.

Types of rural crime varied, but tended to focus on burglary and planned or opportunistic theft of machinery, stock and fuel.

"We see a lot of quad bikes and farm bikes disappear, other light machinery, scrap metal and fuel thefts; and, perhaps more worryingly, firearms being stolen off farms."

Sgt Hutton said it was understandable those living rurally developed a sense of security because of their isolation, but he warned against complacency.

"The thefts we tend to see relate to vehicles or other items parked outside, keys in the ignition, and visible from a nearby public road. Similarly, on-farm diesel tanks where they're perhaps easy to access and hard to see from the homestead can be vulnerable, as are stock, for obvious reasons."

Sgt Hutton said he was heartened to see an increase in farmers taking steps to protect their property more securely, and emphasised prevention was key to reducing rural crime.

"Obviously, if we can deter criminal activity from occurring in the first place, that's the best possible outcome, and there are several things people can do to move towards that."

Thanks to decreasing technology costs, wireless domestic CCTV systems which fed into a person's smartphone were now an affordable option, he said.

"Aside from simple steps like removing keys and locking property and fuel bunds securely, if you can then double-down by installing CCTV in key locations and, more importantly, clearly alert potential thieves that CCTV is in place with appropriate signage, that can prove an extremely effective deterrent."

Sgt Hutton cited a recent case at a rural property on the Waipahi Highway, near Clinton.

"Although in this case CCTV hasn't prevented a crime from occurring, the burglary and subsequent theft of a firearm was recorded on a neighbour's system, and a partial registration and vehicle ID ascertained."

A group of suspects had been identified, and investigations were continuing.

He said the burglary also illustrated perhaps the most effective way to tackle rural crime.

"Communicate your concerns. If you see something suspicious, or believe you've lost stock or fuel, talk to your neighbours and talk to police.

"Please don't just shrug your shoulders, because your information may help us build a pattern of activity in an area and prevent further issues."