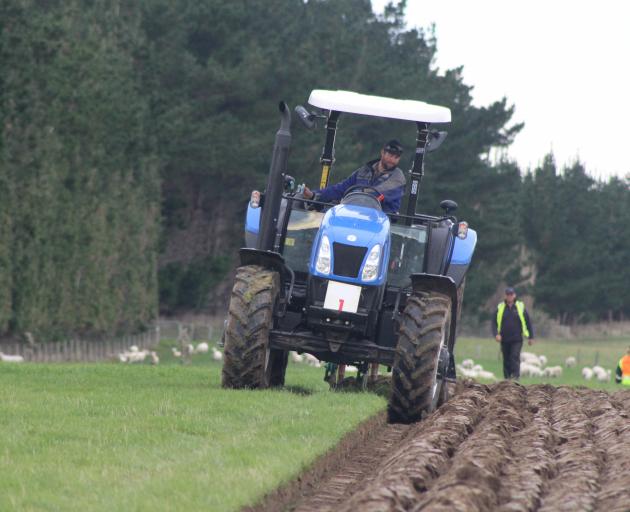 Last year's Young Farmer of the Year Nigel Woodhead, of Milton, competes in the Silver Plough class at the New Zealand Ploughing Championships earlier this year as a special guest competitor. Photo: SRL files
To prepare the ground for the next generation of ploughers, a new Young Farmers ploughing competition is being held in conjunction with the New Zealand Ploughing Championships.

Graham Miller, of Gore, said a conversation between him and Hayden Allison, of Milton, was the starting point of the new competition.

Mr Miller said he had been on the ploughing executive for about 10 years when he stood down two years ago and there had always been a desire to get more young people involved and not just as competitors.

Last year, he and Mr Allison suggested getting former Young Farmer of the Year Nigel Woodhead to plough at the national championships, held in Thornbury earlier this year, which the executive was all in favour of.

''It's just snowballed from there ... It's not just competitors - it's judges, plot stewards and younger executive members,'' he said.

New Zealand was scheduled to hold the world championships in 2028, and some younger people would need to be involved to make it happen, Mr Miller said.

As times changed numbers dwindled and the Young Farmers contest had been created in an attempt to get more young people involved in the sport.

The Young Farmers competition had been developed for next year's championship.

''We did have a couple of young farmers plough at Methven.''

As part of the new section, there were plans to hold a few coaching days to teach those interested about ploughing.

Competitors would have to be 35 or under at the time they qualified to be able to enter the Young Farmers contest and they must plough in a commercial/young farmers class at a ploughing match run by an association affiliated to the New Zealand Ploughing Association.

Those interested in taking could get in touch via the New Zealand Ploughing Association Facebook page, or by contacting their local ploughing association, Mr Miller said.