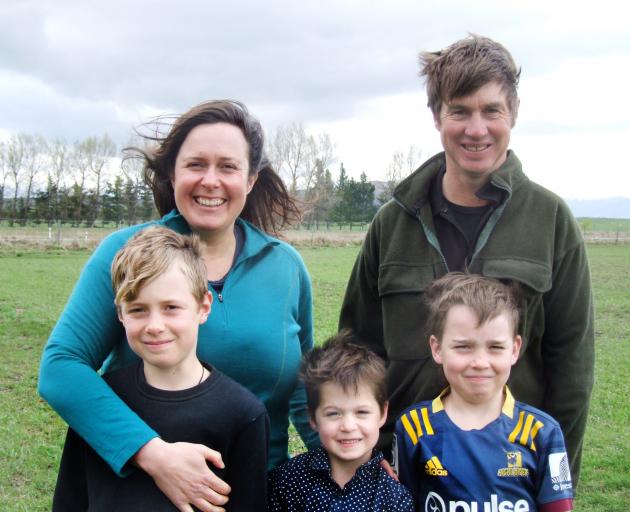 Alasdair (10), Brodie (8) and Emmett (7) are the sixth generation to live in Ida Valley, in the heart of rural Central Otago.

Their forebears emigrated from Scotland in 1876 and settled in the valley.

Consecutive generations of the family — not always in a direct line — have farmed there for 139 years. The first Nicolson worked as a shepherd for six years at Ida Valley Station.

The boys’ parents, Cam and Amy, felt a real obligation to those who had come before them, to their boys, and to future generations, to look after their land and the community. And that, as Mr Nicolson succinctly said, was what got them out of bed every morning.

The couple have welcomed the recent establishment of an Ida Valley catchment group. The first meeting was held at Poolburn in August, to discuss value setting, identifying what common values were held collectively.

The workshop session was supported by Otago Catchment Community which worked specifically with catchment groups throughout Otago which had a focus on rural water quality.

Those questions were broad enough to have people think about more than just on-farm and environmental and economic factors, as they also considered the social and cultural aspects of the catchment.

The values were then established as waterway wellbeing, flow, wise water use, kaitiaki of the community and leading by example. A meeting last week was about looking at some of the actions the group they needed to do.

Local farmers Sam Stevens and Ro McDiarmid, both on the Beef + Lamb New Zealand Central South Island Farmer Council, were "on the coalface to a degree" with the environmental regulations coming in through their B+LNZ involvement, and were involved with establishing the group.

Mr Stevens said it was likely the group would eventually split into the Poolburn Creek and the Ida Burn Creek, as the creeks were very different.

Poolburn was a clay-based drain and Ida Burn was a shingle bed — and when it came to testing the quality of water leaving the valley, it came from two different sources, Mr Stevens said.

About 20 people, representing about 15 farms, attended the first meeting and Mr Stevens said the social interaction was also important.

For the catchment, connecting with community was as important as the environment development that farmers wanted to do.

That goes down to mental health. Being able to get out and talk about non-farming related things — "just something away from farming gives you an out" — was important, Mr Nicolson added.

Mr Stevens envisaged having working bees in the future, whether doing plantings or fencing, where everybody gathered together and had a barbecue afterwards, getting a feel of achieving something for the community and the environment, as well as keeping those connections.

With the closure of the pub, the area did not have a gathering place and he was trying to ensure that those farmers who had children that had left the local school were also involved. There was also a desire to get the wider community on board.

Mr Stevens was interested in the idea of kaiwhenua (food from the land). The valley was a food source — it had been for the Maori who were travelling through the area and hunted moa, until now, when it was still a food bowl.

If environmental regulations meant farmers were unable to keep farming, then that source of food would be lost.

Farmers were "definitely" considering the environment, and what was produced in the area also had to be considered as a resource.

Environmental, social and economic sustainability had to be maintained, without putting one above the other, Mr Stevens said.

There was no doubt that farming in the last 40 years — ever since Rogernomics — had focused on economic survival.

Farming "completely changed" in the 1980s to survive — at a cost to the environment.

There was a saying that you had to "be in the black to be green" and, if farmers were not making any money, they could not do environmental protection work, he said.

"We would love to do more environmentally. We have to do it as we can afford it," Mrs Nicolson added.

Mrs Nicolson said farmers were aware that changes needed to be made around how they ran their businesses.

That was not going to happen overnight and help was needed. A "top down" approach to regulations with minimal consultation was not helpful, she said.

Deer were a particular interest for Mr Nicolson who encountered the animals when he headed south, after leaving school, to work for Peter and Lynette Stevens at Balfour — "a very patient couple", he said, laughing.

He then worked overseas, as a shepherd at an agridome near Kyoto, in Japan, and then on his OE, where he ended up driving tractors in Ireland, followed by a stint in Australia doing the same. He returned home permanently in 2003 and his parents Stu and Jan continued to be well involved in the farm.

"He’s [Stu] here every day and we can’t do without him. Just having that knowledge around the place that money can’t buy," Mrs Nicolson said.

Mrs Nicolson came from a farming background, her parents worked on high country stations "all over the place", and she now worked as a teacher aide and cleaner at nearby Poolburn School, four days a week.

It was a busy lifestyle for the family with their various commitments but it was an area that they loved living in.

Mr Nicolson, who is deputy controller of Blackstone Rural Fire, said joining the fire service in 1999 was out of his comfort zone, but it was a "community thing".

The Ida Valley community was"awesome" his wife added, while Mr Nicolson said "most people would give you the shirt off their back".

The venison market had been severely affected by Covid-19, with the product being highly exposed to the European restaurant trade, and some deer farmers were changing to a velvet system.

Mr Nicolson was wary of "forever chasing rainbows", preferring to stick with what he had, and he had confidence venison prices would come right.

"I love the deer. In farming, you’ve got to have your own little things you like, that you’re passionate about. They are a beast of their own, they are majestic ... [and] always an entertainment value," he said.

The couple were part of the deer industry’s Advance Party’s initiative, which involved groups of motivated deer farmers working together in identifying opportunities to improve profits on their farms.

That had been a learning curve, learning from a wide mix of farmers from irrigated to hill country, studs to fattening properties, and also the opportunity for social interaction.

There was much uncertainty in the farming sector and the family had been thinking about things they could diversify into on farm.

A poster on the fridge, with input from their boys, showed a wide variety of "random" suggestions and options, from turkeys, free-range chickens and pigs, to hazelnut trees, pomegranates and pivots, as well as selling their produce direct to customers.

"It’s how you make the best of those opportunities, decide what opportunities suit here, our family," Mr Nicolson said.

Mrs Nicolson has been establishing a native plant nursery, initially to supply their own property but, if there was demand, she would make it bigger, she said.

Establishing her nursery was something that she could do to keep costs down. She had used resources available from B+LNZ trying to figure out what to do, as she admitted she was not a gardener. Doing something like that also made her feel like she was having an input into the farm.

Trying to get trees to grow in the Ida Valley was not easy, as nature dictated what could and could not be grown there.

It was important to get eco-sourced plants to use, which were already growing in the area.

Mrs Nicolson had found a research paper that had been done on what flora and fauna was in the valley in pre-settlement days useful.

Trees, Mr Nicolson said, were vital in the valley but a lot of planting work was trial and error.

The Nicolson family were developing a wetland area, in a swamp area in a low point on the farm, and working with pupils from Poolburn School to assist with it.

It was great to get the children involved with the "bigger picture" of the valley as well, she said.

While the trio acknowledged that every catchment was different, Mr Nicolson was very impressed with the efforts of the award-winning Pomahaka Water Care Group.

"Those guys down there are the benchmark at the moment," he said.