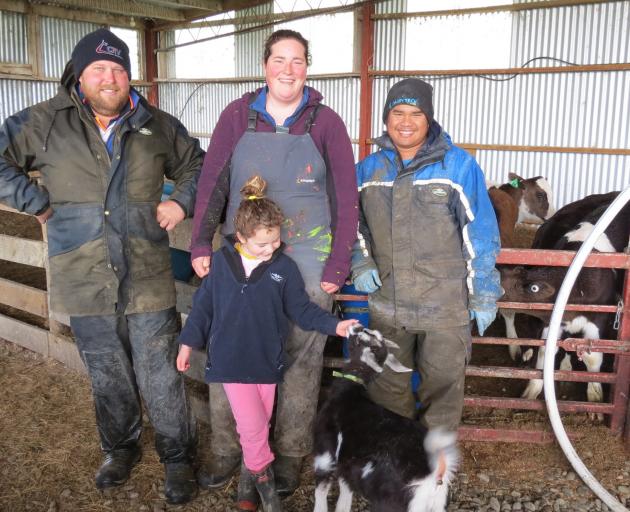 Calving is in full swing. Balfour 50/50 sharemilkers (from left) Nick and Anieka Templer, with daughter Maycie (5), and staff member Emman Orendain are kept busy with this year's crop of calves. Photos: Yvonne O'Hara
Anieka and Nick Templer like a bit of variety in their dairy herd, adding panda-eyed, triple-cross Montbeliarde, Normande, Fleckvieh and Aussie Reds to their mix.

They are are 50/50 sharemilkers on 230ha near Balfour, with 630 cows, and they are targeting 500kgMS/cow and 330,000kgMS production this season. Their herd includes 35 pedigree Ayrshires.

Mrs Templer grew up on a dairy farm and has always been interested in the more unusual cattle breeds.

In addition to their standard Friesian-cross cattle, they already had two cows, two heifers and four Montbeliarde calves, two Normande heifers and some Fleckvieh and Aussie Red calves, she said. 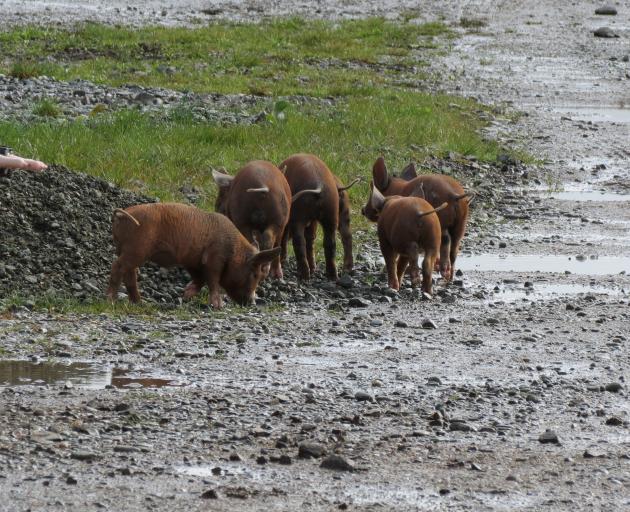 The Templers encourage their Filipino staff members to rear pigs for pork and for sale. In the meantime, the piglets range free over the property.
''They are European breeds and all originated from Simmentals,'' Mrs Templer said.

The original semen straws were imported by Mrs Templer's parents, Frans and Jeanine Venekamp, and she inherited them when they retired from farming.

They have been stored at -200degC at a facility in Edendale for the past 10 years, but are as good as fresh and they used about 30 in their cows during the past two seasons.

She is intending to buy more and has been looking at catalogues for Norwegian Reds, Viking Reds, Danish Jerseys, Linebacks and Blaarkops.

''Blaarkop are a rare breed, from the same part of Holland I am from,'' she said.

''I remember Mum and Dad talking about them.'' 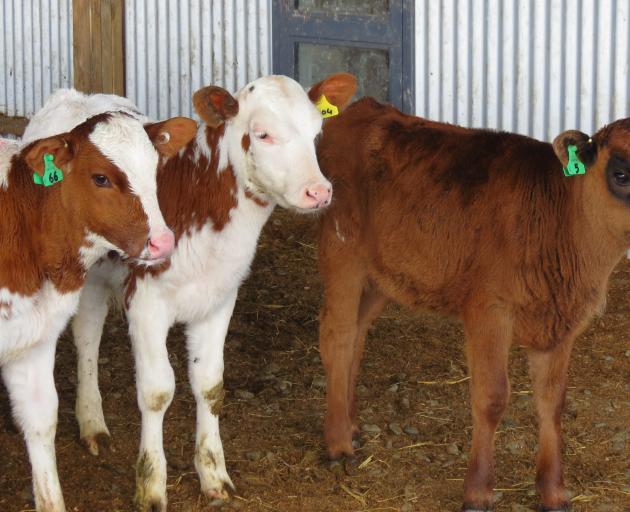 The Templers have introduced more unusual breeds into their dairy herd, including Aussie Reds and Montbeliarde.
Mr Templer said they were looking forward to seeing the production impact on the herd of the different varieties, but as they had only become 50/50 sharemilkers this season, they had to maintain the breeding worth of their herd.

That meant they kept 80% of their herd as standard Friesian-crosses, using CRV bulls, and nominated only 20% of their cows for insemination using the more unusual breed straws.

The daughters would be mated back to Friesians in a triple-cross.

''The gene pool in New Zealand is getting smaller and smaller and the traits are not getting any better,'' she said.

Mr Templer said they sold the bull calves for beef and they were popular because they grew quickly, although they had kept a couple of Fleckvieh and Montbeliade bull calves for their own use.

''With everything under scrutiny in the dairy industry, we are trying to eliminate the bobbies, and we are off to a good start with most of them being sold.

He would eventually like to try shorthorns, out of interest.