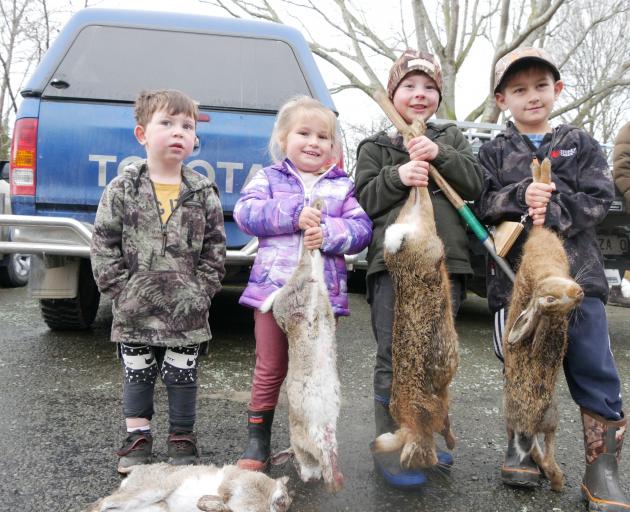 Showing off the results of a recent weekend out hunting together with their dads during this year’s North Otago Deerstalkers Association pig-hunting competition are (from left) Alby Halkett (3), Ella Currie (3), Beau Halkett (5), and Archer Currie (5). PHOTO: RUBY HEYWARD
Hunting is not just a sport.

It is also a time to have fun with the family and pass on some knowledge, hunters say.

That was the case at this year’s North Otago pig-hunting competition.

During the last weekend of June, people from all over North Otago — and further afield — headed out to catch the heaviest boars and deer, while those aged under 14 hunted rabbits, possums, stoats, wallabies and hares.

North Otago Deerstalkers Association president David Hay said there were plenty of professional pig-hunting competitions, but going out with family was exactly what North Otago’s event was about.

There were 117 entries in this year’s competition, many of which were family groups, who often entered year after year, he said.

Of the four entry categories, the under-14s made up almost a quarter of the competition.

Friends Adam Halkett and Hayden Currie took their oldest children — Alby and Beau Halkett, and Ella and Archer Currie — out for the hunt.

Archer particularly enjoyed hunting with his dad and caught the heaviest possum in the under-14 competition.

It was a good way to get on top of pest levels while people enjoyed their pastime, Mr Hay said.

Competitors trickled into Purton’s Cafe and Bar parking lot in Maheno on the Sunday to have their game weighed, before the cut-off time at 3pm. Winners were announced shortly after.