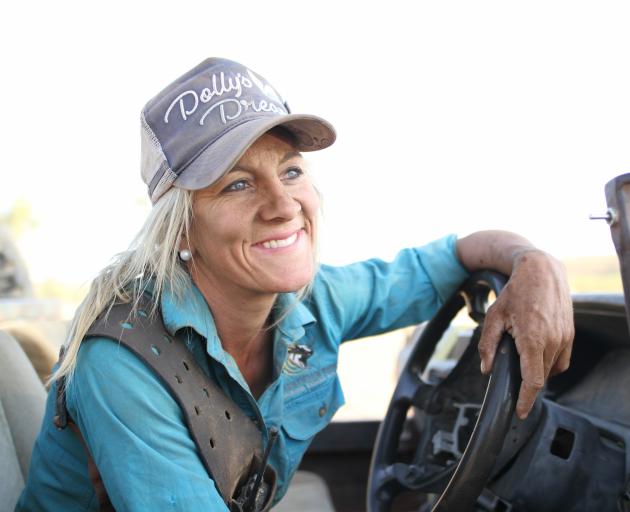 She works with her husband Willie to wrangle feral cattle in Australia’s remote Northern Territory, while raising the couple’s two young sons Charlie and Blake.

It is an extraordinary lifestyle for the couple, who hail from Central Otago, giving their children experiences that few others will ever have.

Home to spend time with family and give the boys a taste of a New Zealand upbringing, Mrs Cook outlined life on Bauhinia Downs Station, a 324,000ha property — small by the area’s standards — that the couple lease.

"I call it the Wild, Wild West. It’s like the last frontier," she said, describing what was also largely uninhabited, pristine country that was "absolutely ageless and timeless".

The property is 70km from a roadhouse — "where you can get a beer and a counter meal" — 650km from the mechanic and hairdresser in Katherine, and 1000km from Kmart in Darwin, she quipped.

The children learn through a distance education school, the Katherine School of the Air, and they have a governess.

Mrs Cook (nee Hore) grew up among the "lovely green pastures" of Becks, riding ponies and swimming at the river where she did not have to worry about crocodiles.

But the flipside for her children was that the family’s indigenous friends would show them how to call out to crocodiles and also tell them stories about their culture. 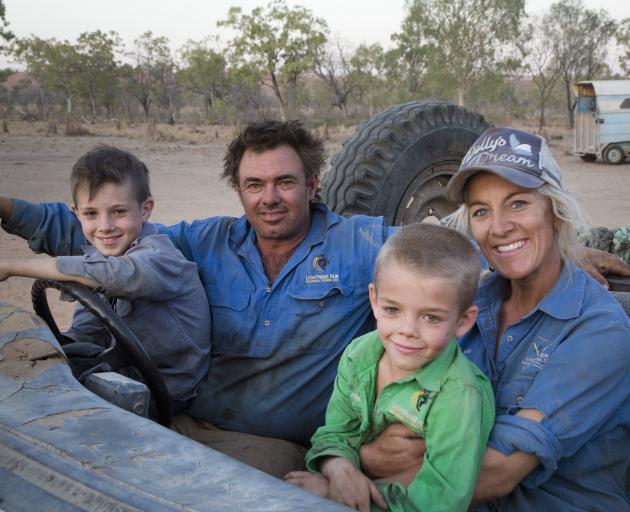 Willie and Liz Cook and their sons Charlie (10) and Blake (7).
Working in the Outback was very different from the couple’s previous life in New Zealand, where they farmed a sheep, beef and deer property at Queensberry, near Wanaka. Mrs Cook also worked at the Wanaka Medical Centre.

When the property sold, they were looking for a change and Mr Cook got a job in the Northern Territory with Milton and Cristina Jones, who featured in the Outback reality television series Keeping Up With The Joneses.

Mrs Cook recalled arriving in Australia with little more than a couple of bags, a swag and saddle — "and two wee kids".

Mr Cook worked for North Australian Helicopters, owned by Mr Jones, for two years, flying all over the Northern Territory.

But he was away a lot of the time and the couple ended up looking at "going out bush" and doing something as a family.

Some local indigenous people suggested they catch some bulls and, sitting around a teapot, a plan was hatched.

It was later suggested the couple should lease Bauhinia Downs, which was 120km one way and 90km the other, and they took on a 10-year lease in 2016.

They run a few thousand head of breeder cattle and were building up their herd through catching feral cattle which had never seen humans before.

The cattle were spotted by Mr Cook in the helicopter. He would then shift them to a flat area where he would call up his wife and several others who were driving bull-catchers (modified four-wheel-drives).

They would put a hydraulic arm around the animal’s neck, which was a safe way to catch them, and they would then either be tied to a tree or put on a truck to be transported back to base yards.

They would then start getting them quiet, introduce them to horses which would lead them in and out of the yard and, when they were quiet enough, they would be let out into the paddock. Surplus males were sold to export or the meat works.

Mrs Cook agreed bull catching was both addictive and an an adrenaline rush. They also caught buffalo which were "amazing" animals to be close to.

The aim was not to hurt either human or animal, and to "try and protect your gear as good as you can". "If we can do that every day, Willie is pretty happy," Mrs Cook said.

No mechanics were handy and many times a day, Mrs Cook quipped that she commented how she was "really unqualified to be doing this right now".

Not only was that around mechanical things, but also the likes of teaching the children and administering veterinary treatment — she had three horses choke and had to intubate them, and had stitched up dogs, as they would not have lasted the trip to Katherine and the closest vet.

There were times were she had sat in the red dust crying, as she couldn’t get a wheel nut off or something was broken that she could not get fixed — but she would always say that she would pick herself up and give it a go, and being able to do that was a source of pride.

Mr and Mrs Cook featured in a 10-part documentary series on bull catching called Outback Ringer that was filmed in 2018 and 2019. That had been a fun experience and the programme had been well received, she said.

The family lived in stock camps for large parts of the year. While the house on Bauhinia Downs had previously burnt down, they now had some demountable houses and they also now had Wi-Fi — "we’ve got the luxuries," she joked.

Living so remotely, Mrs Cook said the hardest part was being away from family and friends. She missed out on "all the nice things like getting your hair done and going to the beauty salon" and it was a novelty being able to stay in a motel with crisp white sheets, as everything was usually stained with red dust.

But there were also many upsides to life in the Outback — dust and all.

"We live out there because we just love our animals and being close to nature. Being in the thick of all that," she said.

At the moment, it was the wet season in the Northern Territory and they could not run their business as usual. The only access to the property was by helicopter, as it was cut off.

While Mr Cook remained over there and it was "terribly hard" to be separated, the couple’s two sons were having a "wonderful time" and enjoying Omakau School.

Mrs Cook, a keen rodeo enthusiast, brought a horse to New Zealand with her, and will compete on the Christmas rodeo circuit, where she is relishing the opportunity to catch up with old friends.