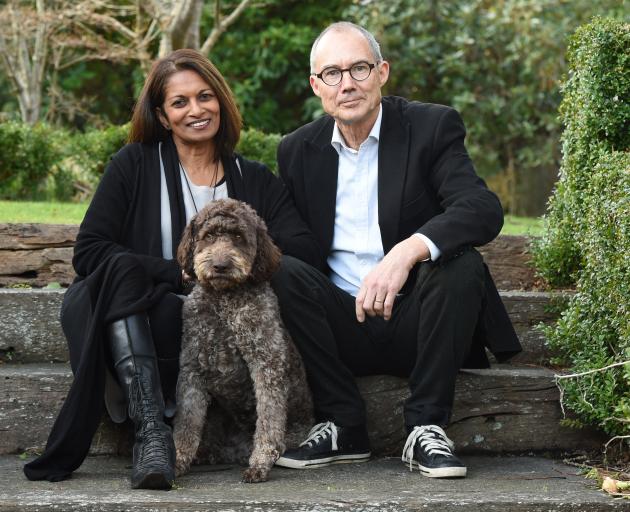 Truffle producers Mirani and Rod Keillor at home in Dunedin with their truffle dog, Rissa. Photo: Gregor Richardson
It could all have ended so badly. When Rod and Mirani Keillor were on holiday in Russia, they received a call to say wild pigs had destroyed their truffiere in Central Otago.

It was devastating news for the Dunedin couple, who were rewarded with their first crop of black Perigord truffles - described by some as ''earth's black gold'' - in 2015 after 12 years of patience.

On their return, the couple headed to Bannockburn to check on the damage and were pleased to find only a small area had been disturbed.

Further investigation led them to find - thanks to their truffle-finding dog, Rissa - the best crop of high-quality truffles they have produced yet.

Mrs Keillor believed the bumper crop was, in part, attributable to the mild winter.

The largest truffle harvested was 316g.

While the black truffles had never been grown that far south, Dr Hall believed Bannockburn could be a good place to grow the fungus.

The couple bought 240 hazelnut trees with truffle spores injected in them, unsure how the venture would go.

''It was his [Mr Keillor's] folly 15 years ago, but now it's our truffiere,'' Mrs Keillor laughed.

The couple were heading to Bannockburn this weekend to, hopefully, get the last harvest.

Defining the truffle season in Central Otago was difficult.

Sometimes, they went too early in June and the truffles were not quite ready, while other times they found them rotted in the ground in August.

Now Mrs Keillor was on a mission to get chefs excited about using the delicacy.

Already, there had been a very favourable response from those using their truffles.

All the truffles produced last year were taken by luxury Matakauri Lodge, near Queenstown, and they had also been used by the likes of Millbrook Resort to ''create wonderful things''.

But supply was often very difficult as it was ''such a hit and miss thing'' and they could not always provide them.

Some chefs wanted to visit the truffiere but that did not always work, as people wandering around meant the dog did not perform so well.

Rissa was a Lagotto Romagnolo, or Italian water dog, a breed specially bred for truffle searching.

Mr Keillor initially trained Rissa by hiding old film canisters, filled with truffle oil, in the garden, rewarding her with cheese when she found them.

Some of the momentum was lost while they waited for the arrival of their first truffles, but Rissa quickly got into the swing of finding the fungus.

Whether producing wine or truffles, they had to be patient and visionary, Mrs Keillor said.

Mr Keillor is the Otago representative on the New Zealand Truffle Association and, next month, he will attend the association's conference in Christchurch.