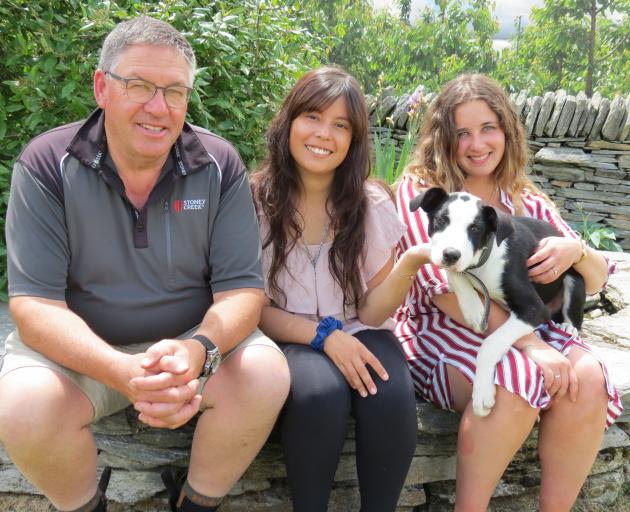 Uruguayan students Ana Goncalvez (centre) and Lorena Andiarena have just completed the year studying agriculture at Otago Polytechnic's Cromwell campus and will be leaving in February to return home. Roger Williams has been their tutor. Photo: Yvonne O'Hara
Central Otago farmers have their own way of speaking, which makes it interesting for Uruguayan students Lorena Andiarena (21) and Ana Goncalvez (24).

Ms Andiarena comes from Salto and usually works on her parents' 350ha beef property while studying to be a veterinarian.

''I have been all my life in agriculture,'' she said.

Ms Goncalvez is from Tacuarembo and had been studying farm management.

Ms Andiarena said they both had to write about why they wanted to come to New Zealand and sit an international English examination.

When they first arrived in Cromwell in February, they spent time studying New Zealand English.

''The English we studied was formal English and here, there is a lot of slang,'' Ms Goncalvez said.

''When we first came here farmers spoke so fast and we didn't understand anything.''

Now they are used to it.

''There are really nice people who always try to help us improve our English,'' Ms Andiarena said.

''Young people are more difficult to understand, while older people have more patience and don't mind repeating it slow.''

They were delighted to be able to study and work in Central Otago, but will be returning home in another couple of months.

As part of their course they have worked on Mt Pisa and Wainui stations and a Tinwald farm for the experience.

As the scholarships covered only half the study and associated costs, both work part time.

Ms Andiarena works at a petrol station and Ms Goncalvez at a laundromat.

When Ms Andiarena returns home in February she will return to her veterinary studies.

Before that she plans to work in a cherry orchard.

Ms Goncalvez will continue to work in the laundromat before returning home.

However, she intends to do some more travelling later and explore Australia.

Ms Goncalvez said farming in New Zealand was quite different from Uruguay.

''There the temperature is warmer and wetter,'' she said.

Farm input costs were far higher in Uruguay, so that made hiring labour and buying more equipment that much more expensive.

''The farmers pay too many taxes and too many costs and the money earned in production is not enough to cover everything,'' Ms Goncalvez said.

In addition, Uruguay had seasonal pasture and had to buy in more expensive quality feed for better production.

The two women have explored the lower half of the South Island, including visiting Christchurch and Te Anau.

''The funniest thing I went to was the dog derby in Cardrona,'' Ms Andiarena said.

They also both enjoyed a trip up to Mt Aspiring as part of a class trip, which she said was ''fantastic''.