Passion for industry that has a strong future

Katrina Bishop on a boat on the way to work at Walter Peak Station earlier this month. Photo: Supplied
Katrina Bishop was exposed to the fine wool industry from a young age.

She grew up at Mt Otekaike Station in the Waitaki Valley where her father Geoff had a merino stud and a passion for fine wool.

That love of wool was passed on to her — "it’s in my veins, I had no choice" she laughed — and eventually led to a career in wool-classing.

More recently, she moved to a newly-created position with the New Zealand Merino Company as a wool preparation consultant.

That title could be summed up as "a bit of everything" but basically meant she visited sheds and ensured that everyone was doing the best job they could with the resources they had, she said.

Unlike its crossbred cousin, fine wool has been enjoying a stellar run, fetching prices at auction not seen since the late 1980s and early 1990s.

That brought an additional sense of responsibility for those involved with preparing farmers’ clips, whether for auction or contracts.

Now based in Cromwell, Ms Bishop covered a patch that extended as far south as Nokomai Station, throughout Central Otago and into the Queenstown Lakes area.

She believed there was a strong future for wool growers, as global consumers focused more on natural products and turned away from synthetic fibres.

While it was a very good time to be a fine wool grower, she was also optimistic about the future for crossbred wool.

Ms Bishop started off cooking at Ben Omar Station, near Omarama, and would head down to the woolshed in the afternoons.

That further whetted her interest in the wool industry and, in 1990, she headed to Massey University where she gained a diploma in wool and wool technology before embarking on a classing career.

She learned a lot from her father and she was also grateful for the support of various mentors she had over the years.She has won various classing awards and also spent time at a woollen textile mill in Italy which was a great experience. 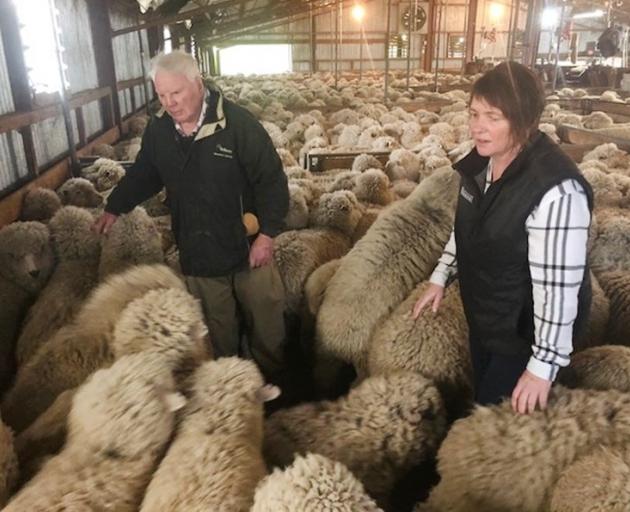 Katrina Bishop discusses wool with Alan Hore from Beaumont Station. Photo: Supplied
There were so many types of wool, just within the merino sphere, and every area was unique. Styles had also changed over the years, along with the way the wool was classed, so it had been a continual learning curve.

Wool had improved — genetics were having a big impact and sheep were also fed better than they used to be, she said.

The uses for fine wool had also been "revolutionised", with the fibre being used in activewear and more latterly shoes, with the launch of the hugely popular Allbirds range, co-founded by former All Whites captain Tim Brown.

"The world is becoming more aware of what an amazing product it is," she said.

She could use her knowledge to help ensure wool was prepared for specific end uses, whether that was suits, socks or shoes.

There were a lot of contracts in the industry with specifications that needed to be filled and worked to, or, if it was destined for auction, then it needed to be prepared suitably to get the best value for it. It was great to be working in an area where she could help make a difference for growers, doing something that she was very passionate about.

The way the wool  was prepared at shearing time had a big impact on how it would be processed, she said.

The industry had moved a long way in recent years with strong connections between farmers and the brands they supplied wool to.

There was a much greater understanding of where the individual lines were going and what they were being used for.

Ms Bishop was also working with young people coming into the industry to help them get the best results.

Despite all her years in the industry, Ms Bishop remained excited about seeing everyone’s wool.

There were still so many opportunities for learning, and that was the beauty of the job.

"You never stop learning with wool," she said.

Farmers had a passion for the land and the animals they farmed. They loved talking about their wool.

"It’s the passion, the people and the places that make the job. I’m so lucky. Every day I love it."