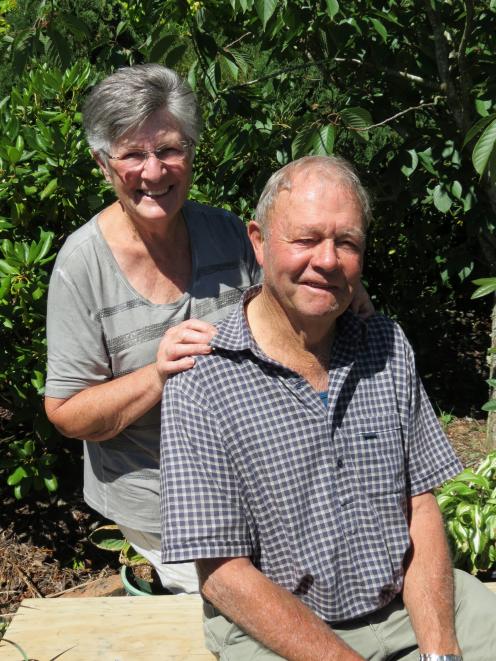 Anne and John Benington, of Lawrence, have farmed in the district for many years and are still involved with the business. Photo: Yvonne O'Hara
Even though he is 82, John Benington recently completed 57 consecutive lambing seasons. And he is intending to add to that number.

He still helps son Jamie on the family farm, Craigellachie Downs, near Beaumont, when needed, and he and wife Anne have their own smaller unit, near Lawrence.

Mr Benington is the third generation to live in the area.

''My grandfather on my father's side came from near Lincoln, Christchurch.

''My family on my mother's side came out for the gold mining so we have been in the country for more than 100 years.''

He left school at 15 and started working for his father, William, in 1950.

William had a traction engine, chaff-cutters and hay balers, but by the time he joined him, the traction engine had gone and in its place was a Hart Parr tractor, the first in the district.

It is now restored and in a collection in Edendale.

He recalled when the original Joss house at the Chinese Camp was moved into town.

''It was put on logs and at 4am my father pulled it with a traction engine to its new site.''

Another of the family's stories told of his father and another man being given buns in paper, which was a new thing then.

''One guy didn't know what to with the paper so after eating the bun, so he folded it up and ate it.''

Two years later he went shearing with Cyril Kleeber, and they worked throughout the district and into West Otago.

''Cyril had taken over the run from the previous fellow and he kept my nose to the grindstone.''

He said he would shear up to 200 sheep a day, receiving six pounds per hundred or about 12 pounds a day.

That was good money, as he had earlier turned down a farming job that paid two pounds 10 a week.

He and Anne met in Dunedin when she was working for the Post Office, and they married in 1964.

By 1965 they had sold the Brighton farm, which had become too small for the family, and bought the 500-acre farm (200ha) near Beaumont.

In the early days they ran about 1200 sheep, but as he developed the land they raised that to 1800.

In addition to the farm, Mrs Benington enjoyed gardening and she established a fritillaria bulb export business.

''I would grow them from seed and export the bulbs to a guy in Tasmania,'' she said.

''I did that for six years but then red tape got in the way.''

In the 15 years they have been on the smaller unit, she has worked hard to establish a spectacular garden.

They had two boys: Jamie, who is now running the farm, and Tony who is in Christchurch, and they have six grandchildren.