Reporter and television presenter Matt Chisholm and wife Ellen enjoy the Central Otago countryside alongside children Finn and Bede. PHOTO: ADAM BURNS
After more than a decade working as a roving reporter and television presenter, Matt Chisholm has returned to his roots and with his family in tow has relocated to rural Central Otago for a new life. Alexandra reporter Adam Burns spoke to him about the reasons for the move and how he has found the region upon his arrival.

If you are wanting to escape the New Zealand’s largest city, you could do worse than the Central Otago countryside.

Reporter and television presenter Matt Chisholm is living the dream, having made a permanent move with his family to the deep South.

Although he was initially hesitant about such a big move, the 43-year-old says it was a long-time dream he and his wife Ellen (35) had had to move to the region. 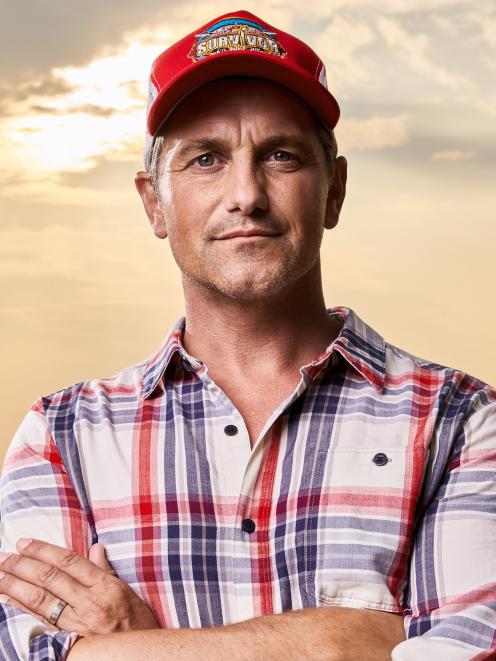 Matt Chisholm on the set of Survivor New Zealand. PHOTO: SUPPLIED
Originally from coastal Otago, he has always been at home in the country, as has Ellen, who hails from rural Southland.

The family had also been holidaying in the region for the past few years.

He announced the news that he was leaving Auckland over social media last year.

In a post on his Instagram page in September, he said the family had "a couple of paddocks... and plan on farming some children, rocks and rabbits".

He arrived in early December following a long drive from Auckland over a few days.

"After a while, especially when you have kids, you want to get back to the good things about life when you were really young," he said.

Mr Chisholm has been based in Auckland for the past 12 years, where he has forged a career at Television New Zealand (TVNZ).

He has worked as a reporter for TVNZ staples Close Up, Fair Go and Seven Sharp.

In 2017 he has hosted Survivor New Zealand and last year was a co-host on Celebrity Treasure Island alongside ZM drive presenter Bree Tomasel.

Four years ago, he bought a small block of land at Chatto Creek, 20km north of Alexandra.

The family then bought another block alongside it in 2018.

"We’re excited about building a house and buying some animals," he said.

"Breeding some little lambs and some calves, and spending more time with the kids and my wife."

The family are staying with Ellen’s parents near Omakau in the interim.

Having a healthy spread of family close by was another important factor, Mr Chisholm said.

"Every time I’m away on a story, or doing a show overseas, Ellen has to carry the can back home in Auckland by herself and that’s pretty hard yakka."

His older brother Nick — who has "locked in syndrome" after suffering a series of strokes on the rugby paddock 19 years ago — is based in Dunedin.

"Nick’s a big fan of the barbecue in the sun."

He said a trend among friends had been noticeable where residents were departing the bigger centres for the greener pastures of the countryside.

"But it is a big decision to make because for a lot of people that is where the work is.

"Someone said to me the other day you need to be doing something for your soul, and I think this place is just remarkably good for that."

Mr Chisholm’s job prospects in 2020 are still being worked through, but he has "a few things in the pipeline" which are awaiting the green light.

However, he was looking forward to being a "stay-at-home dad" in the interim, a role which his wife described as the "most important job of all".

Ms Chisholm said it was going to be interesting to see how her husband fares.

"It’s a full on job — two little boys — and Matt hasn’t done it fully on his own before.

"He’ll find out that it’s not just coffee dates and naps."

Ms Chisholm will continue to work as a writer and communications manager for a maternity activewear company.

"My boss is from Mataura so he understands our need," she said, laughing.

Their children had also settled into Central Otago’s "peaceful" surroundings, having already enjoyed their first days at the nearby playcentre.

"They’re sleeping in here, which they would never have done in Auckland," Ms Chisholm said.

The family holidayed in the United States for the Christmas break before returning to Central Otago to begin a new chapter.